These cinnamon rolls are soft and tender, need 1 bowl, and have a secret ingredient. Aquafaba! Aquafaba is the liquid from a can of chickpeas (chickpea brine), that can be used to make meringues and can be used as egg substitute in some vegan baking. You can make aquafaba at home too by pressure cooking dried chickpeas in water. The viscous water remaining after the chickpeas are cooked is aquafaba and can be frozen for future use. In these cinnamon rolls, the aqufaba adds moisture to the rolls and also helps them rise quicker and rise more for a quick cinnamon rolls treat.

Proof the yeast. Add the rest of the ingredients and knead into a dough. Roll out the dough using flour. Sprinkle your filling of choice. Roll up, slice and place in parchment lined pan. Let the rolls rise in a warm place (near your preheating oven). Bake and done. Use your favorite frosting. I like my frosting not too sweet and sugary, so I used cream cheese like cashew cream + lemon + cinnamon + sugar frosting adapted from the cashew vanilla frosting on my carrot cake. You can use any frosting or a simple Sugar + non dairy milk icing.

If you have time, use the 2 rise method as that makes the rolls even more fluffy and soft. Especially if you are using combination flours or all whole grain flours, as those flours need more extra moisture and airy yeast action to keep them softer and not dense. Glutenfree version here. Recipe video right above the Recipe widget. 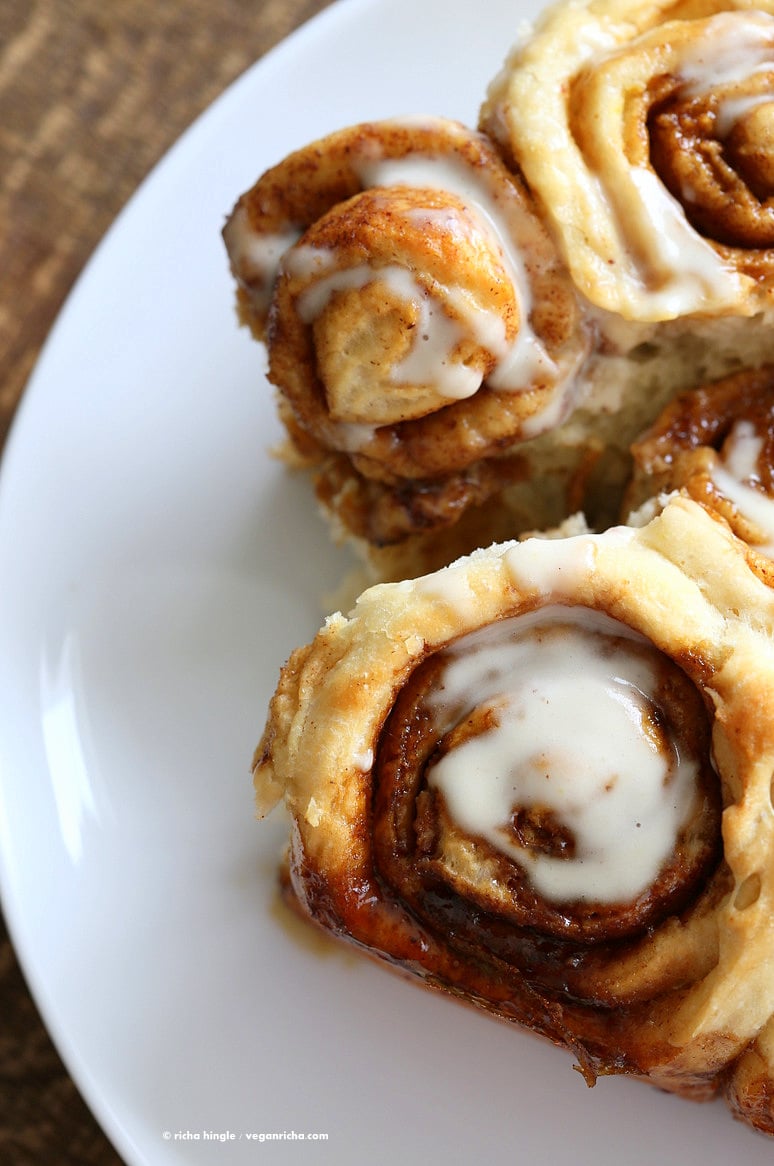 More Breakfast options from the blog

Jump to the Recipe

Another elephant rescued from horrible life in a circus and re-united with her sisters who had been rescued earlier! Onions. Great going Wildlife SOS.

Now the rolls. Make the dough with aquafaba (Find out what more you can do with aquafaba on the fb group here.). Not into aquafaba? use non dairy yogurt or use some lecithin. 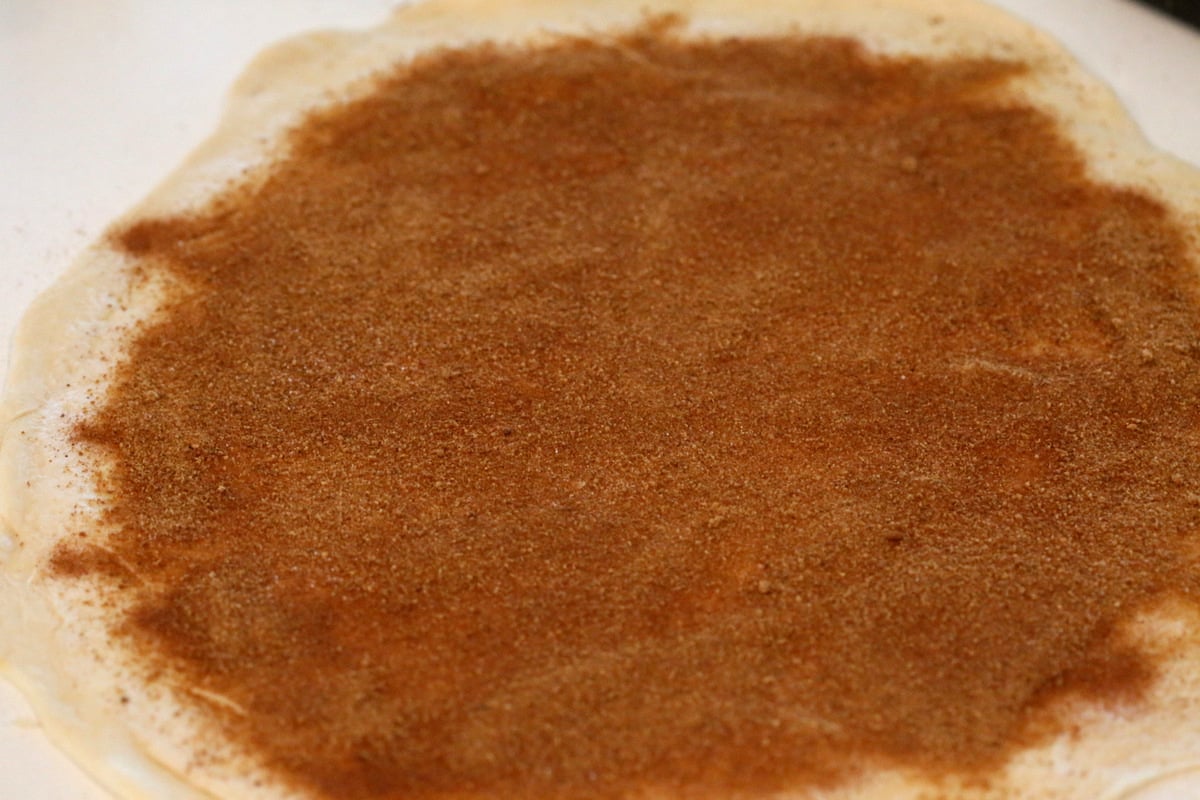 Roll up on the longer side. Slice. 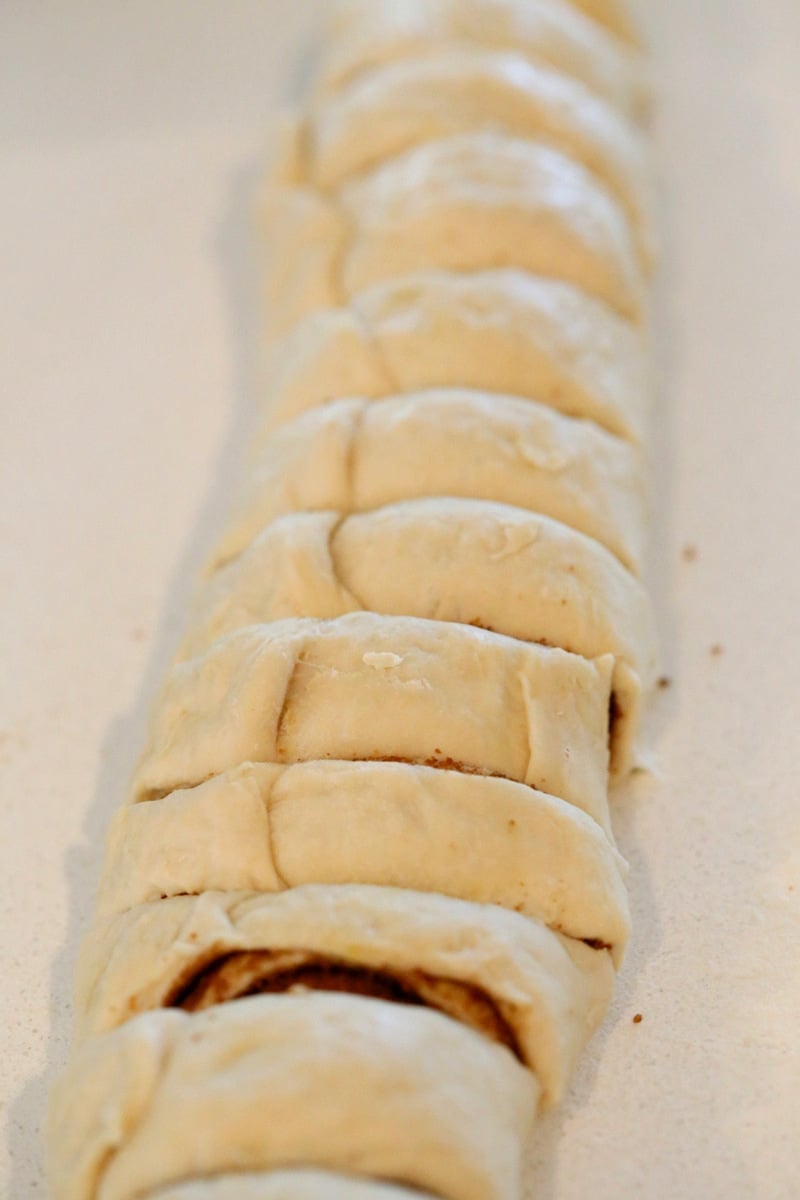 Let the rolls rise and double in size. 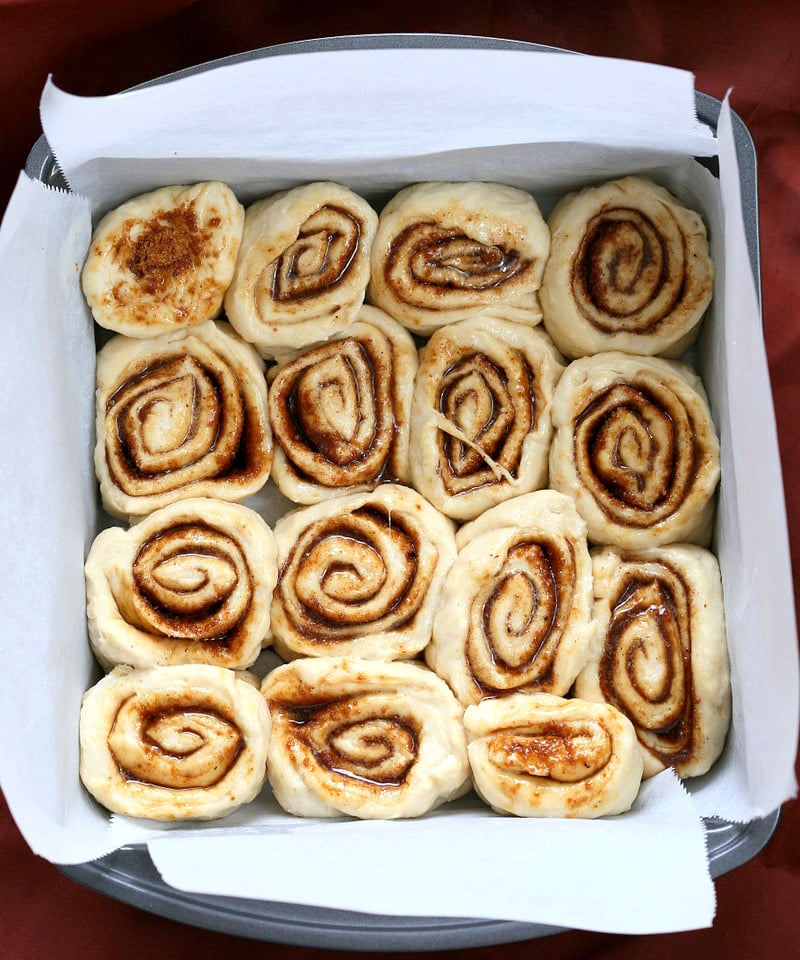 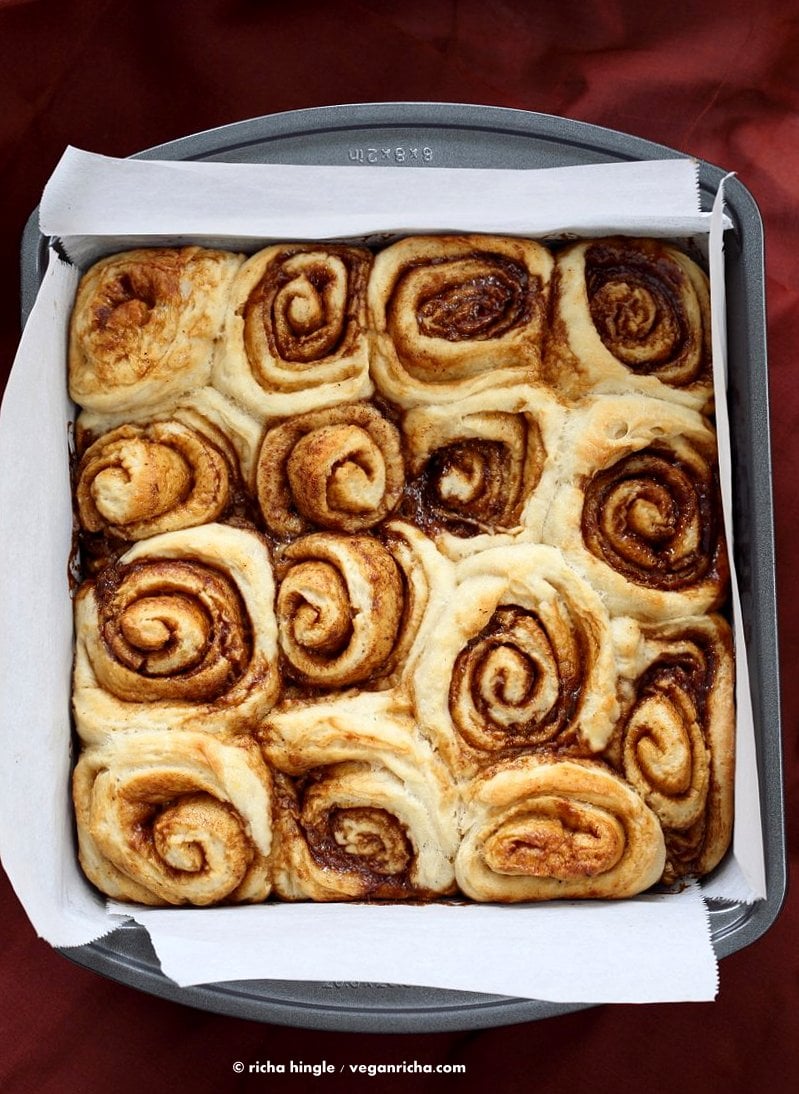 Cool for a few minutes. Then frost with your favorite frosting. Serve warm. Make these Aquafaba Vegan Cinnamon Rolls and let me know how they turned out! 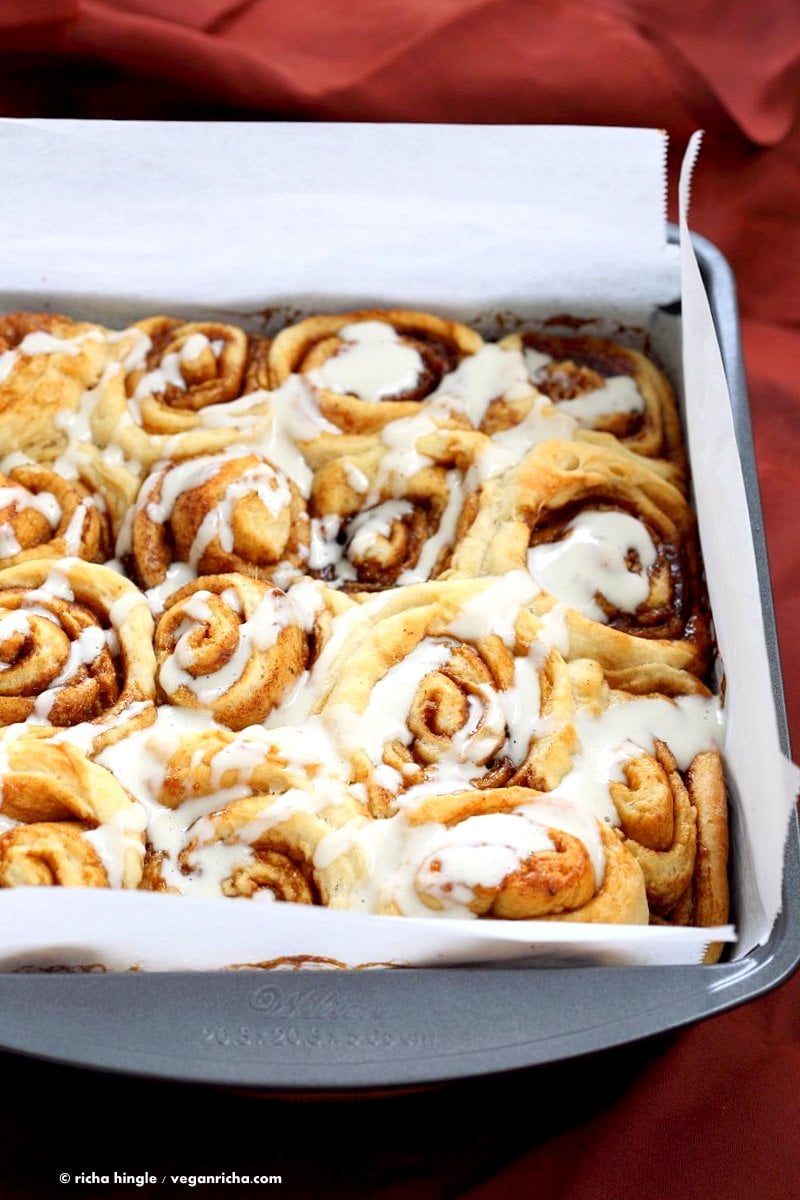 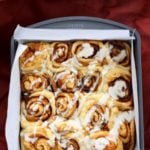 2 Rise method: Once you make the dough at step 2, cover and let it rise for 1 to 1.5 hours or until doubled. Lightly punch it down and roll it out and proceed. *If you have time, use the 2 rise method as that makes the rolls even more fluffy and soft. Especially if you are using combination flours or all whole grain flours, as those flours need more moisture and airy yeast action to keep them softer and not dense. Make ahead: Make the dough, let it rise for half an hour, then roll and fill, slice, put it in a baking dish. Spray with oil, cover with a wrap and refrigerate. Let it coom to room temperature(1 hour) then bake. Nutritional values based on one serving Glaze: Mix 1 cup powdered sugar, a pinch of salt, 1 tbsp or more lemon juice(for lemon glaze) or non dairy milk until smooth. Drizzle immediately on the cinnamon rolls.
If the glaze hardens on sitting, heat it in the microwave, add a bit more milk and use. I prefer the cinnamon cashew frosting from my carrot cake on these, thinned out a bit and with some more sweetener. Gluten-free version here 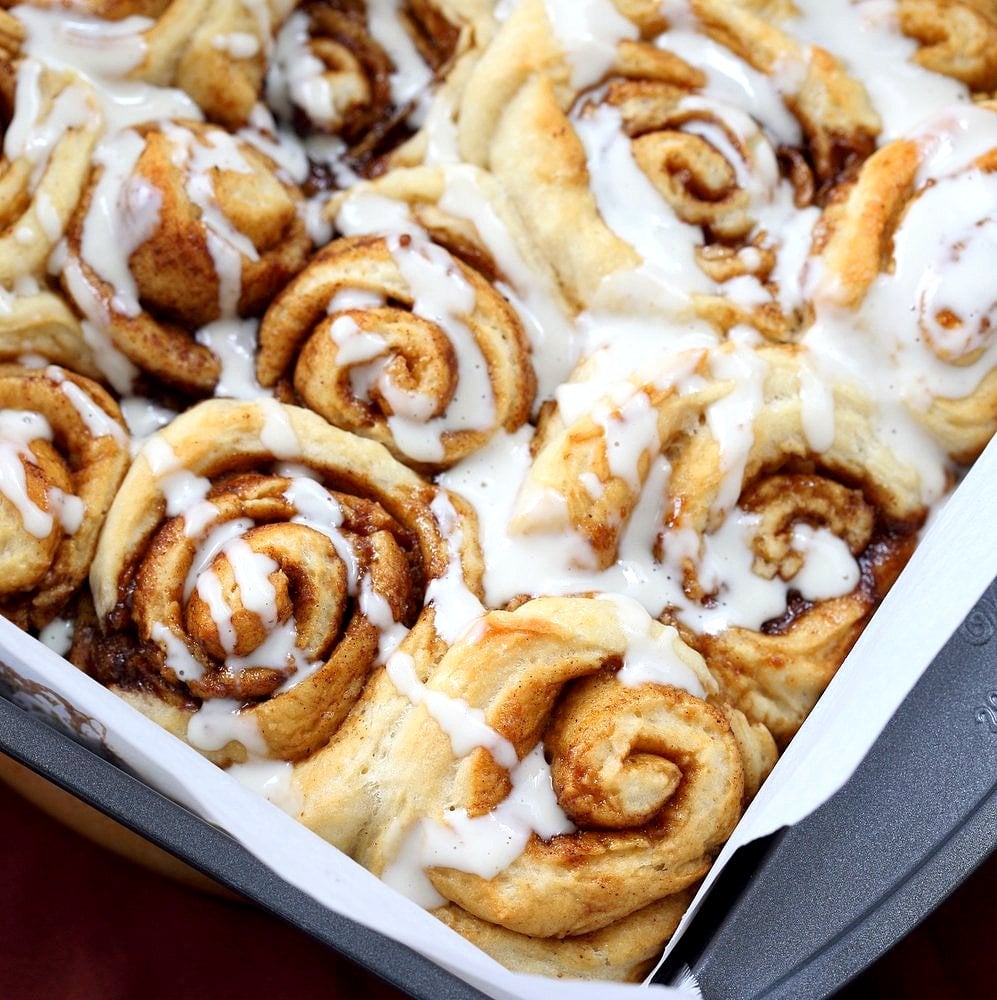