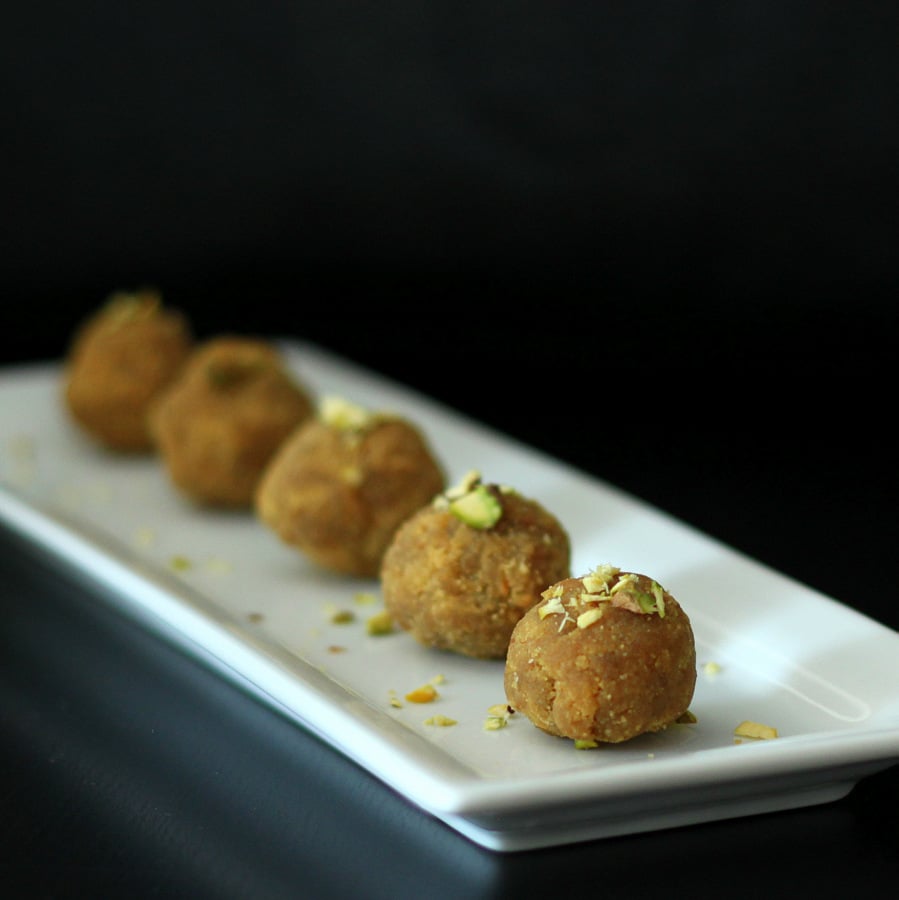 Another month, another festival! Another occassion to whip up some Indian sweets. Ganesh Chaturthi…is the Hindu festival celebrated on the occasion of birthday of Lord Ganesha, the son of Shiva and Parvati. Ganesha is widely worshipped as the god of wisdom, prosperity and good fortune and traditionally invoked at the beginning of any new venture or at the start of travel.
In Hindu-ism, a large number of personal gods (Ishvaras) are worshipped as murtis/idols. There are several gods, human incarnations of gods and so on. Whenever I write something about any festival or practices, I realize how little I know about the religion. 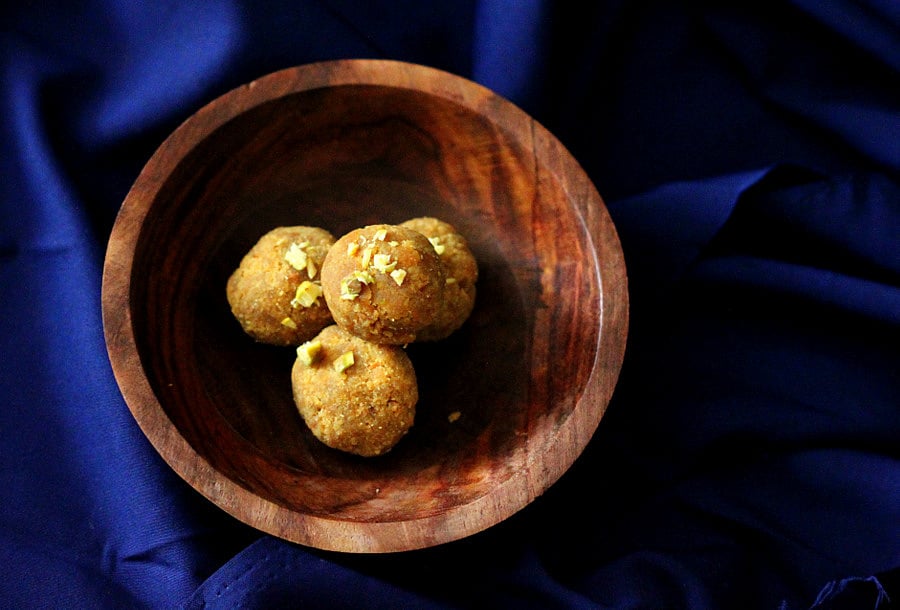 Lately, my internal questions about the gods and their practices has led to a lot of conflict. I think a lot of us go through something similar when our known religious beliefs dont necessarily gel well with our practiced beliefs. in this case, trying to be vegan in all possible ways.
For example, Traditional stories tell us that Lord Ganesha was created by goddess Parvati. Parvati created Ganesha out of sandalwood paste and breathed life into the figure. She then set him to stand guard at her door while she bathed. Lord Shiva returned and, as Ganesha didn’t know him, Ganesha didn’t allow Lord Shiva to enter. Lord Shiva became enraged, severed the head of the child and entered his house. After realizing that he had beheaded his own son, Lord Shiva fixed the head of an elephant in place of Ganesha’s head. In this way, Lord Ganesha came to be depicted as the elephant-headed God.(This is just one of the stories among many)
Its confusing, isnt it. Why would a God be so enraged, then take a child’s life and then to bring the child back, take an elephants life. Dont ask me, I am as confused as can be. The answers might lie in the Hindu texts and scriptures, which I guess I will have to start reading.
Till my mind figures things out, everyone around us and we as a family, continue to celebrate the occassion. To celebrate being together, to celebrate the fortune and wisdom that has been bestowed upon us, to celebrate the goodness around. One of the sweets that makes an appearance during the celebration is a ghee laden Chickpea flour Laddoo. This one is dairy free. You can find my Chickpea flour and Semolina Laddoo from last years celebration here. This recipe is glutenfree and is lightly adapted from Dassana’s Besan Laddoos.
Steps:
1/4 cup chickpea flour ready to be roasted. Yes, i make small quantities, since between the 2 of us, we hardly ever finish any sweets, except probably chocolate 😉 I will make a larger batch on the weekend if we visit friends. 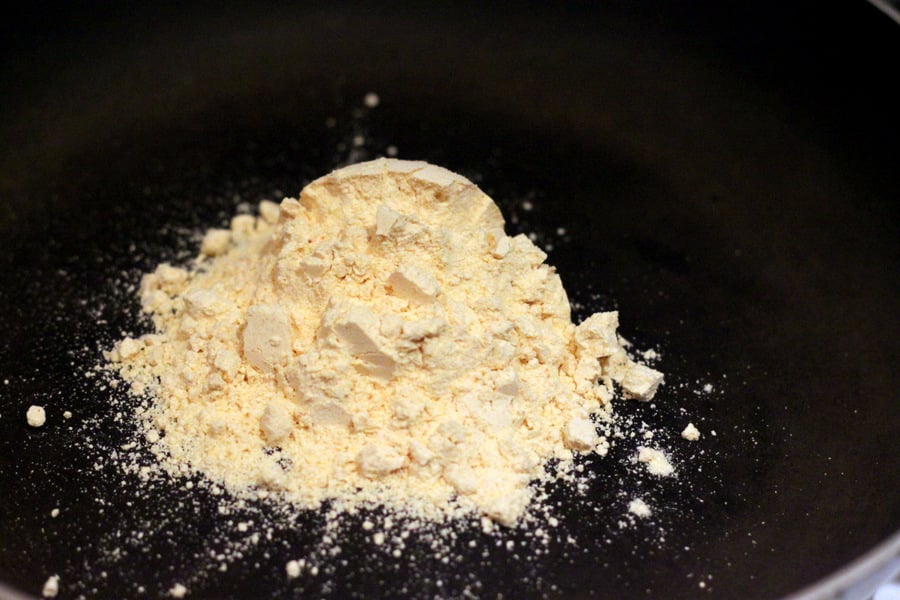 Roast for 5 minutes, then add cocoa butter and coconut flakes and mix. 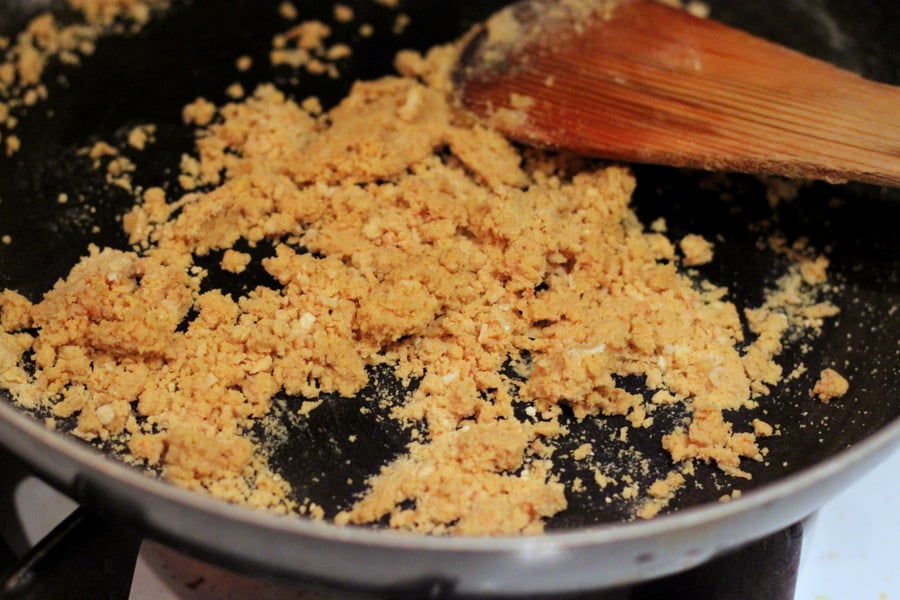 Roast on and on until the chickpea flour darkens and leaves a nutty aroma. 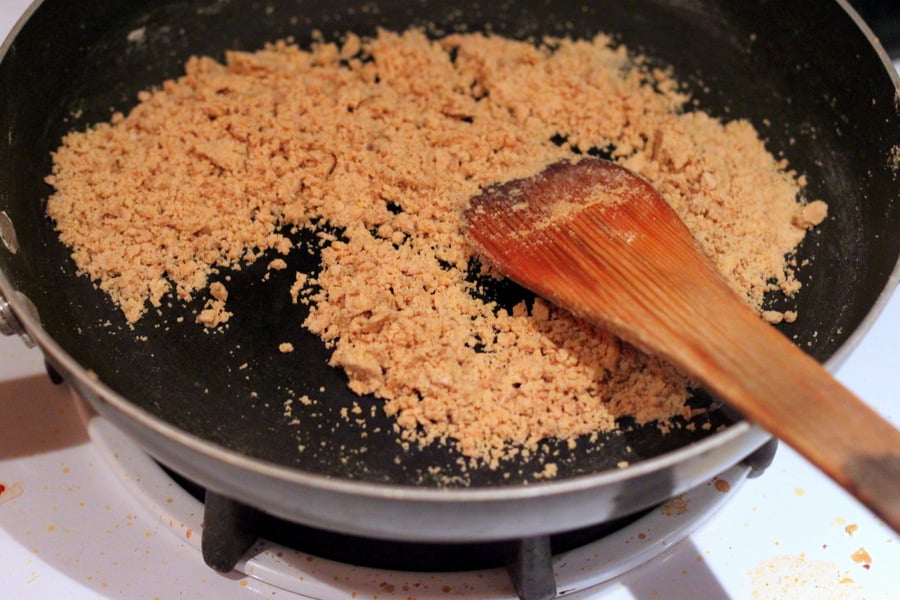 Add coconut milk and mix to form a lumpy mixture. Add less or more. Take off heat and cool for a minute. 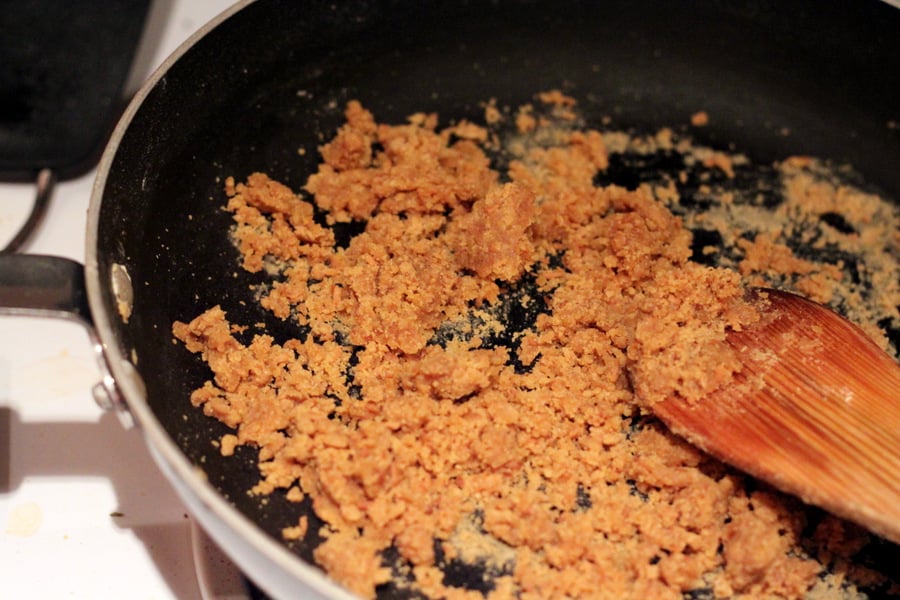 Make balls when the mixture is cool enough to handle. The mixture does tend to get crumbly as it cools because of the low oil content. To make balls of a cool mixture, warm the mixture on stove a bit, add a bit of oil or maple/agave syrup and form balls. 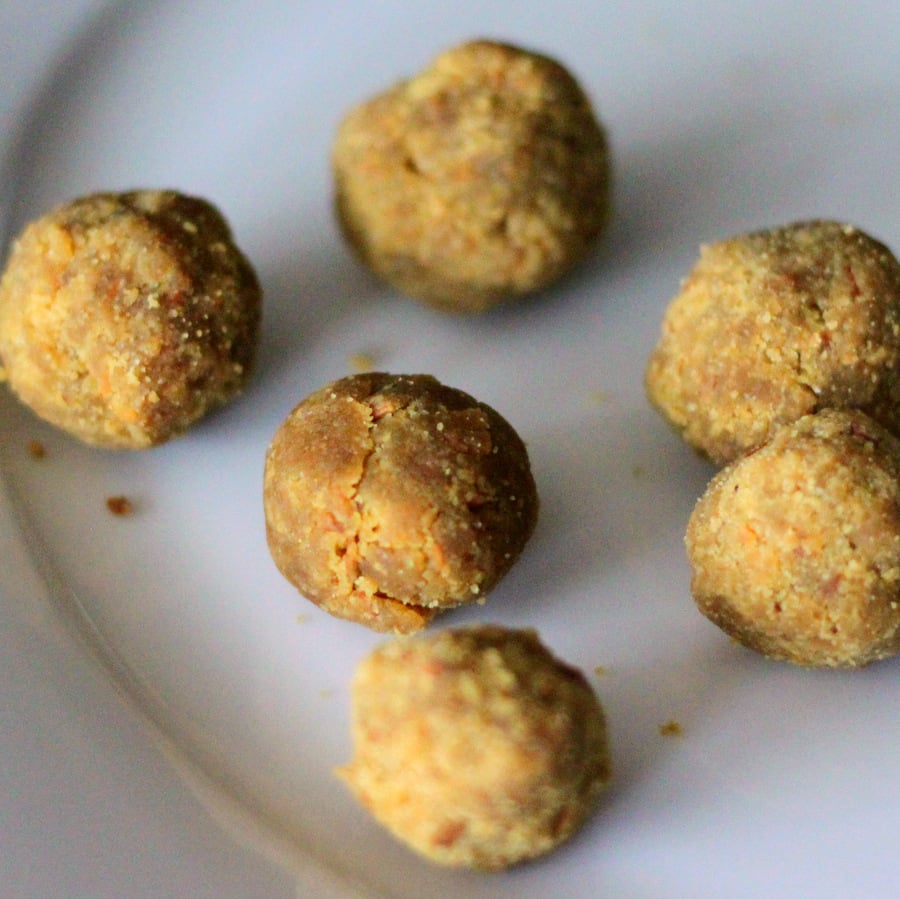 You can make a fat-free(oil free) version like this Wheat laddoo recipe.
And for more vegan-ized Indian sweets, see the collection here.
Sweet deliciousness. 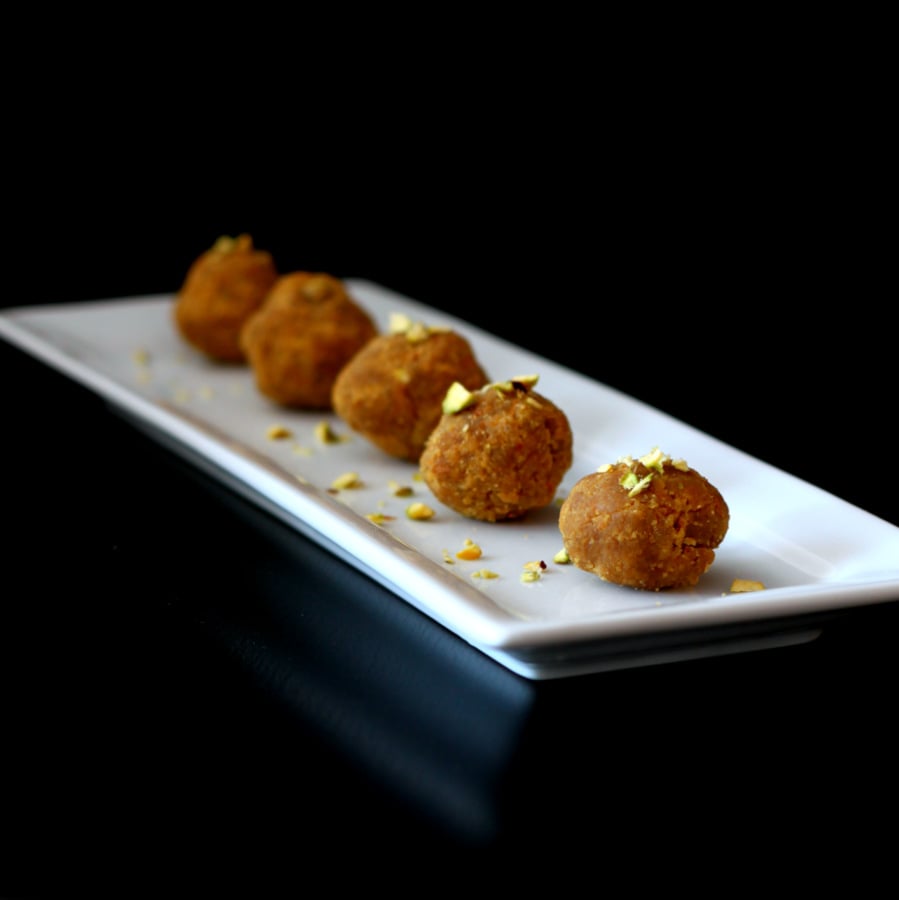 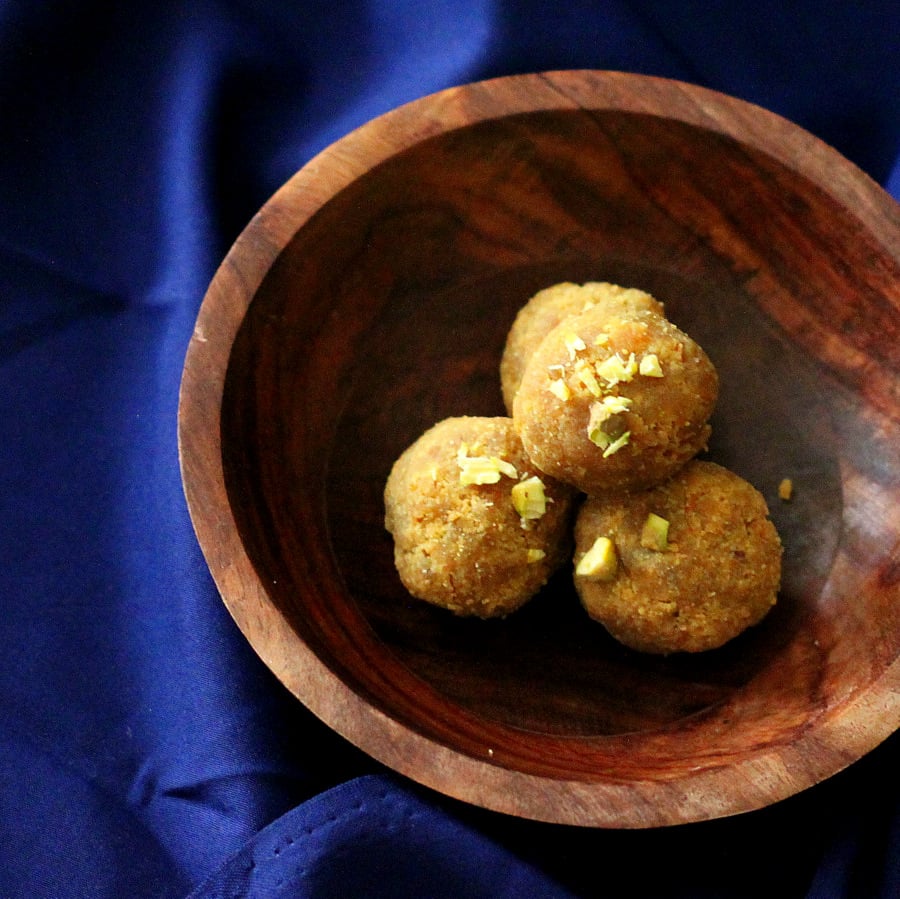