There are several Indian sauces and curries that are generally used with some kind of meat or Paneer cheese. For all of those Tempeh, Tofu, cooked chickpeas, beans or veggies are a great substitute. Dhaba means road side restaurant or a small restaurant that is on the highways and serves local cuisine. Dhaba chicken (Dhaba Chicken curry) or Dhaba any meat is a simple sauce with few spices, loads of onion, tomato, ginger and garlic and oil that has been slow cooked. I made my Dhaba meal today with Beyond chickn strips. 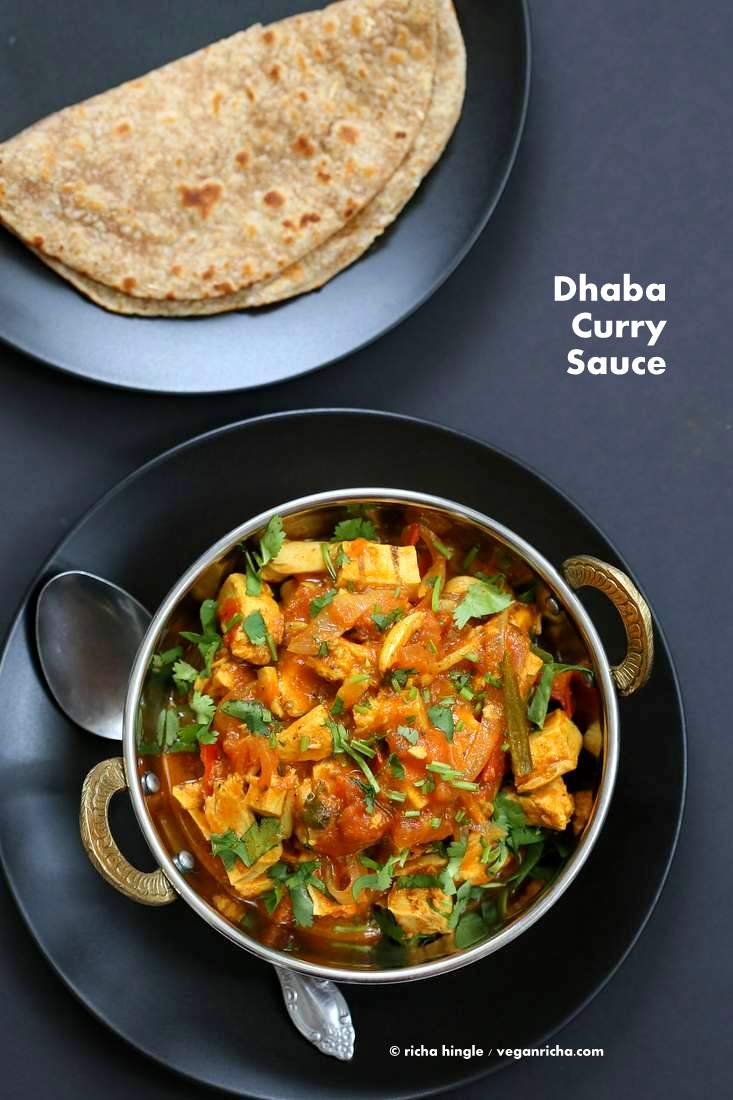 Many of us eat plant based food not because we do not like the taste of meat but because we know where it comes from and would rather not responsible for killing a sentient living being. Enter Beyond Chicken. Beyond Meat has a great line of fake meats, some of which are gluten-free. Most of those can be directly substituted in a regular recipe with fantastic results.

Hubbs loves his chickn like food when it does not come from suffering or death, while I prefer tempeh or veggies to fake meats. I do try all the fantastic meat subs to know about the options for hubbs. When I try some and make a face, he knows that he will love it, because I find the product too close to the real deal :). I like vegan cheeses though, and understand the allure of vegan versions of things we grew up eating. Use whatever plant protein you like in this recipe. 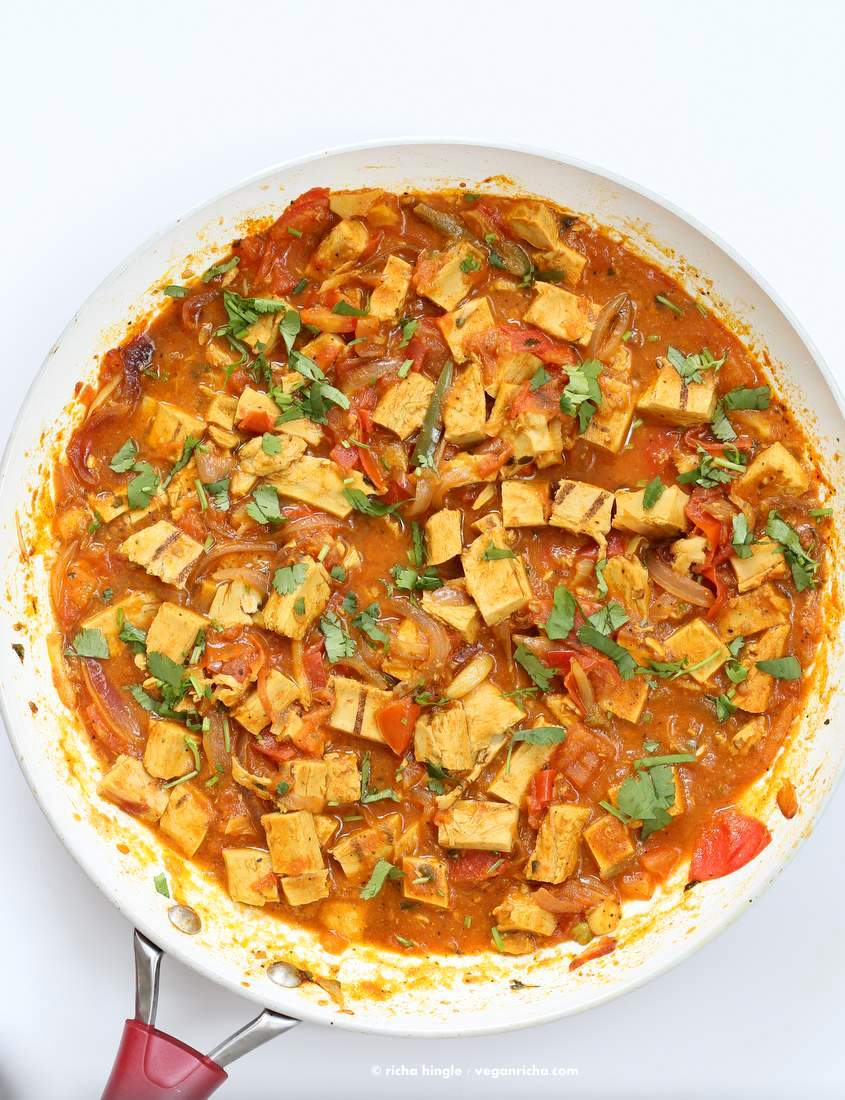 More Indian Mains from the blog

Every time I post something which is similar to or has a name of meat (chicken, meat, bacon etc), there is a bunch of yell-y comments about how it is a turn off and offensive. And how much ever I try it gets to me. I am human after all. but I do not want to be scared of using whatever names I want.

Here is what I think of the topic. If we have a problem with what something is called, say chicken or bacon, then we should have a problem with almost every food label. Every vegan cheese, yogurt, cream, butter, ice cream, milk, vegan alternative for anything should not be called vegan “same thing”. But then what do we call it. What does anyone who is looking for vegan versions of things search for on google? Vegan congealed cashew? Vegan thick cashew and water? Vegan strips of soy protein? vegan fibrous things? vegan thickened oily spread? vegan smoky crispy chewy things? There are no standard plant based names for them.

The point here is that there are established terms that have been used for food for ages. These terms have been used focussed on animal ingredients because of the food industry, the marketing and what not. But we plant based eaters can claim the terms as well. After all what does coconut meat mean? It isnt animal meat. Why does Ice cream have mean dairy milk frozen food, why can it not be anything which is creamy, frozen dessert. Vegan Chicken/chikin/chikn strips are strips of textured protein. Coconut Bacon is chewy smoky toasty coconut which tastes like bacon. Yogurt is just cultured milk, milk which can be anything that is white liquid, which may or may not be from animals. So the next time someone mentions yogurt on a vegan blog, we can assume that it is non dairy yogurt.

Also, as a blog I know that search is a powerful tool. If someone comes to this page searching for dhaba chicken curry and makes this recipe and likes it, its a win for the chicken that did not die that day. So please use that anger against names for a better cause. 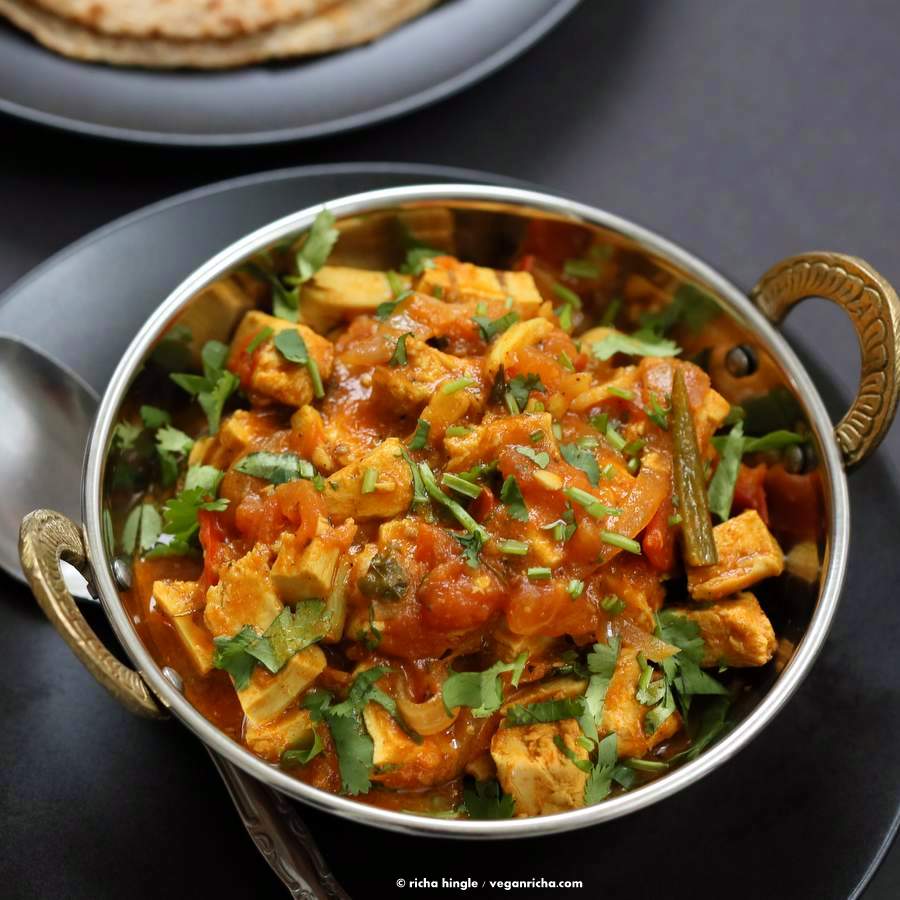 In other news, check out The Purple Carrot plant based delivery service that services Boston to South Carolina and  west to Chicago. They deliver pre packaged materials for your meal that you can throw together and eat freshly made. Check out my White Bean Quesadilla on this week’s menu.

Cook the onion, garlic, ginger and chili until translucent. 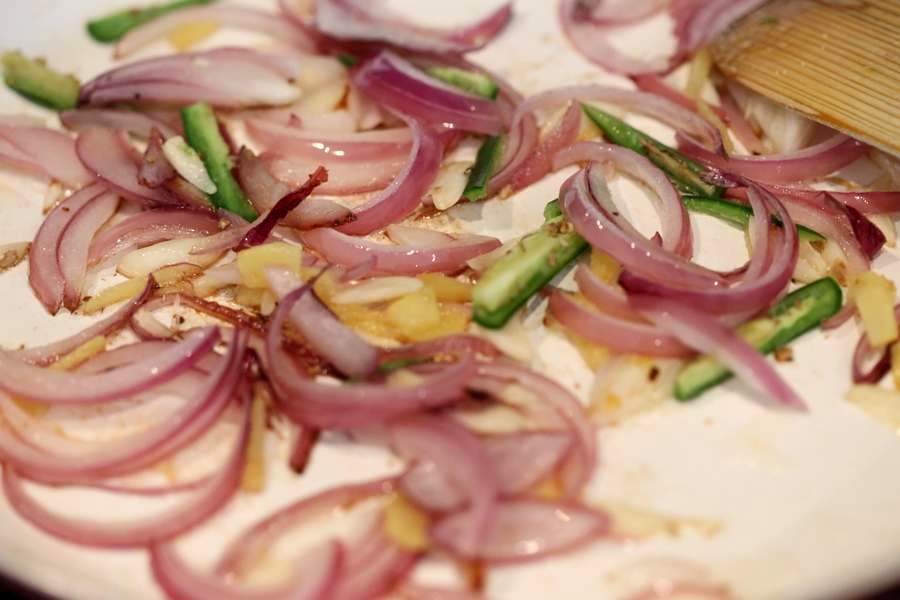 Add tomatoes, spices and dried fenugreek and cook until saucy. 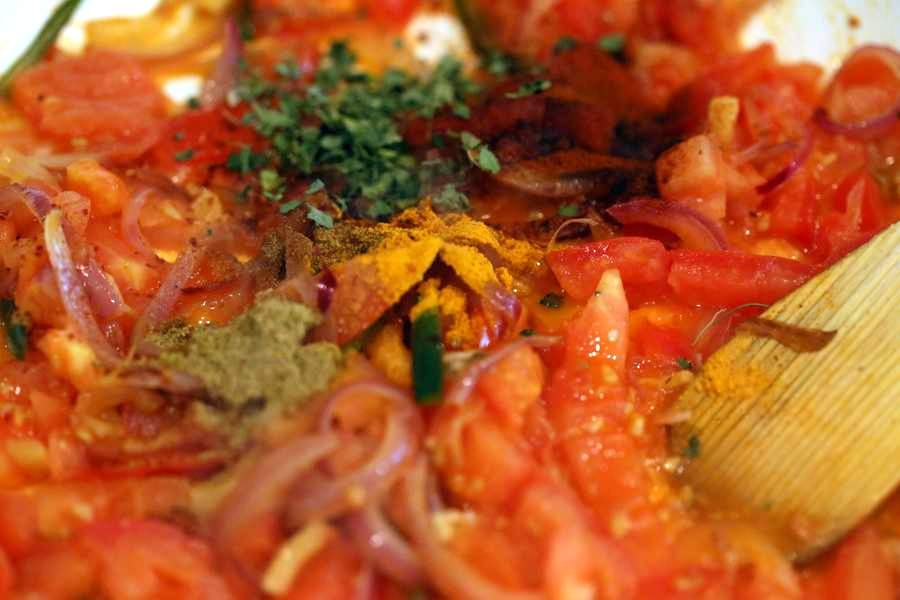 Add marinated beyond chickn or other meat sub of choice. 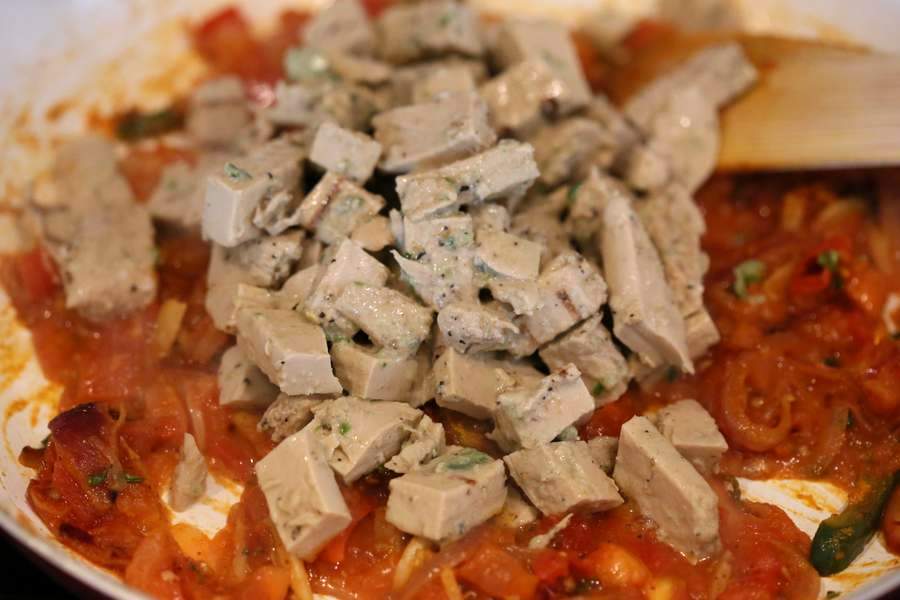 Simmer until the sauce thickens and the house smells like an Indian restaurant. Serve hot with flatbreads or rice.

20 gm of protein per 3 oz serving in these strips! 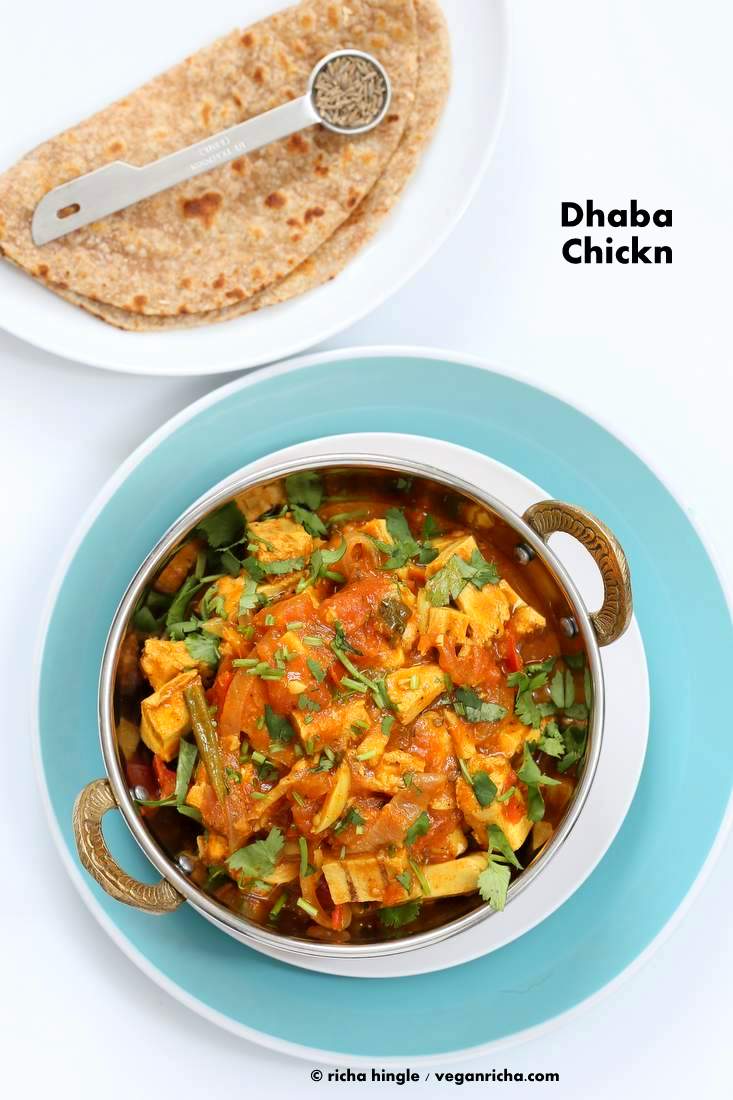 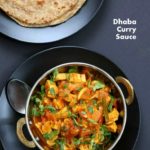 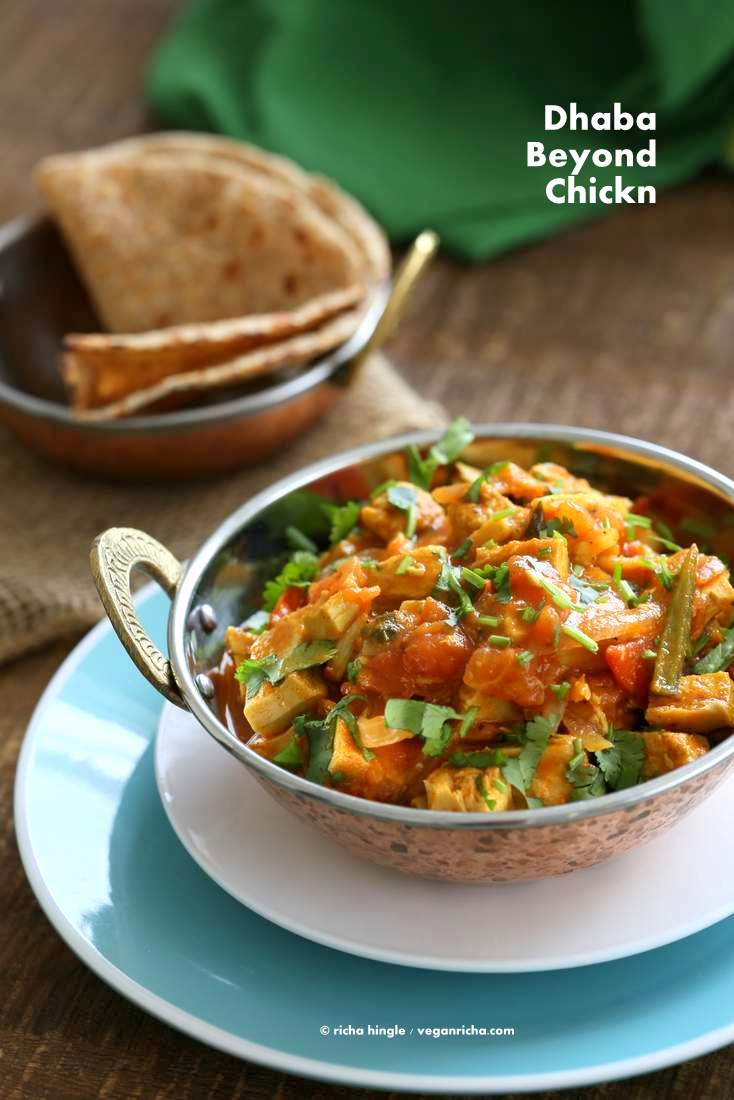