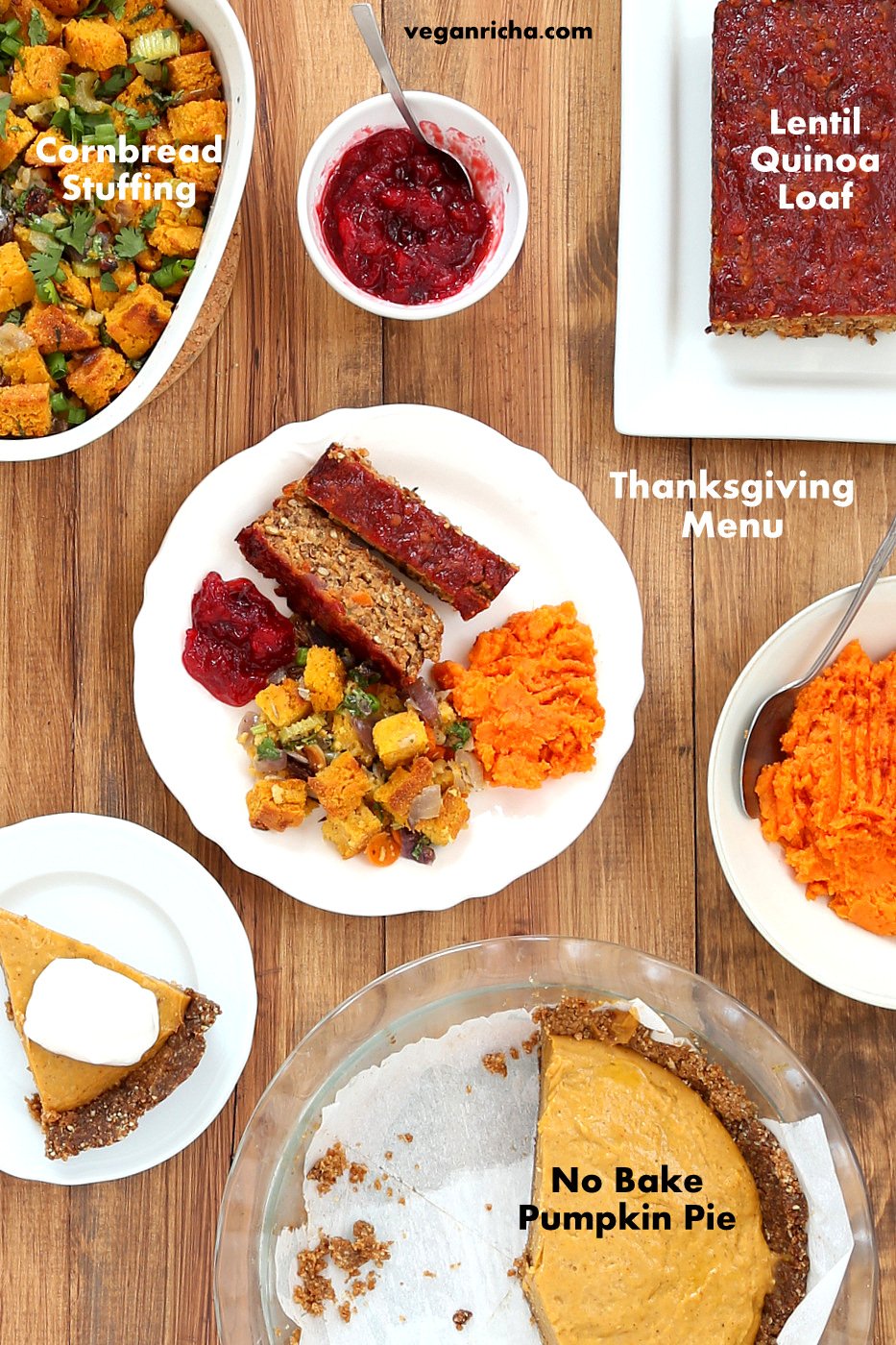 So the other day I decided I should cook up the whole deal in one day. That usually does not work out very well for me. 🙂 I went to the kitchen and decided I will stop when I want to. Anywho, I made a plan in my head, got the recipe outlines together and started making the Lentil loaf and stuffing and went on from there. I ended up stretching my limit a bit to make the cranberry sauce as well in the end. I had the whole spread done in 2.5 to 3 hours. Now that included some rest time in between. I had the Pumpkin Pie that i made 2 days before, so the spread worked out really well.

The Lentil Quinoa Loaf is fabulous with the glaze. The Cornbread Stuffing is made with Pumpkin Cornbread which keeps the cornbread quite moist and the usual stuffing veggies. With a side of mashed sweet potatoes with cinnamon and a hint of heat from the cayenne, and an easy cranberry, orange juice, jalapeno sauce.

I put my lentils and sweet potatoes to cook on the stove around 1 pm and went about chopping up the veggies and getting other things ready. Once the lentils+quinoa and sweet potatoes were done, they cooled off on the side while I cooked up the veggies for the loaf and cornbread. After the veggies were done, I mixed up the pumpkin cornbread and put it in the oven. Then mashed them potatoes. Then mashed up the lentils with the veggies and shaped the lentil loaf. Cornbread was done, so lentil loaf went in the oven, while cornbread cooled a bit to be crumbled into the stuffing. Once the loaf was done, the stuffing went into the oven to crisp up. Enough time for the Loaf to cool and be sliced. Everything on the table! Wait Cranberry sauce. Yep made that as well. Stretched my limit a bit. Took a break and then had to hurry to take some pictures before it got dark.

You can make a soup or another side from my earlier Thanksgiving round up, a day in advance, reheat and serve.

Make my No Bake Pumpkin Pie with Gingerbread crust or this Chocolate Pumpkin Tart in advance as well! both Gluten-free and soy-free. Just Slice and serve. 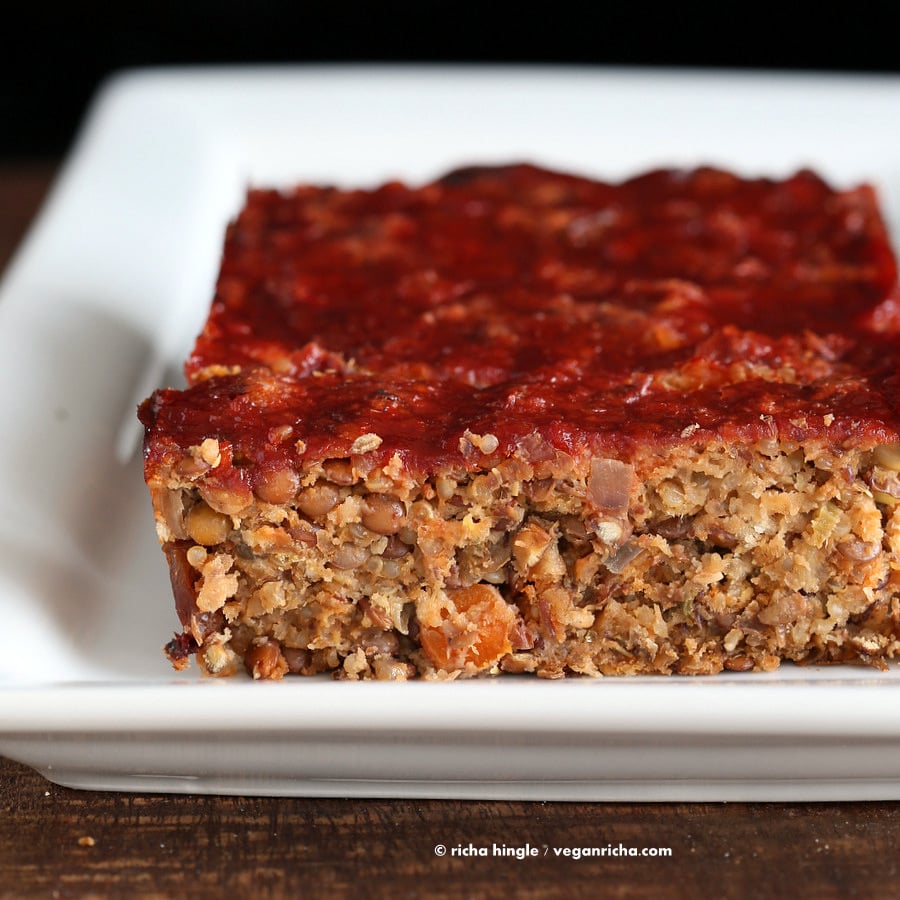 With Lentils and quinoa, thats a whole lot of awesome meatless protein!

Cook the lentils and quinoa. 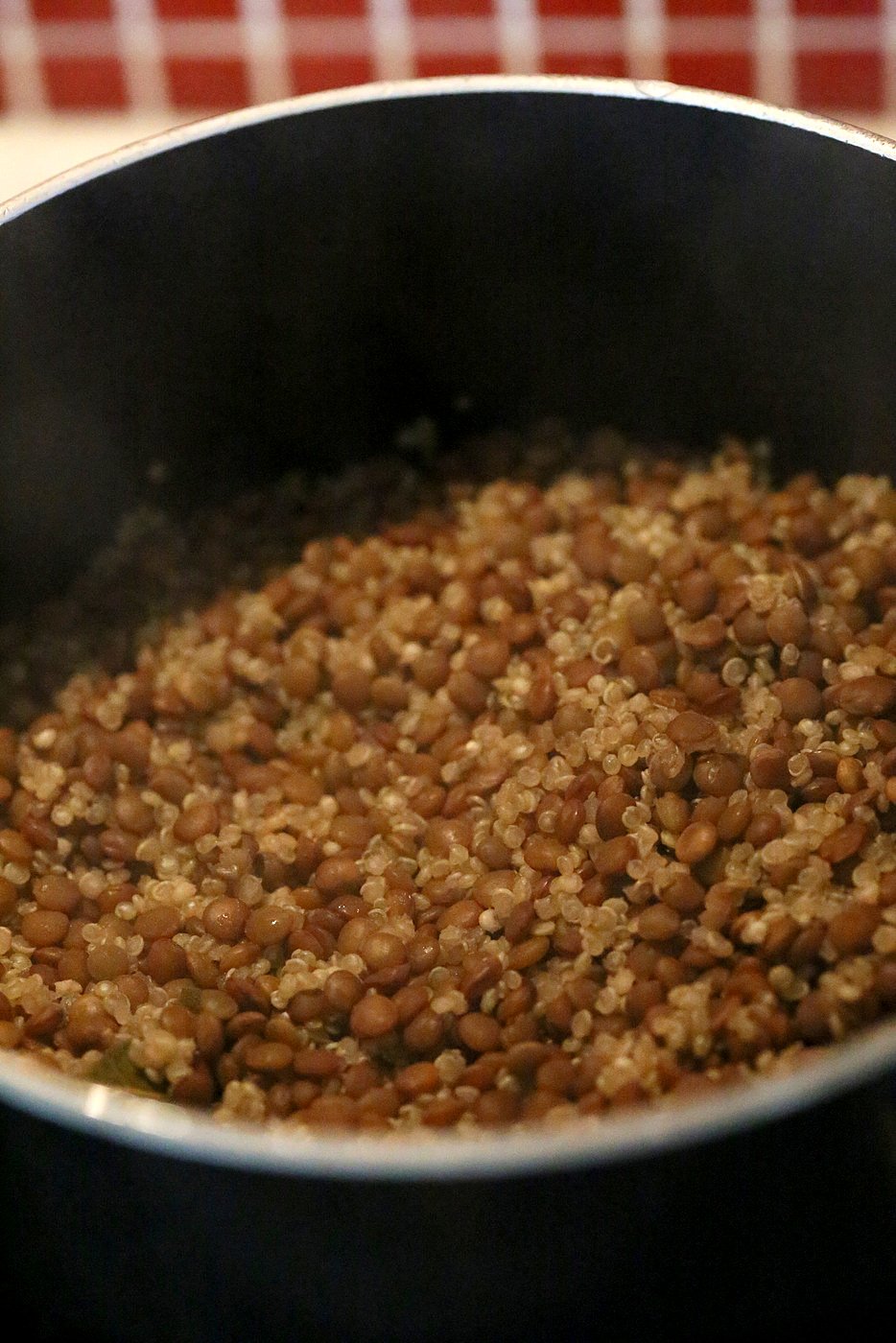 Cook the veggies and add to lentil quinoa mixture. Then mash and mash. 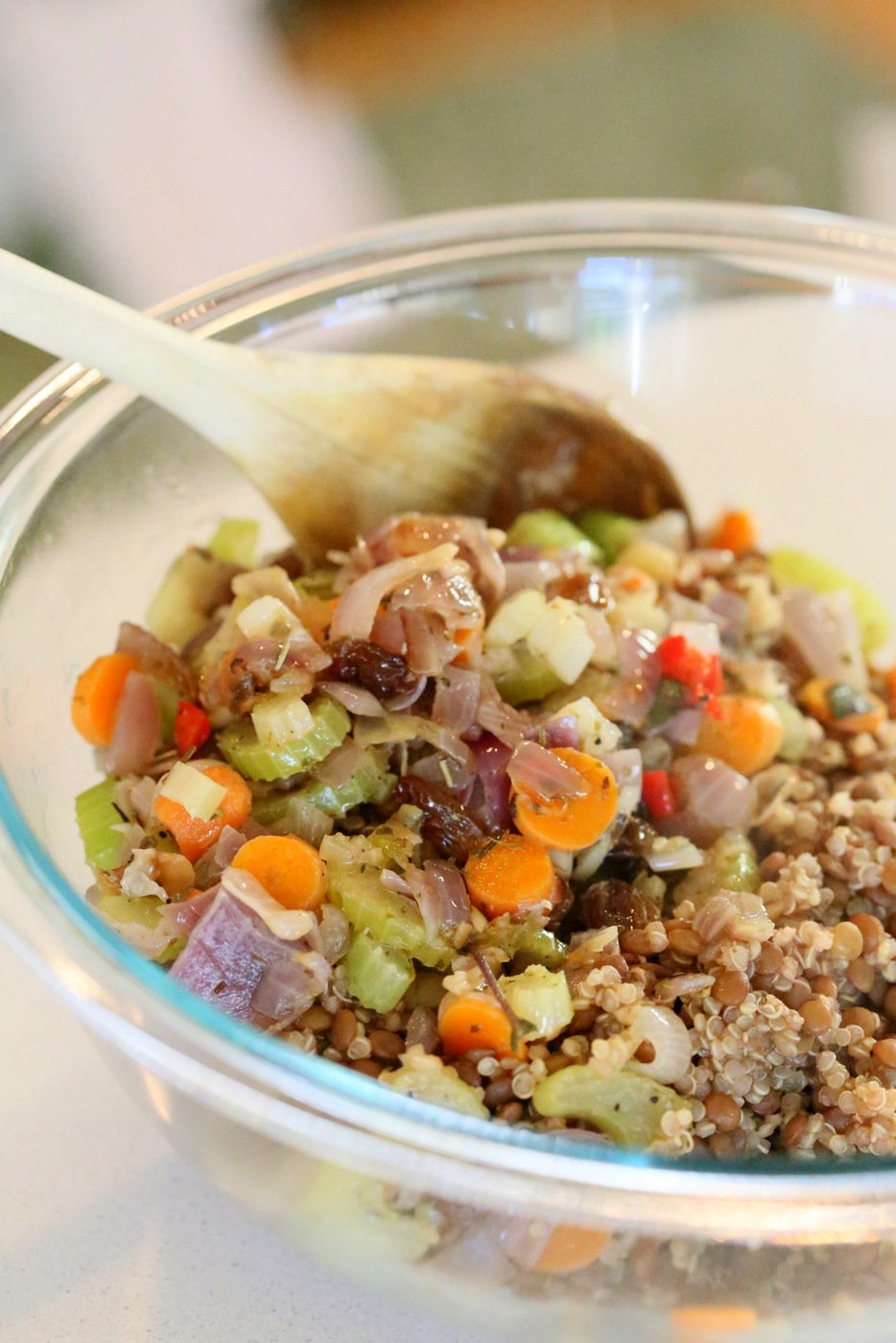 Add the sauces, flavors and mix in, add in the breadcrumbs and mix in. 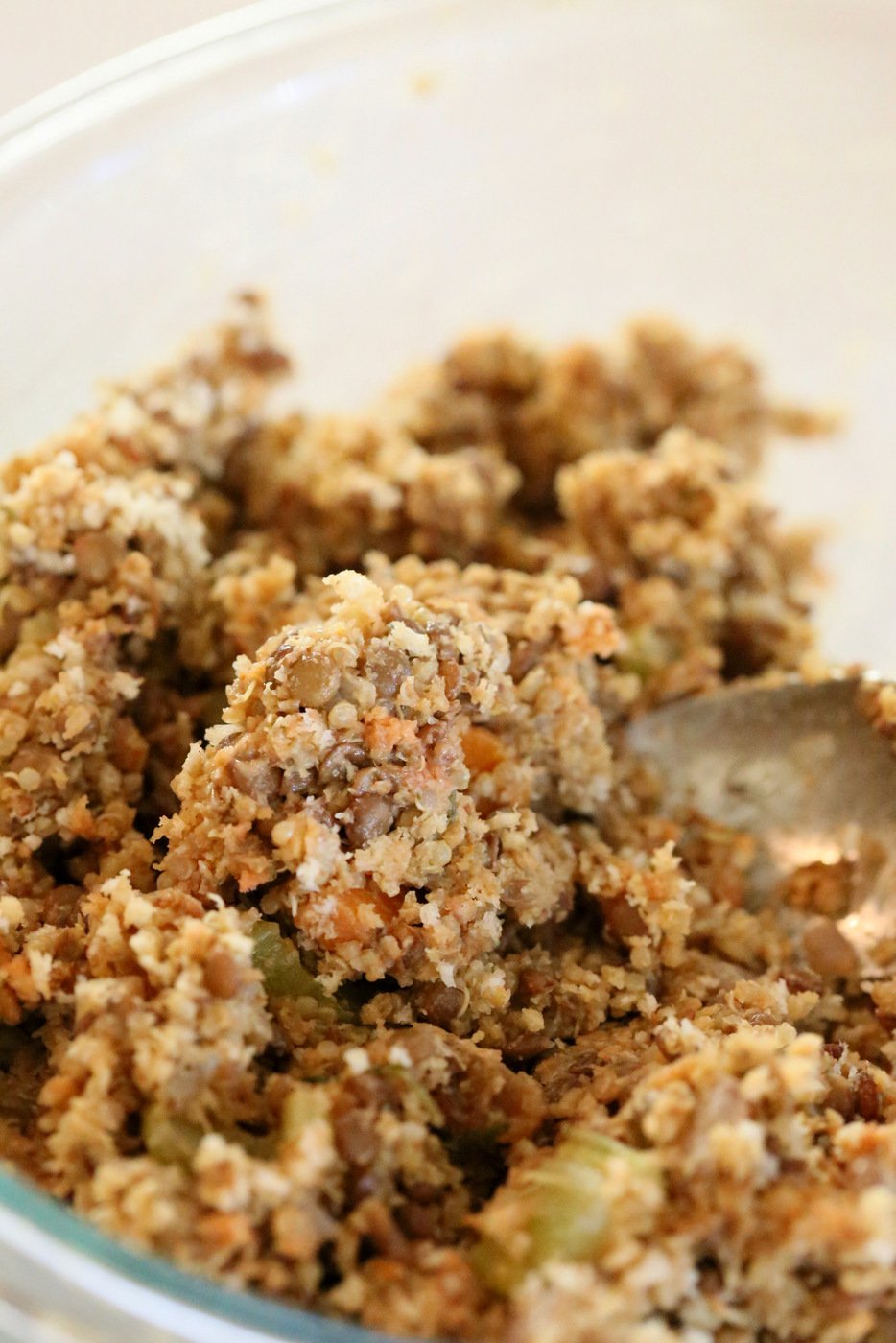 Tightly pack it in a loaf pan. 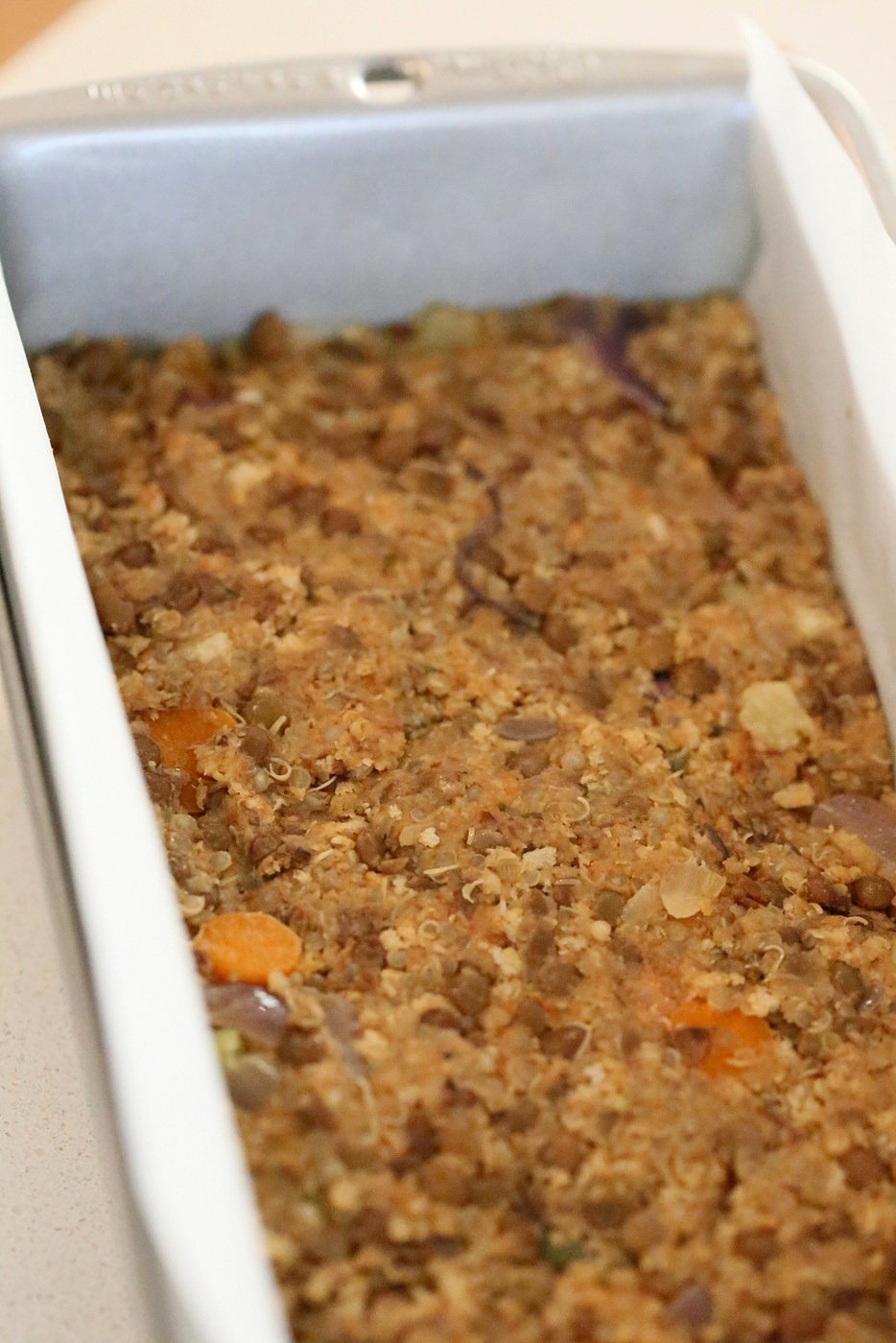 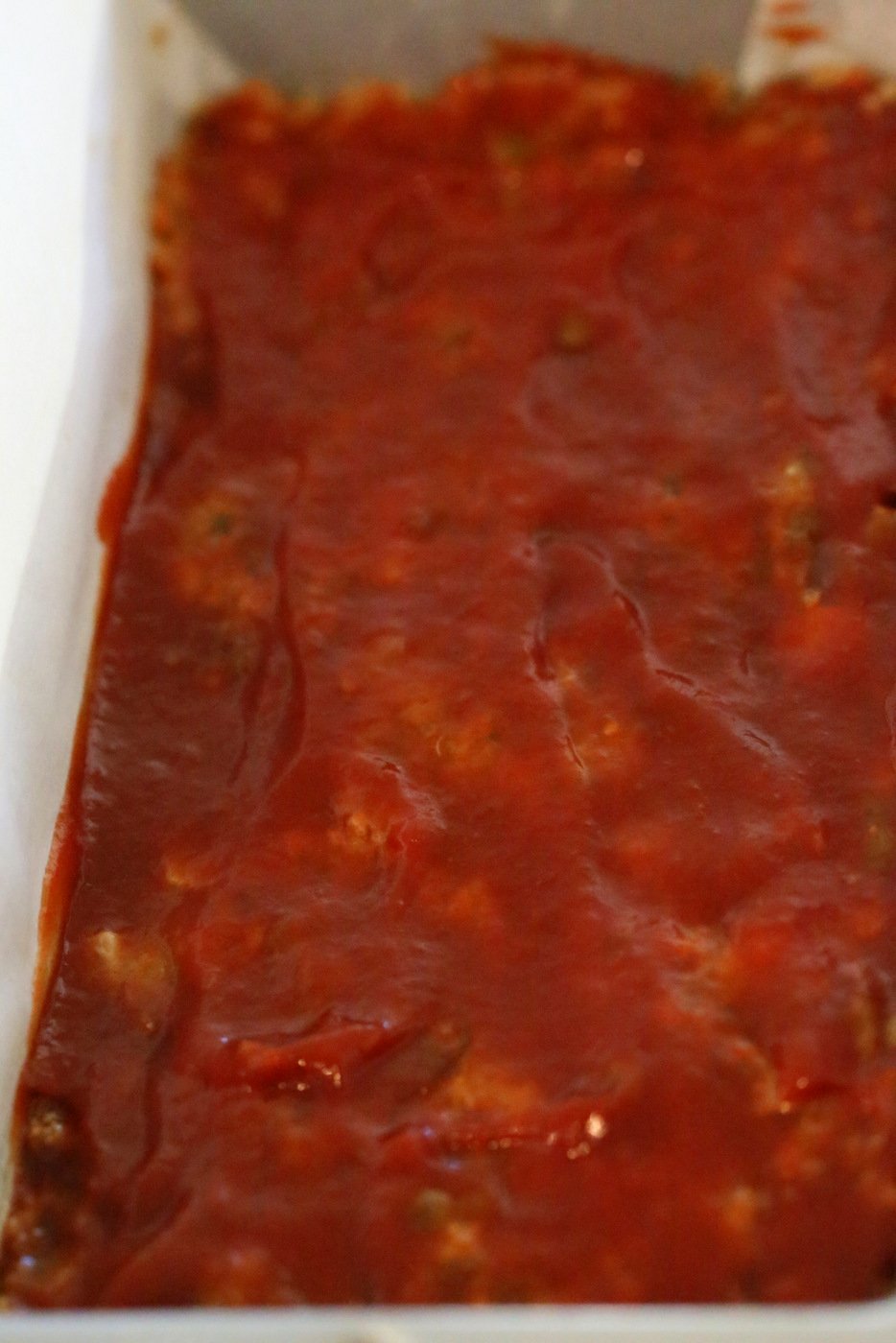 Cover the loaf with foil. Bake. Cool, slice and serve.

Allergen Information: Free of Dairy, egg, corn, nut. Can be made soy-free, gluten-free. Serves 3 to 4

–> Print or Save Recipe here. 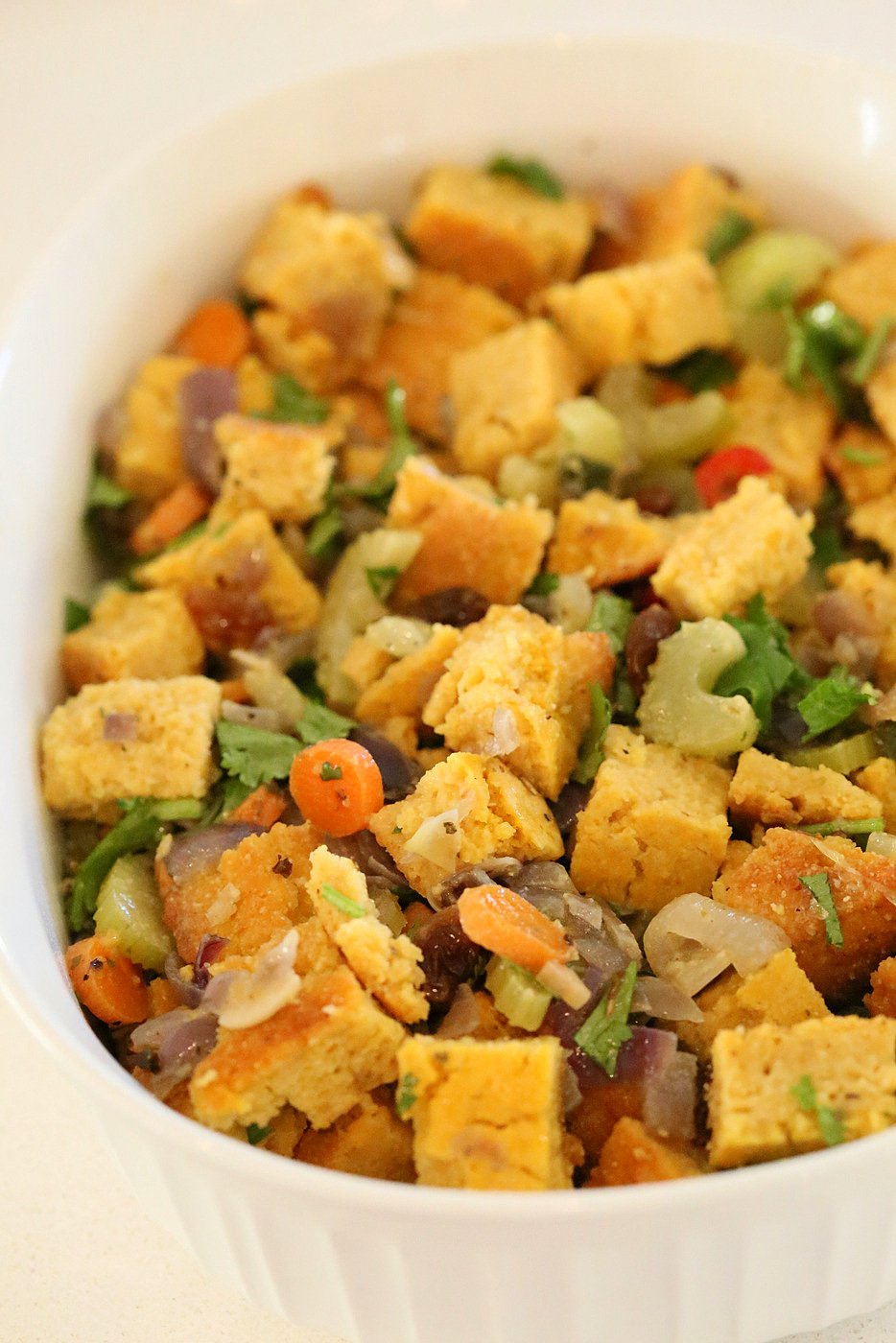 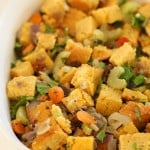 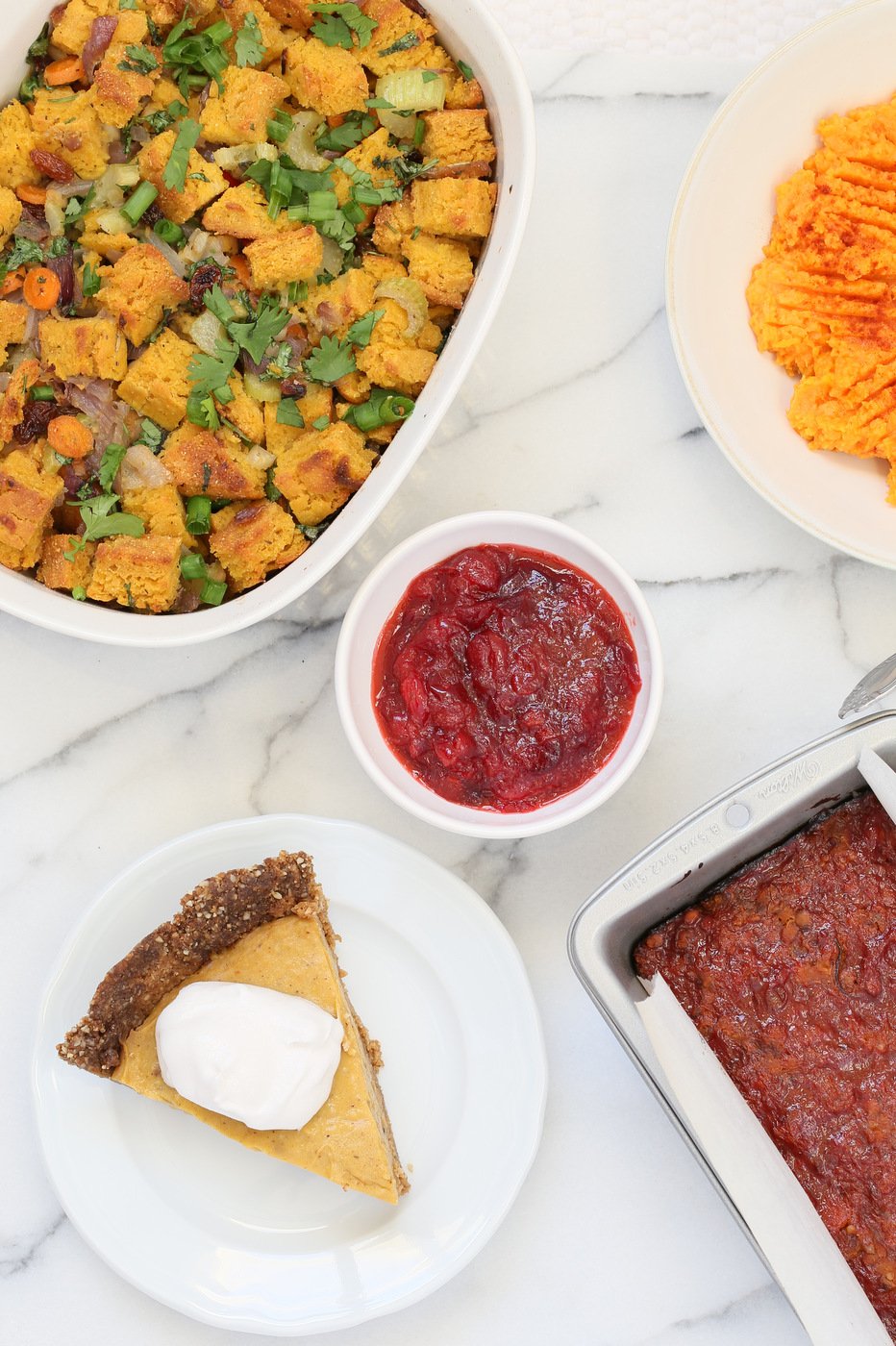 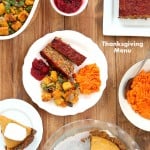 nutrition based on one serving 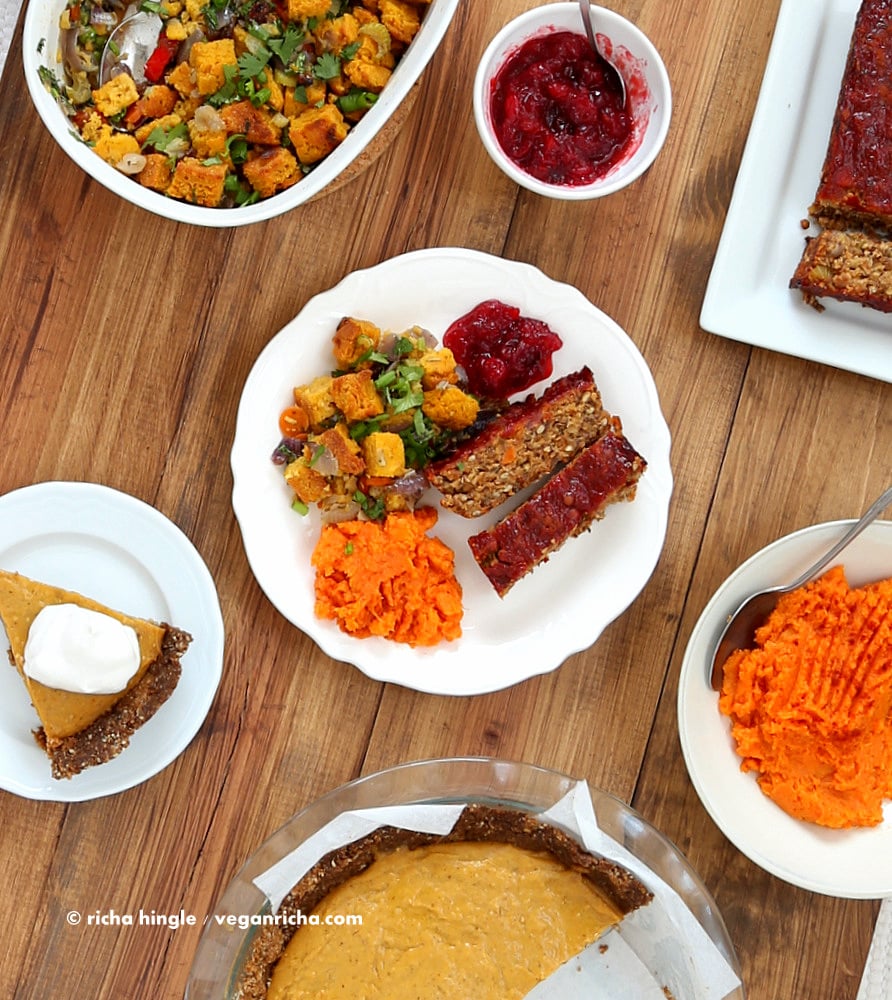 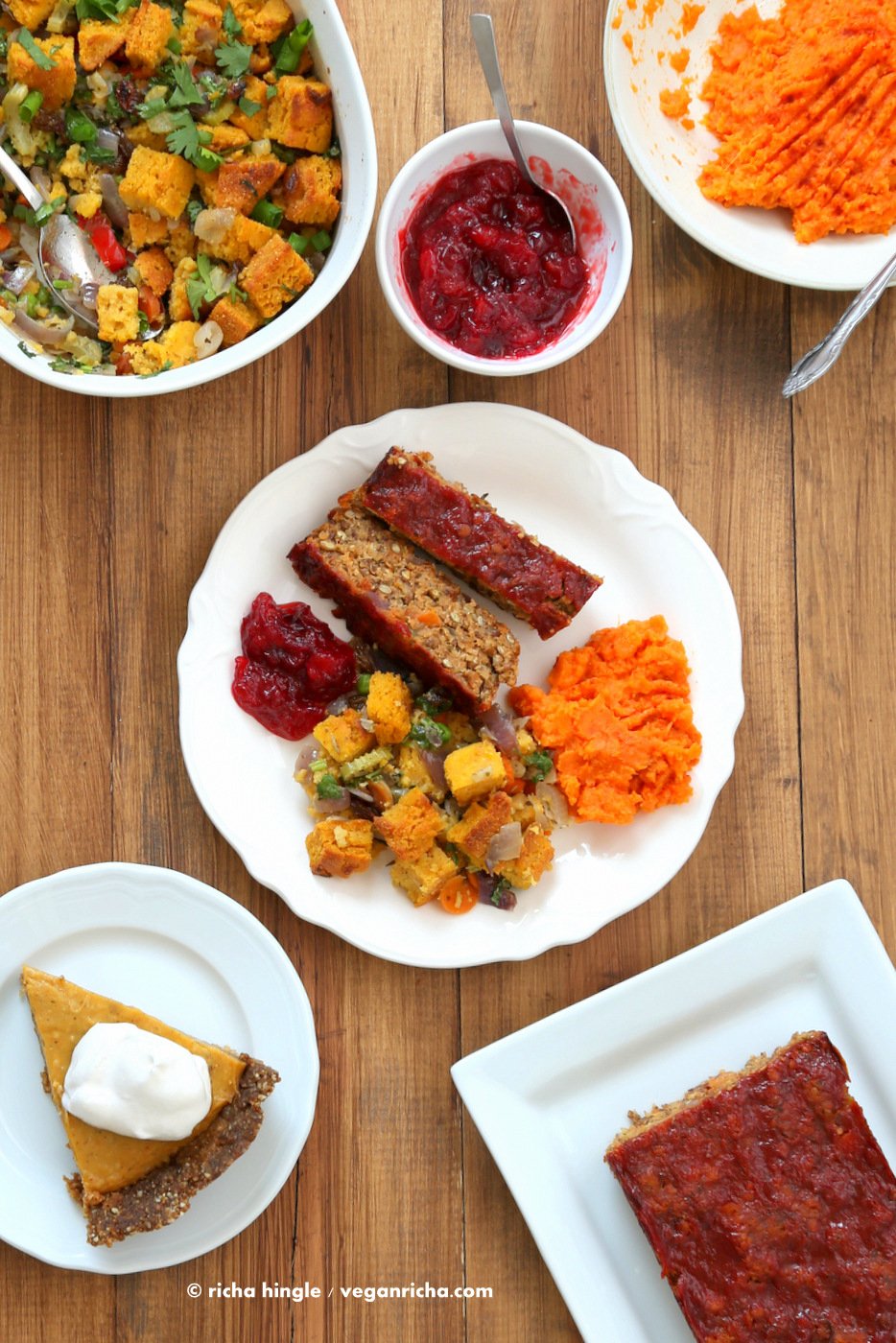 On this post The awesome people at Blendtec are giving away a brand new Blendtec 625 Blender + a Twister Jar!! The awesomest high speed blender that blends up those sauces and smoothies in a minute! I have been using mine every day! And the twister jar which makes the nut butters super easy. 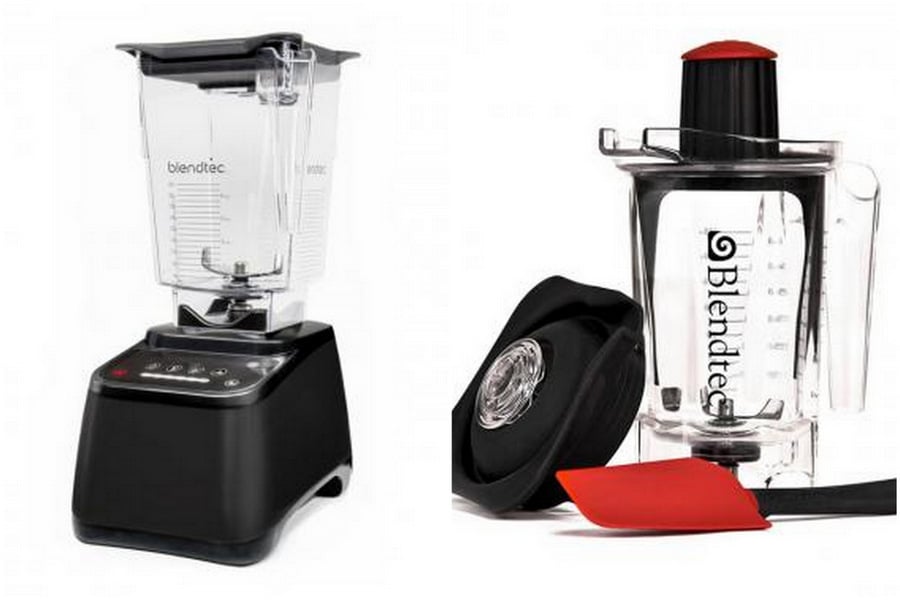 Enter the Giveaway below (US only)
Giveaway over.