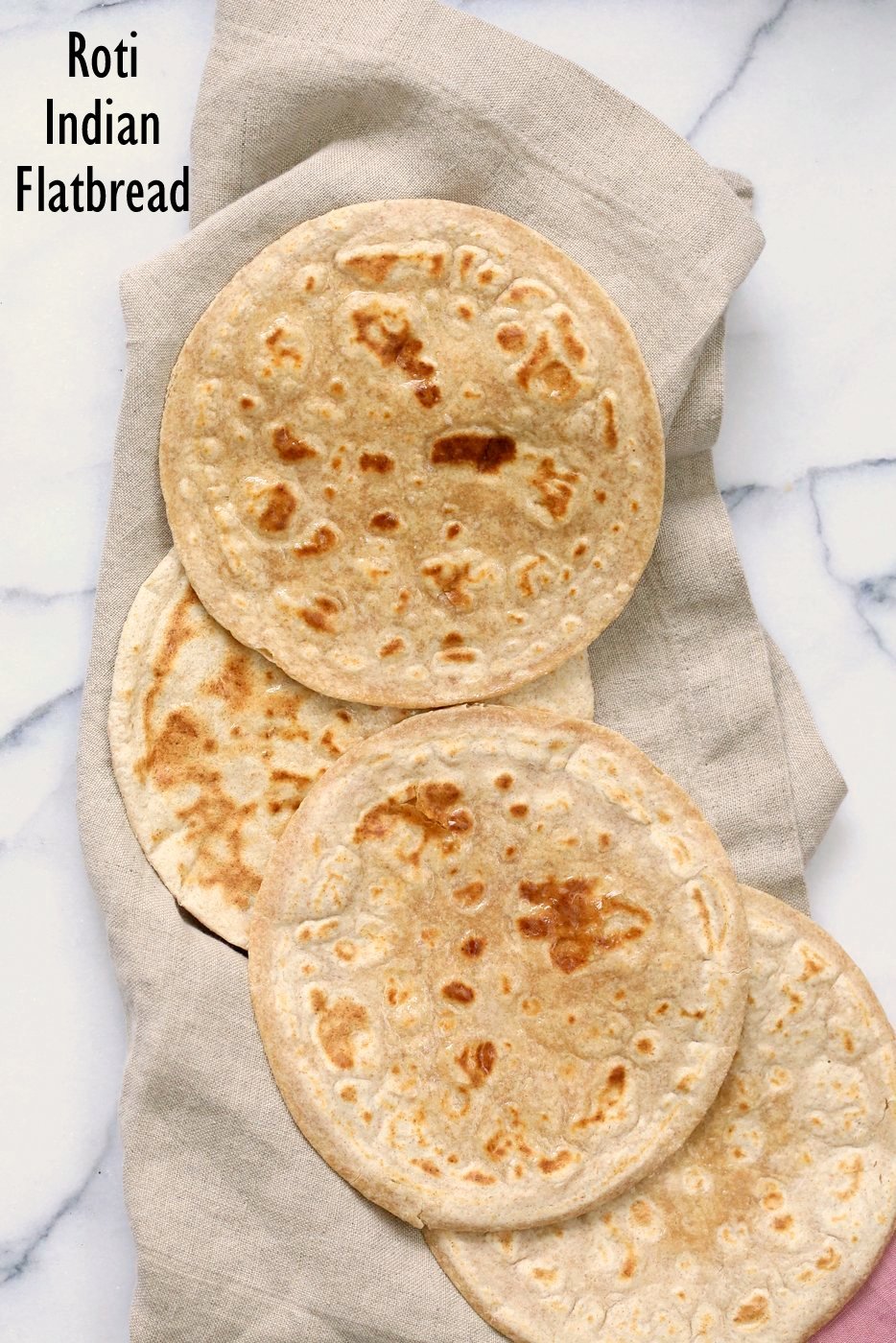 Rotis are an important part of an Indian home cooked meal in many regions in India. Freshly made flatbread served with the dals, veggie sides, and curries. Rotis are the carrier of all the amazing food. Rotis, also called Chapati, phulka, rotli, vary in terms of thickness and some additions to the dough. In general, the flatbreads served are made of whole wheat dough (called atta), they are rolled out into thin flatbreads that are cooked on a hot griddle or tava and puffed either on the tava or on the flame. Often the rotis will puff up fully to make a balloon filled with hot air.

Indian Restaurants here (in the US) rarely offer the traditional Rotis. The flatbreads generally offered are Naans, parathas and tandoori Roti which is somewhat like Naan. The thin light fluffy traditional Rotis or chapatis can sometimes be found in a few restaurants that offer home style food.

Back home in India, Mom has her Roti making oiled out and scheduled perfectly so there were always fresh rotis during meals. She also had helpers to roll them out, cook and serve on occasion. In my house here, we generally end up eating premade rotis from the Indian store. The whole process of making a smooth dough, rolling the dough out and standing for the half hour to make them on a hot tava used to be just about achievable on some days before I had balance issues, and then it just wasn’t possible.

Rotimatic is a robot that kneads, rolls out, cooks and serves fresh rotis, Its a neat white box where you fill up the flour, water and oil containers and press a few buttons. A few minutes later, you get hot roti flatbreads!

And it obviously became a sensation when the prototype rolled out a few years back. Everyone wanted this machine to reduce the hours and effort spent everyday to make rotis. See the end of the post to find out how to order one. 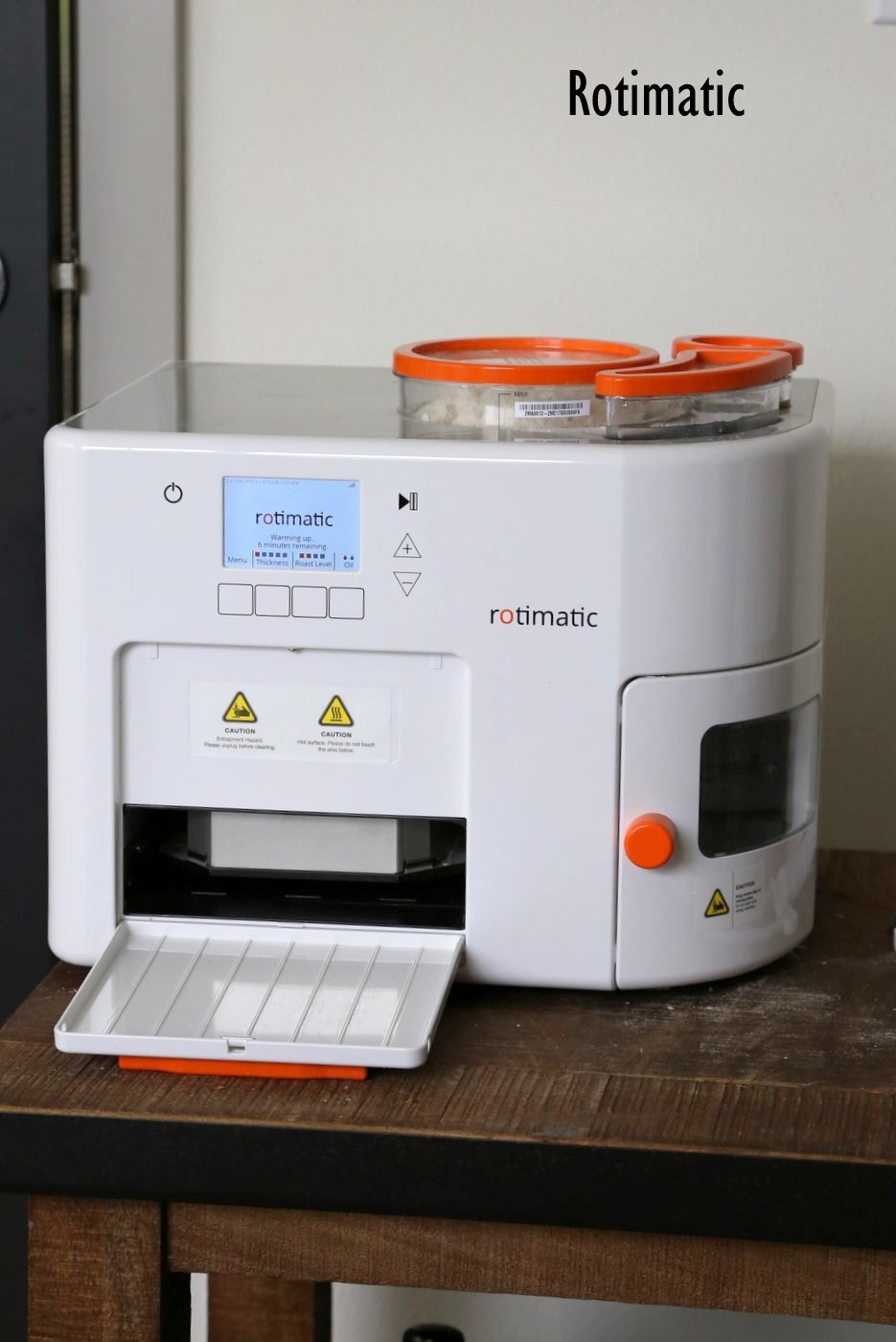 The Rotimatic is preprogrammed to work best with certain brands of flour which is typically used to make rotis in India (Indian atta or durum wheat flour). These are available in Indian stores.  I tried 2 of the preferred brands and they worked ok. The rotis were soft and perfect when hot but ended up being overly chewy after cooling. So I started mixing other whole wheat or whole grain flours in, that are not the specific brand flours. The machine worked pretty well with most of the combinations. The favorite combination for me in terms of flavor, texture and maintaining the texture after cooling was the a mix of Indian atta, some general whole wheat flour, some Spelt and some oat flour (roughly 2:2:1:1).

You can also use other flour combinations to make tortilla like flatbread or other flatbreads. I have mixed in millet, corn, oat, chickpea flours into the wheat flour as well.

I’ve been using the Rotimatic Rotis with most Indian meals, so they show up on some of the recent posts. Below is Butter Tofu Masala. 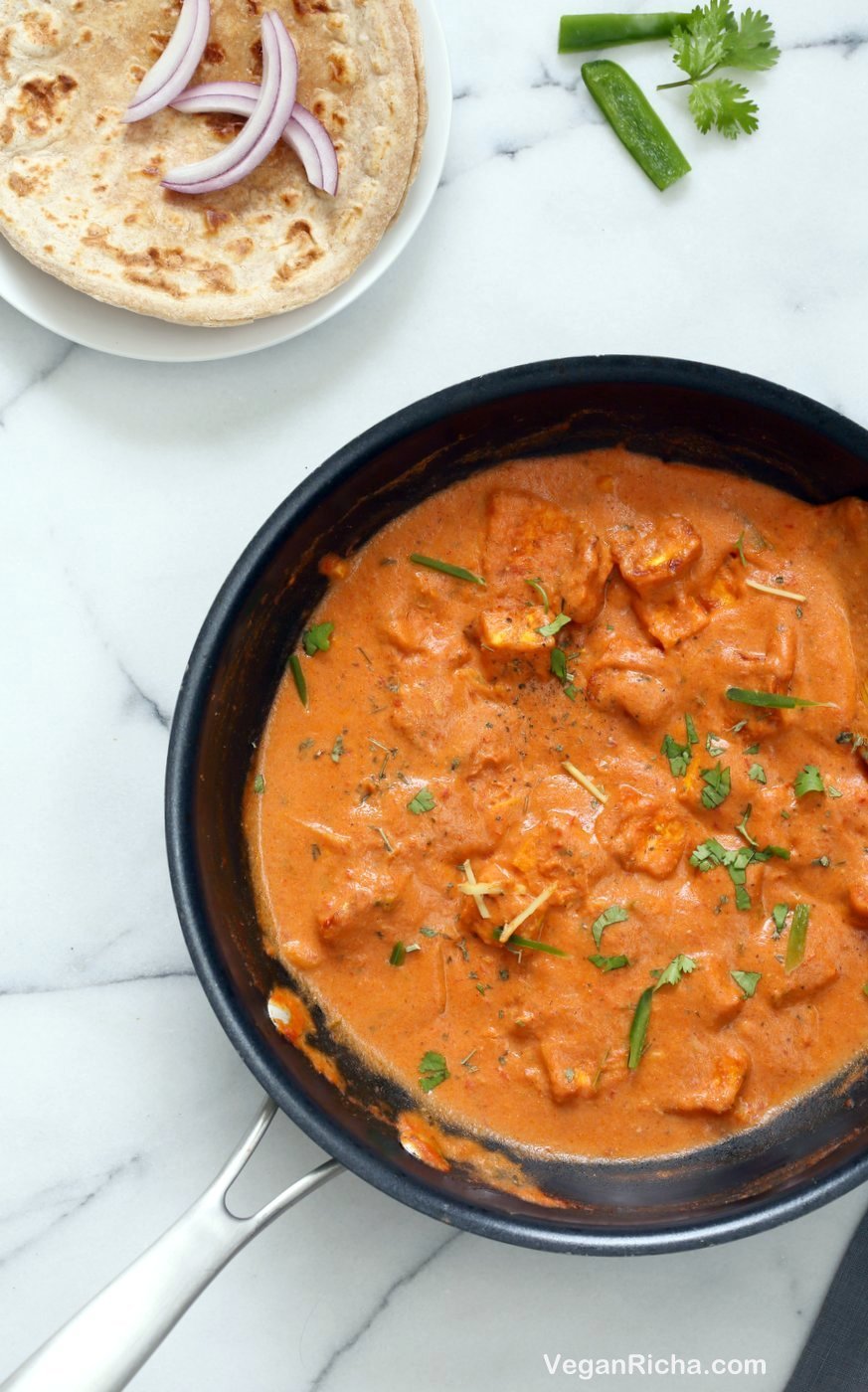 The other amazing part about Rotimatic is that the machine is wi-fi enabled and connects to an app on the phone! This means that it can get updated settings to work with other flours, or settings to add interrupts to the current continuous cycle of making the dough, flattening it and cooking it, so that you can get just the formed dough, or just the flattened flatbread. You can also use the app for live support, troubleshooting and other things.

A lot of thought has gone into this machine and it is fascinating to see it work. The way each dough ball for a flatbread is made, then flattened out and cooked to puff up perfectly is mesmerizing.

The founders (Pranoti, the inventor and co-founder, Rishi – co founder) have worked fore more than 8 years on it to bring it to what it is today. The machine uses sensors and devices to figure out the amount of water needed for the flour to make perfect roti dough. It adapts and learns from failed rotis, updates and information from the app/net. So if you use different flours, it learns!

I do very few sponsored posts on the blog and only mention the brands if I love them. This machine has been on my radar for a while and since we have had it, it has been used and tested in many ways and has passed with flying colors with my Mom, who is visiting from India, my young nieces who are picky and just about everyone else. 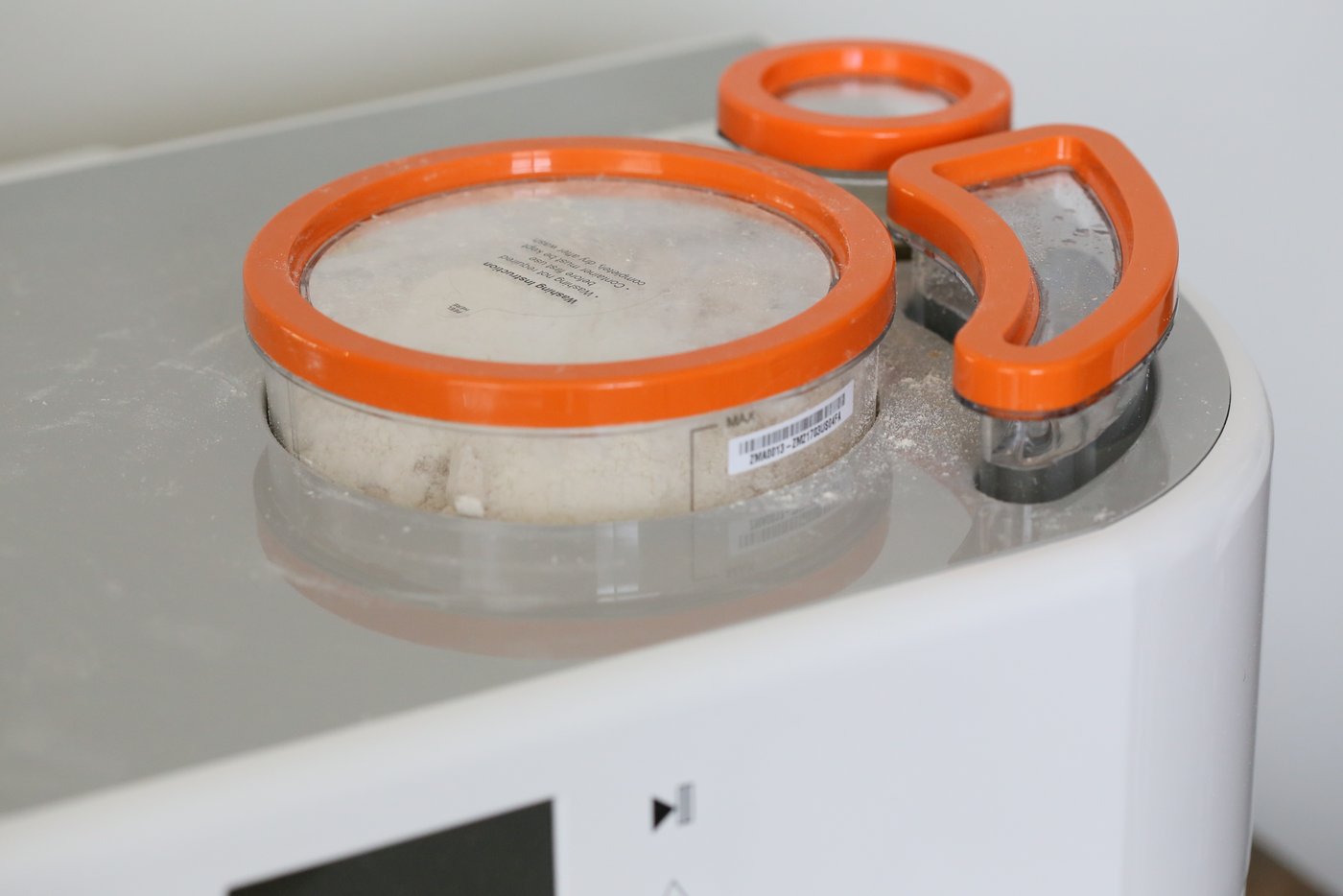 It seems like a bit of extra work when using it for just 1 or 2 people, but this machine has been the perfect help to have the past 10 days when I have been hosting my mom and family. Lots of Indian food gets made everyday and no one needs to stand in the kitchen to roll out the dough and cook it on the skillet for fresh rotis. With toddlers(visiting nieces), the meal times generally extend to hours and the Rotimatic works out really well as you can keep it on stand by and press start to continue making rotis when you have time to sit and eat.

New features get updated to the machine through wifi. For eg, a new upcoming feature called ‘Pooris’ will give you ready to fry poori discs. This is how it will work. New flour options will be added as well.

You can choose the thickness and roast levels of the flatbreads – below. 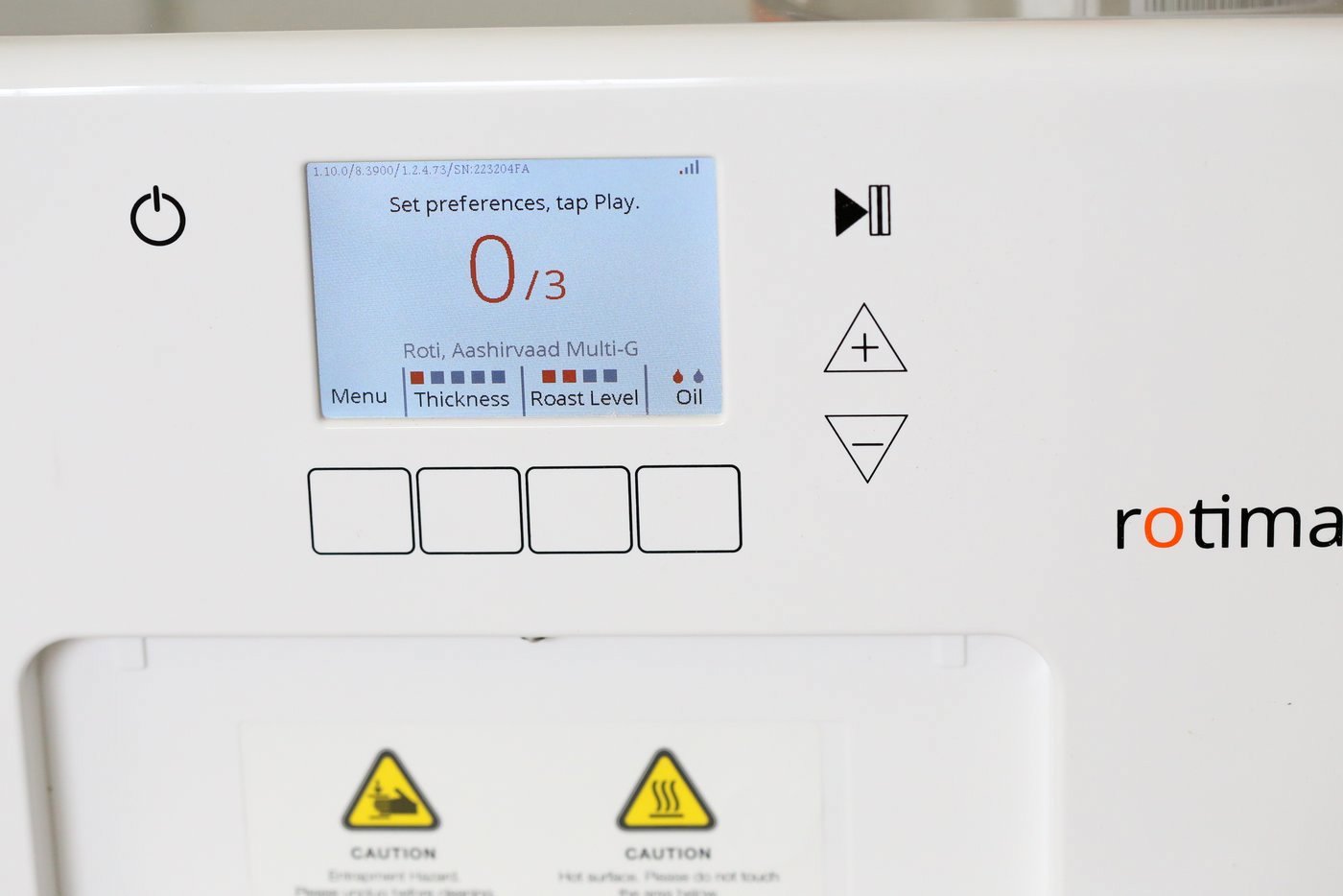 The 2 major Cons of the machine is the noise it makes and the price. It is a very noisy machine that you cannot place close to the dining table. The noise level is a bit more than a stand mixer with some other types of noises thrown in. I put the machine in a closed room near the kitchen which works just about ok and bearable when the door is closed for the 15 mins of noise. If I were to use the machine to make 30+ rotis regularly, I would have to put it in the garage. (this depends on your noise level limit.)

The other deterrent is the pricing. The machine costs itself out in 1 to 2 years depending on your Roti consumption if you often buy premade rotis. The easy of use, and the time you get back to use for other things to do also balances the price.

Some other issues that might be bothersome are that either the water or flour runs out after 10 to 12 rotis and needs to be refilled. The minimum thickness of the Rotis is a bit thicker than the average hand rolled rotis.

The Rotis being puffed up below. 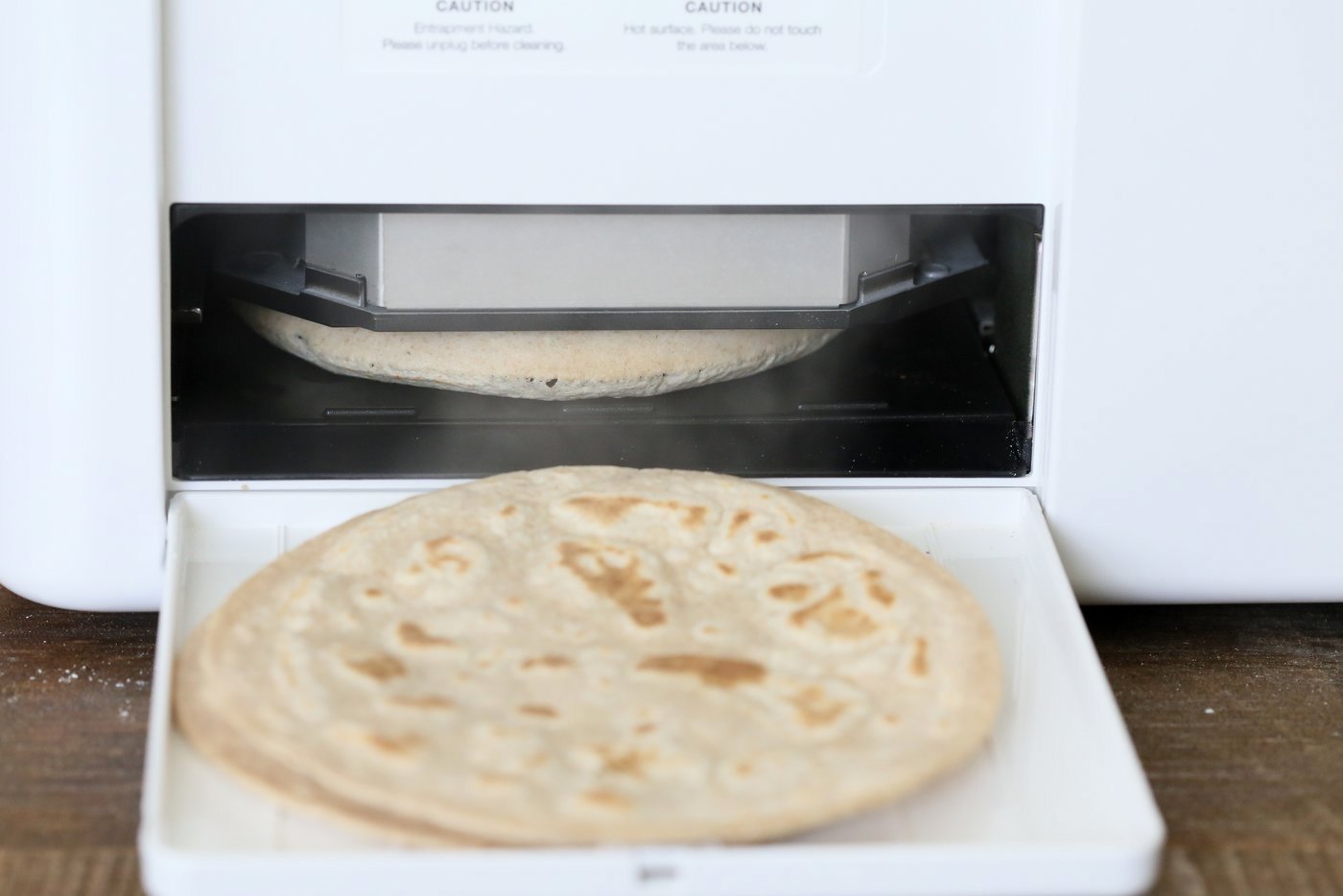 Cons: It is an incredibly noisy machine. It is bulky, has limited options for flours (which will eventually be fixed with the new features of using other flours).

The rotis also dont exactly taste like the hand rolled skillet cooked version, but the company doesnt claim them to be.

In spite of the cons, I have been using it since it arrived and have not bought the premade rotis from the Indian store. There is something about hot and fresh rotis that makes the food so much more interesting. 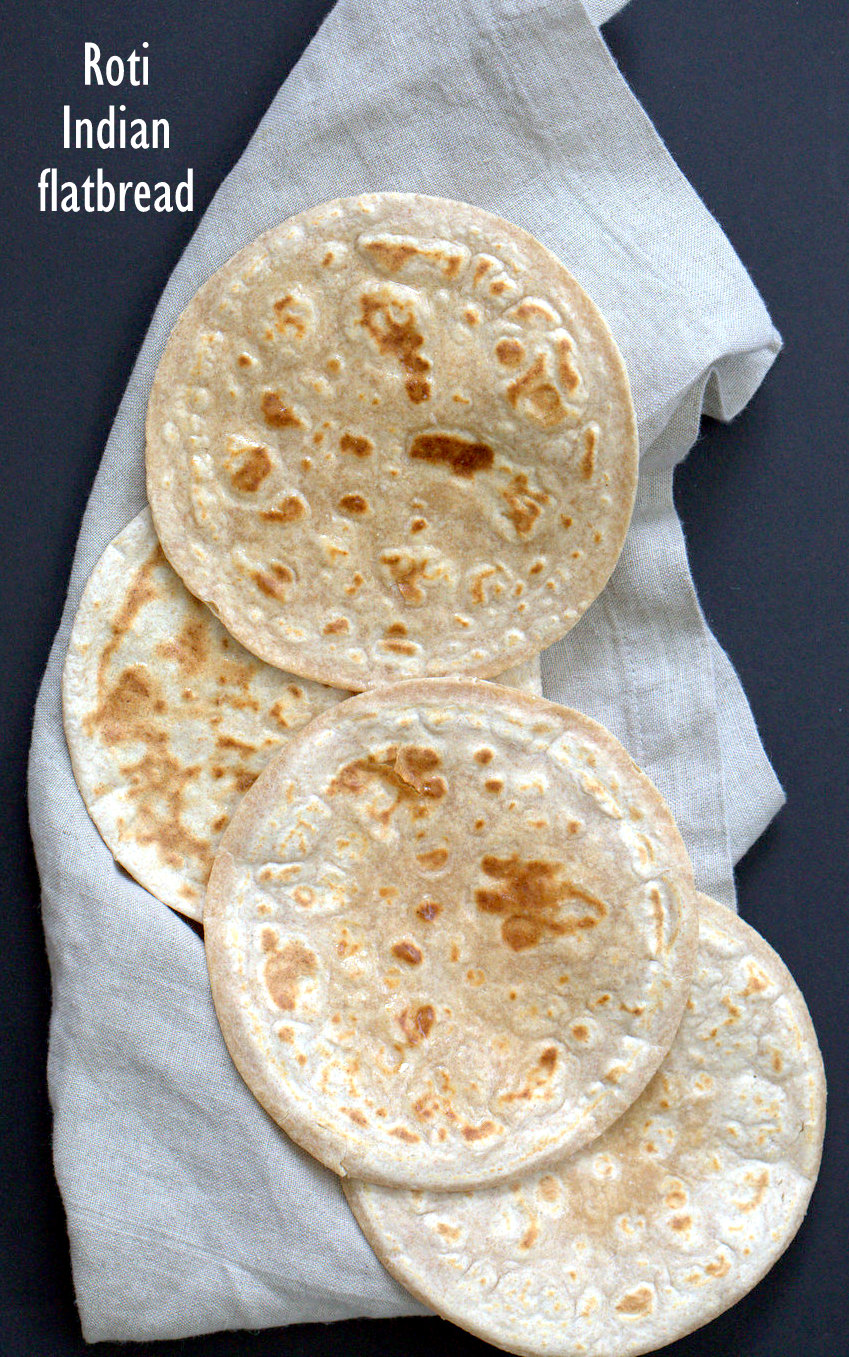 If you or your family makes rotis or tortillas from scratch often, want to be sure about the ingredients that go into the flatbreads, and would like to reduce the effort and time needed there, then this is the machine for you.

Rotimatic is not directly available to order from the US. They have a wait list which gets fulfilled in a few months. You can skip that line using this link here and get to the top of the waiting list. Once you sign up, you will get a order link to order yours. For other countries, see their website.

Disclaimer: This post is sponsored by Rotimatic. The unit was sent to me for Review. The opinions are my own after using it for more than a month.