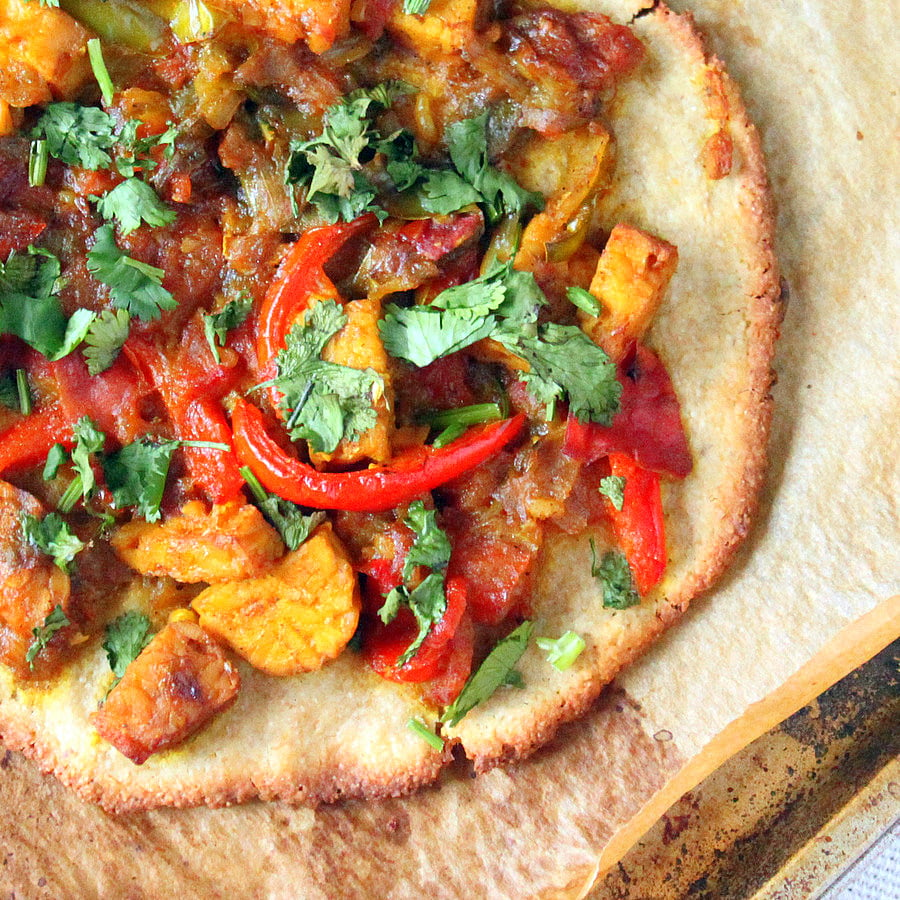 Its not that warm here for outdoor grilling parties yet. So I have been whipping up a Pizza or 2 every now and then. Using wheat bases for some and trying out gf bases for some. The ones on this post are all glutenfree. Some were made a few weeks back and some recently. I thought I will put up a post with the pictures that I had.

The pizza bases in the pictures uses the White Oat loaf or Focaccia dough(both are almost similar doughs). It can also be replaced with my rustic wheat pizza base or the Everyday sandwich loaf dough. for a with gluten version. 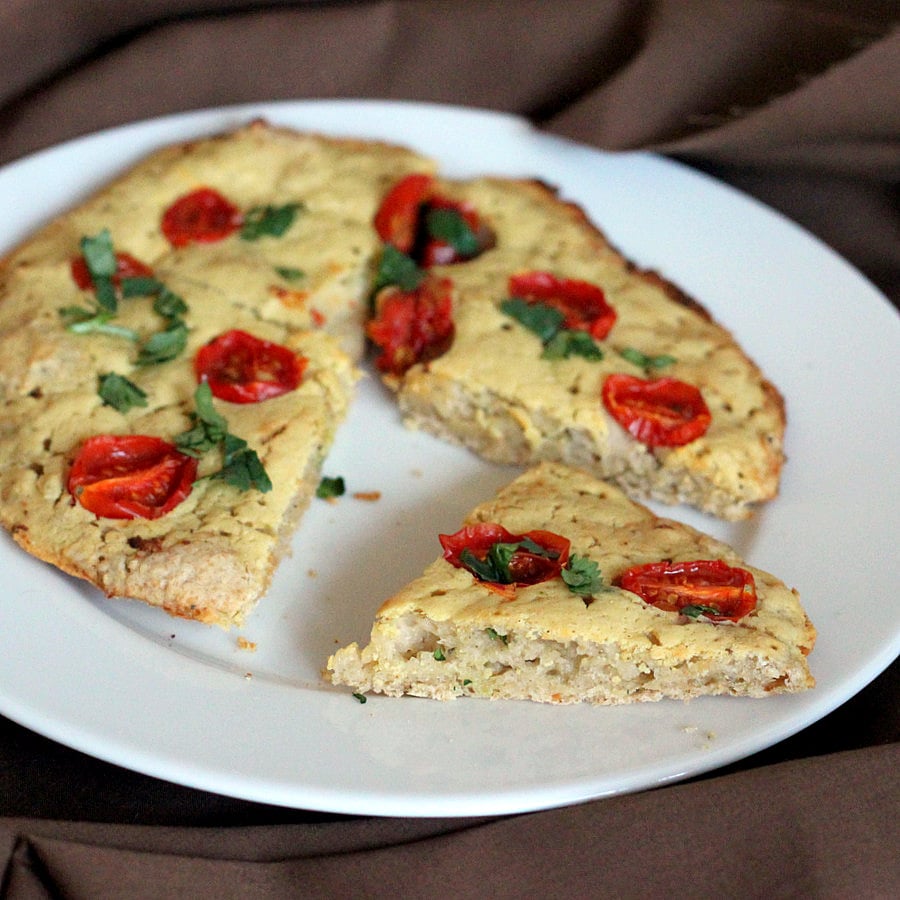 GF yeast doughs do not necessarily need 2 rises. But when using oats, the dough is much more predictable after the first rise. Oats absorb a lot of the liquid content and you can adjust the dough if it is too dry or too watery after the first rise. If less water was used, then the dough before the first rise will look like it is wet, but on baking will give you a dryer and more crumbly result. See White Oat loaf for the recipe and details.
One of the toppings not pictured, that gets quickly put together, is a delicious garden veggie thin crust with my rustic wheat crust or a gf crust, made to about a few mm thick, brushed with olive oil and loaded with some of our balcony garden veggies, like Spinach and basil, then loaded with sliced large tomatoes, onions and some chili flakes, salt and cajun spice. Baked for 12-14 minutes and eaten within 2!
Yes, I do overuse my parchment. those sheets can last you forever if they dont tear.;) 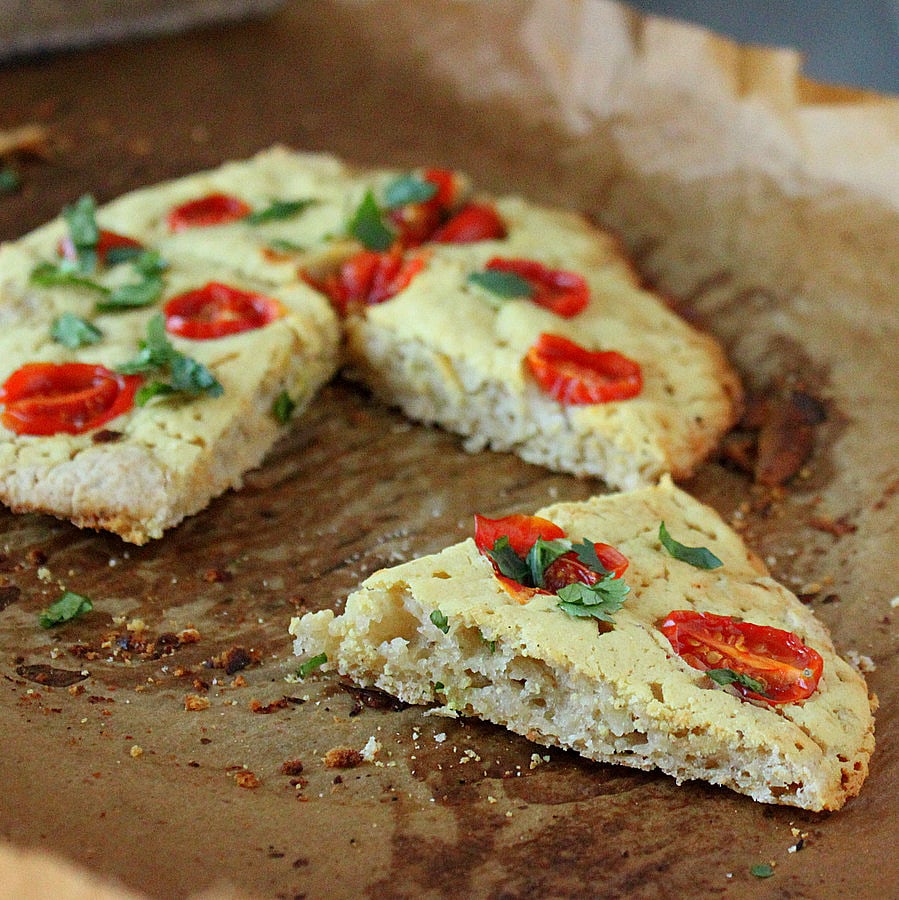 This one below was a gf White Oat crust. the dough recipe will yield 2 8 inch thin crusts. The dough patted thin after the first rise, and loaded with Kadhai Tempeh(Tempeh and bell peppers in tangy tomato gravy), 1 Tablespoon grated ginger, then baked in preheated 400 degrees F for 12-15 minutes. Then topped with fresh cilantro before serving. 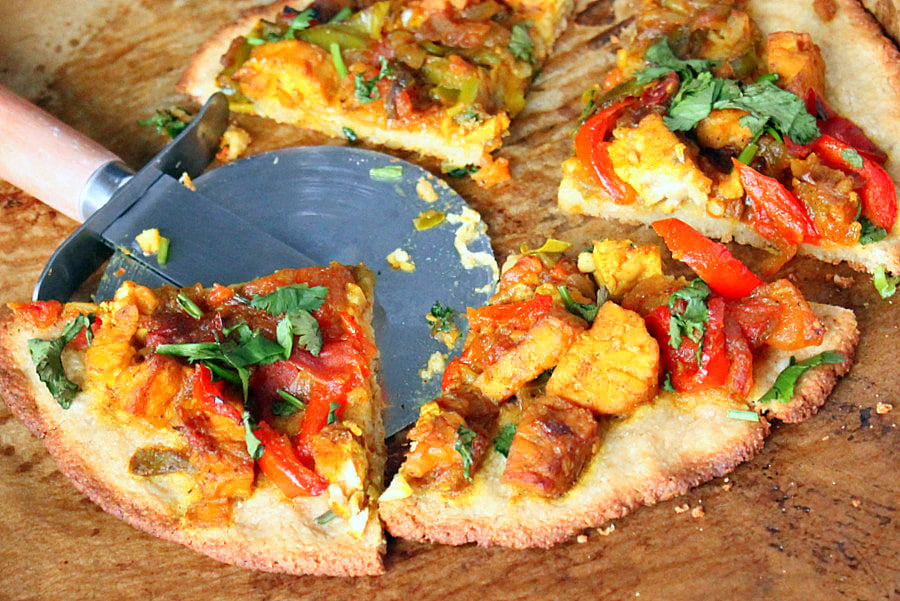 You can top it with veggies or any other thick curry too.
The one below is the gf Focaccia dough. The dough will yield about 1 fat 10 inch base. After the first rise, the sticky dough is patted onto parchment with oiled hands and then topped with the red Lentil hummus, grape tomatoes and basil/cilantro. Let the dough rise with the toppings for 10 minutes before baking it in a preheated 400 degrees F for 12-15 minutes. To reduce the browning on the edges, spray some water only on the edges before baking.
Top with nutritional yeast, chili flakes, fresh herbs of choice before serving. 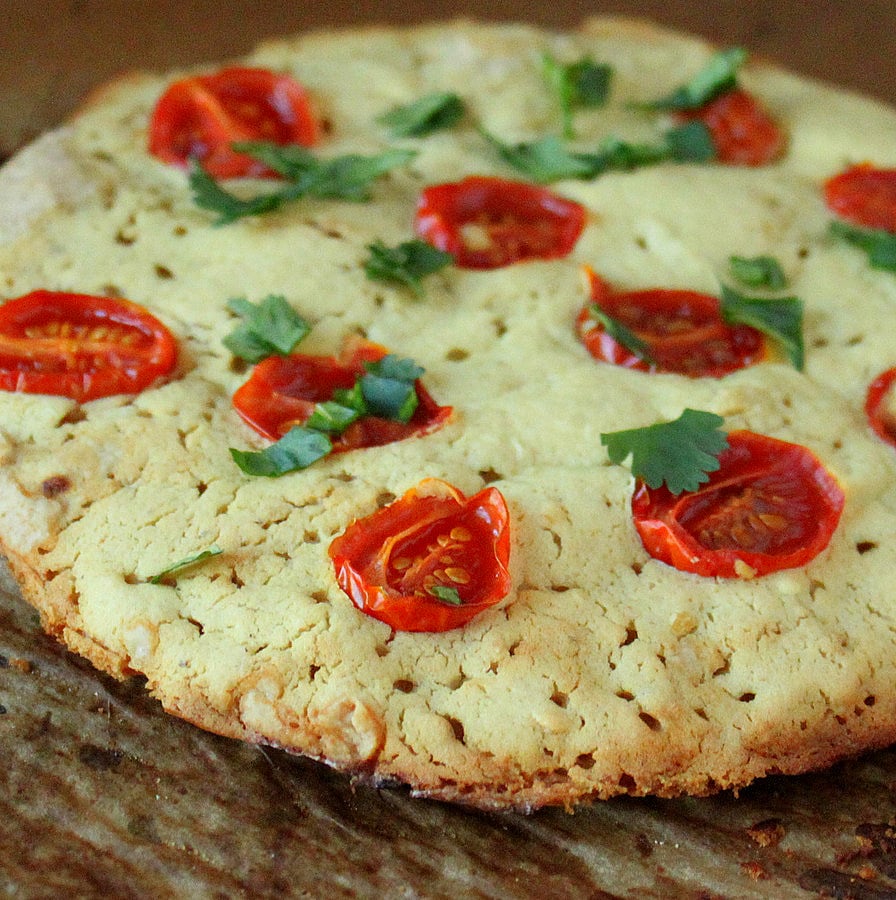 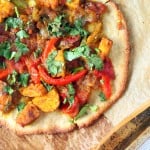 Nutritional values are based on one serving 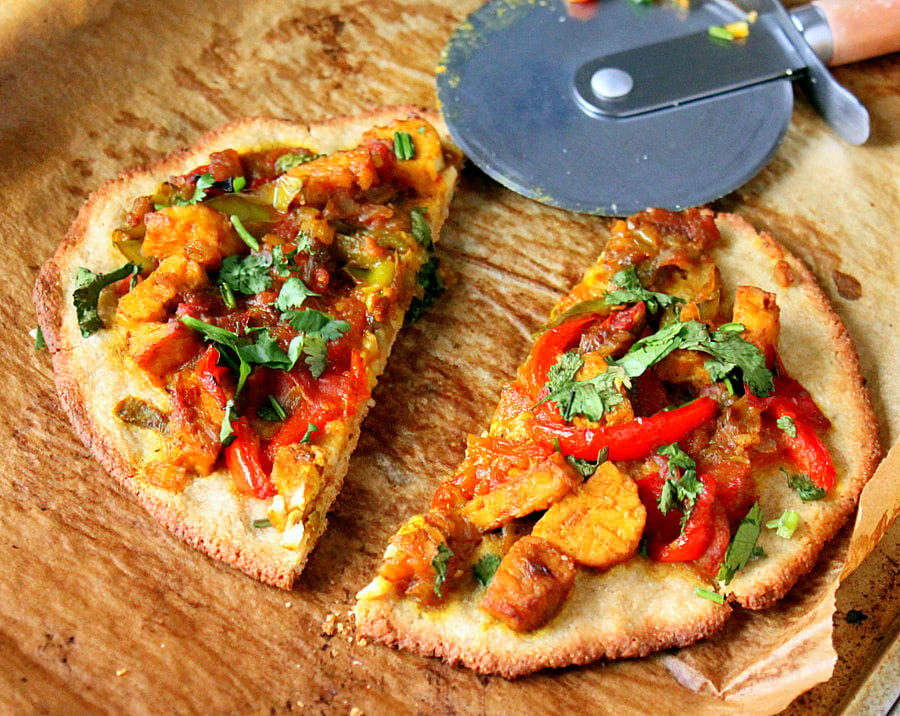 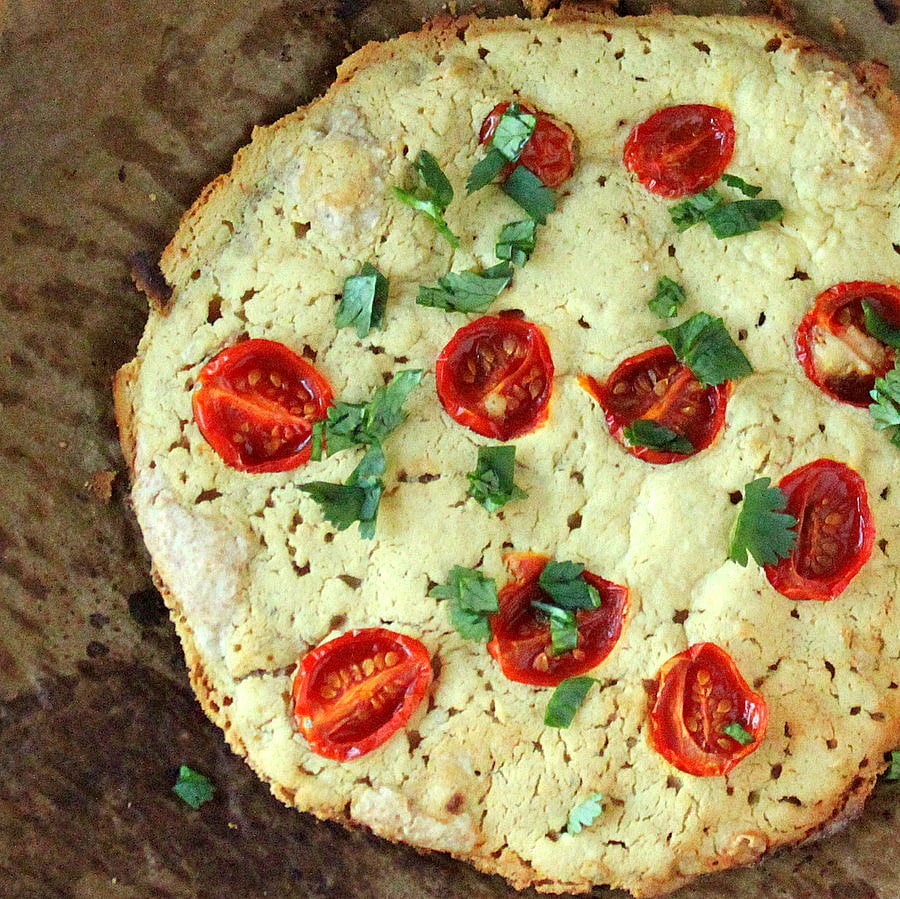 Ever wonder Why is Coca-Cola often more affordable than clean water? Why are candy bars and cigarettes often more readily available than fresh fruits and vegetables? Why are Twinkies cheaper than carrots! Read John Robbins post on HuffPo here
In just the last two years, 24 states have considered legislation that would place a tax on soft drinks. These “soda taxes” would discourage consumption of drinks high in sugar, thus reducing obesity and health care costs. And they would also raise money that could be used to subsidize healthier foods. But in every single state, the legislation has been defeated. PepsiCo Inc., the Coca-Cola Company, and the American Beverage Association have spent hundreds of millions of dollars to determine the outcome. 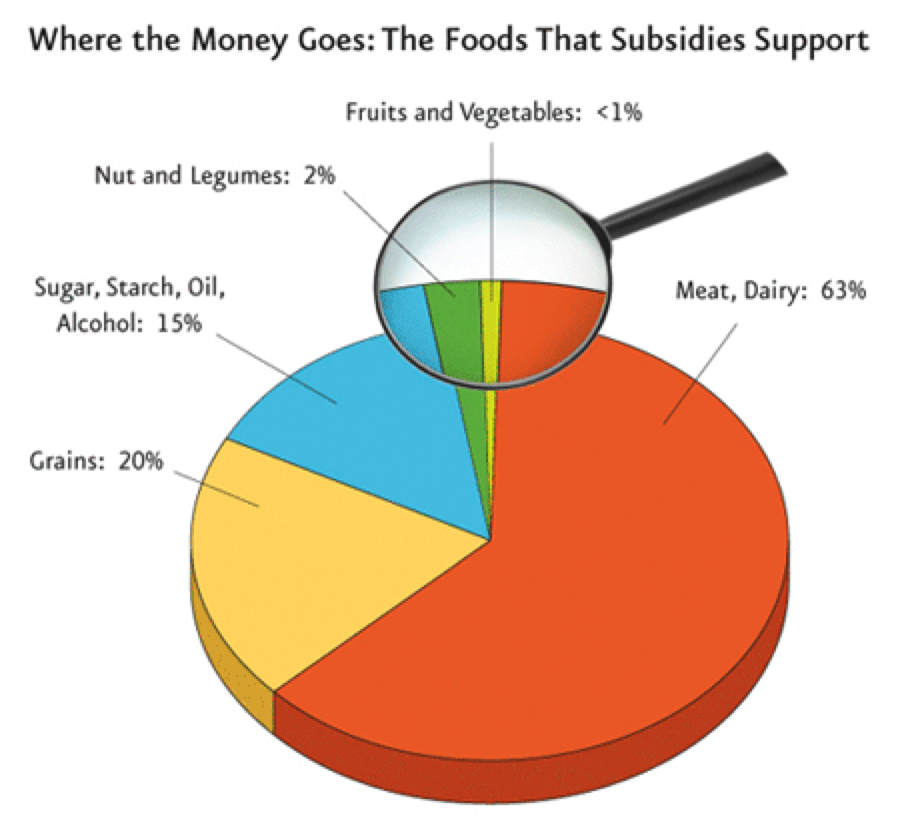 A few more key points from the article-

For example, funding for research in organic farming would be cut to almost nothing, while corn growers, who have received $73.8 billion in subsidies in the last 15 years, would get even more now. Subsidized GMO corn is used to produce cheap high-fructose corn syrup, a substance that even Vice President Joe Biden says is more likely to kill an American than terrorism.

This heavily subsidized genetically modified corn is also fed to livestock in factory farms and feedlots — at unfairly reduced prices.

These subsidies aren’t just costing U.S. taxpayers and enriching big agribusiness. They are also having a devastating impact on the health of millions of people.