There are several types of indian flat breads.. some leavened like Naan, some unleavened like Roti/Chapati or stuffed unleavened like Parathas. The flatbreads that are served with everyday Indian food at home are generally simple Roti and Parathas. There are very few days when I make Naan at home, usually special occasions. Naan is a soft bread that uses yeast to leaven and generally contains yogurt, butter and other additions as eggs depending on the restaurant and the recipes. This vegan naan uses non dairy yogurt to make an amazing vegan version. It is soft, fluffy and a perfect carrier for all curries and spicy dishes. Naans can be baked or made on a skillet (tawa) on the stove. See all options in the recipe.
You can make your own vegan yogurt, or get plain non dairy versions from the store. Yogurt is one of the main reasons the Naan stays soft and the reason for the authentic texture. Additional fat/oil can also help keep it soft, but the texture will be slightly different. I also often use mashed avocado(make sure to use very ripe mashed avocado), to sub the yogurt. The texture is slightly different and obviously the color. But it makes for a sturdy, soft and fluffy flatbread. Make this Vegan Naan and let me know in the comments how they turned out!
Below is Avocado Naan with Tempeh Tikka Masala. These Naan recipes and 2 more Naan recipes that are gluten-free are in my Cookbook! which is Available Internationally. I also have 2 Gluten-free Naan Recipes in my book. 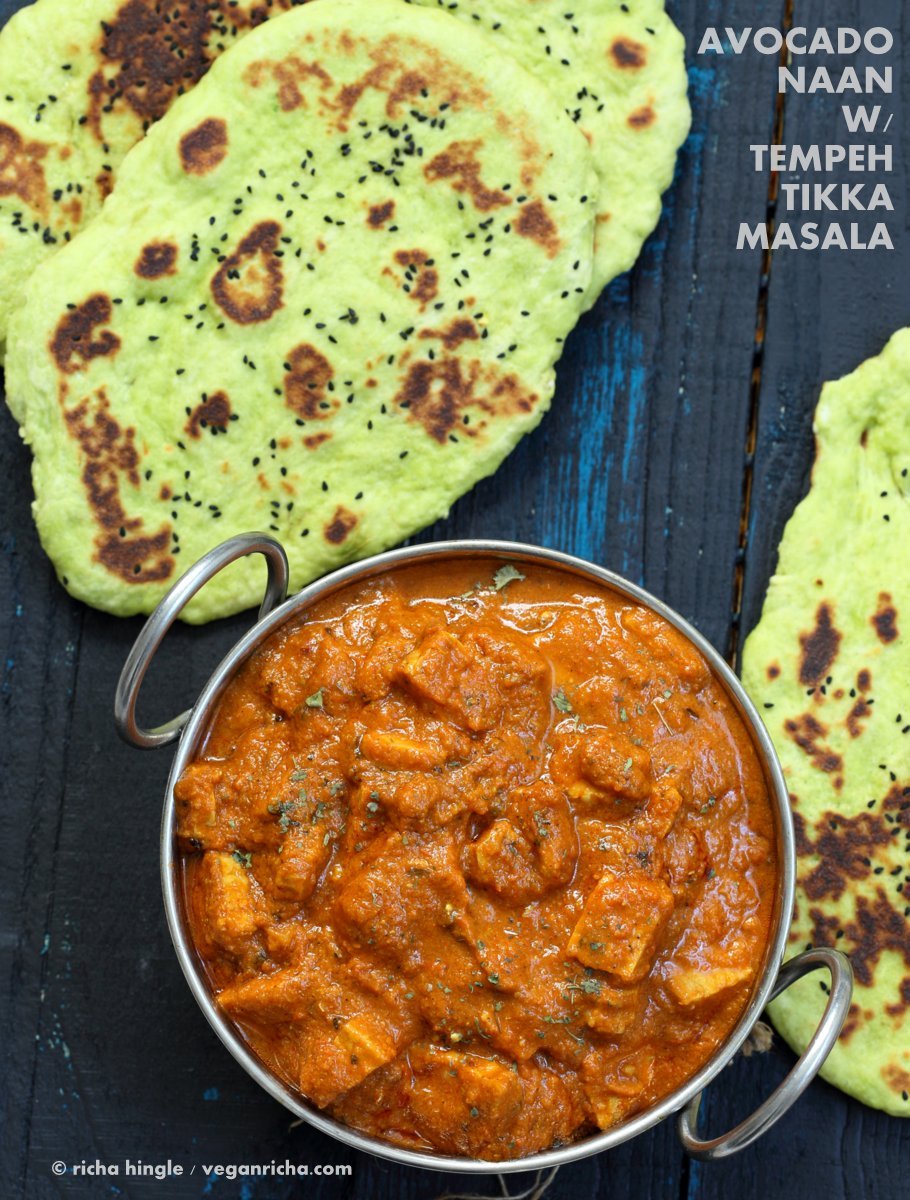 Serve the Naan breads with Curries and Dals. See video above the Recipe widget. Let me know in the comments how it turned out and also rate the recipe!

Yogurt Sub: If you cannot use Vegan yogurt, subs like coconut cream, cashew cream, silken tofu, mashed ripe avocado, softened or thinned out vegan sour cream will work. Start with less flour and add more as needed to make a soft and slightly sticky dough. Proceed with the rest of the recipe.
If you plan to use thin non dairy milk (you can use it since naan is a bread after all), let the dough rest for longer for the first rise (overnight the fridge, then on the counter for an hour to come to room temp, then make flatbreads), for that additional moisture and flavor.  Eventually you can make the flatbread with just flour yeast, salt, water and oil, Or just flour, yogurt, water, oil and salt (no yeast). The recipe on this post is one of the common traditional versions for the soft, chewy, moist texture and flavor.
Oil-free: You can make these oil free, use more yogurt to sub the oil and keep the dough sticky/more on the wet side. Once cooked, immediately store them under a heavy towel to retain moisture as they will tend to dry out without the oil.
To store the Naans, store the dough or naan as you would Pizza dough or rolled out Pizza. After the first rise, divide the dough into individual balls, coat in oil and freeze in sealed ziplock. To use, let it thaw for an hour at room temp, roll out and make Naan breads.
The dough can be rolled out and cooked partially and frozen as well. To reheat, brush with some oil or vegan butter and reheat on a skillet to char.
Pictured below. Naan Stuffed with grated cauliflower 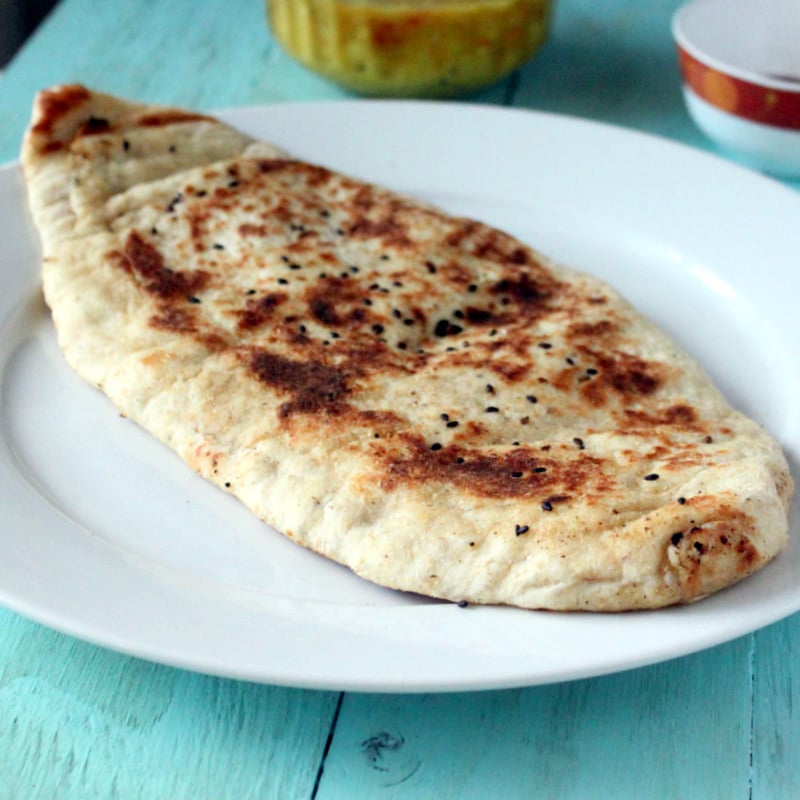 For a Glutenfree version See here or check the 2 versions in my book.
Cooking time and appearance depends on the oven and pan used. You will have a better idea after making the first Naan in terms of how you like yours, cooked to a dark char spots or golden like a pita. You can also put the rolled out Naan bread on a grill. Grill one side, flip and cook the other side. Make a Naan Pizza by topping it with Indian Curries or Roasted Veggies and vegan cheese. 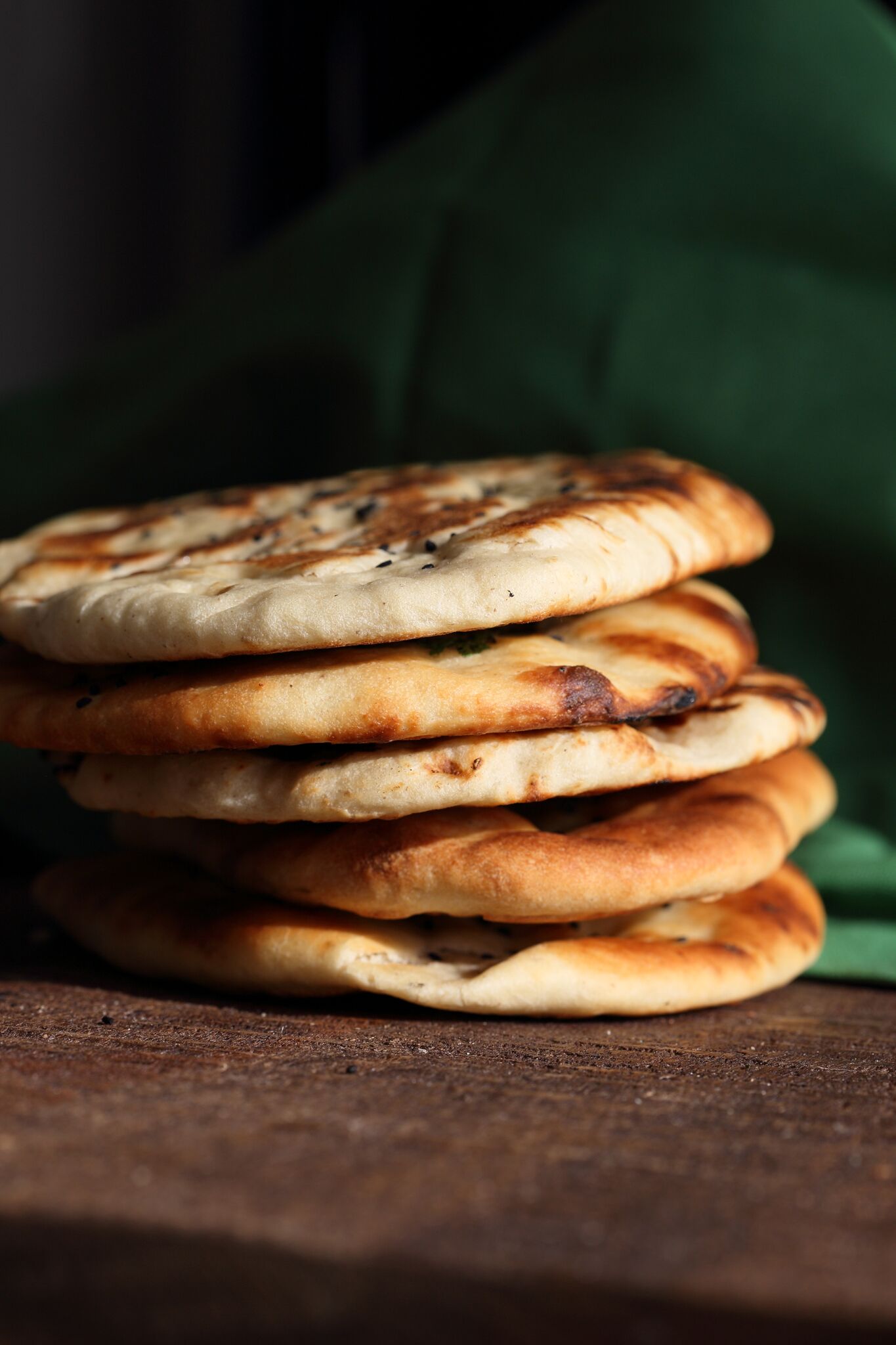 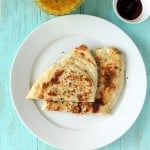 To Cook the Naan

Yogurt Subs:
Coconut cream, cashew cream, silken tofu, Mashed ripe avocado, softened or thinned out vegan sour cream will work. Start with less flour and add more as needed to make a soft and slightly sticky dough. Proceed with the rest of the recipe. For storing instructions, oilfree option, see the second paragraph of the post.

Nutrition Facts
Vegan Naan Recipe - Plain, Garlic or Avocado Naan bread. Dairy-free Indian flatbread
Amount Per Serving
Calories 276 Calories from Fat 63
% Daily Value*
Fat 7g11%
Sodium 427mg19%
Potassium 113mg3%
Carbohydrates 43g14%
Fiber 1g4%
Sugar 2g2%
Protein 7g14%
Vitamin C 2.5mg3%
Calcium 53mg5%
Iron 0.6mg3%
* Percent Daily Values are based on a 2000 calorie diet.
Old recipe on this post. See updated recipe above in the recipe widget.
Vegan Naan- Indian flat bread
Allergy Information: Dairy, egg, corn free recipe. Can be made soy and nut free.
You can make these with all bread flour or all Wheat flour. I usually dont put more than half whole wheat flour.
For 4-5 Naans
Ingredients:
2+ cups flour( I used 1.5 cups bread flour and 0.5 cups whole wheat flour)
1.5 teaspoon active dry yeast
1 teaspoon salt
2 teaspoons raw sugar
1/2 teaspoon baking powder
2 Tablespoons Oil (I use a combination of coconut and olive or organic canola)
3 tablespoons Soy yogurt or Cashew Yogurt Or Coconut milk yogurt,  Or 4 Tablespoons Mashed Avocado mixed with 1 teaspoon lemon juice.
3/4 cup lukewarm water
Seeds for topping: Nigella(Kalonji), black Sesame(til), Carom(Ajwain)
Directions:
Dissolve active dry yeast and sugar in 1/4 cup lukewarm water and let it sit for 10 minutes or until frothy.
Add salt and baking powder to 2 cups flour and mix well.
Add the oil and yogurt Or avocado and mix into the flour.
Add the water/yeast mixture and knead. Add a 1/4 cup water at a time to make into soft dough.
Knead for 5-6 minutes until smooth and non sticky. Place in greased container, spritz top with oil and let rise for 2 hours or until doubled.
Knead the dough for a minute, use a little flour to help reduce stickyness, and divide the dough into 5 equal parts.
Take each piece of dough, one at a time, and roll/shape into 8-inch oval shape. Dust lightly with flour to help with the rolling.
Cook:
Oven Method:
Heat the oven to 450 degrees F with pizza stone for at least half an hour.
Next turn the oven to high broil.
Before putting the Naan in oven, pat some sesame or nigella seeds on the top. Lightly spritz/spray the naan on both sides with water and place onto your baking/pizza stone into the oven.
Bake 2-3 minutes till it puffs and top gets golden.
Serve hot, topped with vegan butter or olive oil.
Stove top:
Use any large pan/skillet which can withstand high heat. Heat it on medium high heat until hot.
Pat some nigella, sesame or carom seeds on top and spritz the bottom with a little water.
Place the naan with bottom on the pan.
Cover and let cook on medium high till it starts to puff.
Flip after 1-1.5 minutes, and cook for half a minute( for pita style)
If you like a charred Naan, then instead of flipping to cook the other side, hold the uncooked side of Naan over the flame with tongs for a few seconds to cook and char some spots.
Serve hot, topped with vegan butter or olive oil with any Indian curry, Daal lentils, vegetables, salad and pickle.
For garlic Naan:
Press finely chopped garlic and cilantro on the top along with the seeds of choice and roll the rolling pin over it, so everything gets embedded in the dough and then proceed with the cooking step as above.
Liked this recipe? Get this and 2 more Naan (gluten-free) recipes in my Cookbook! Now Available Internationally!
Pictured below- inside of the Stuffed Naan. 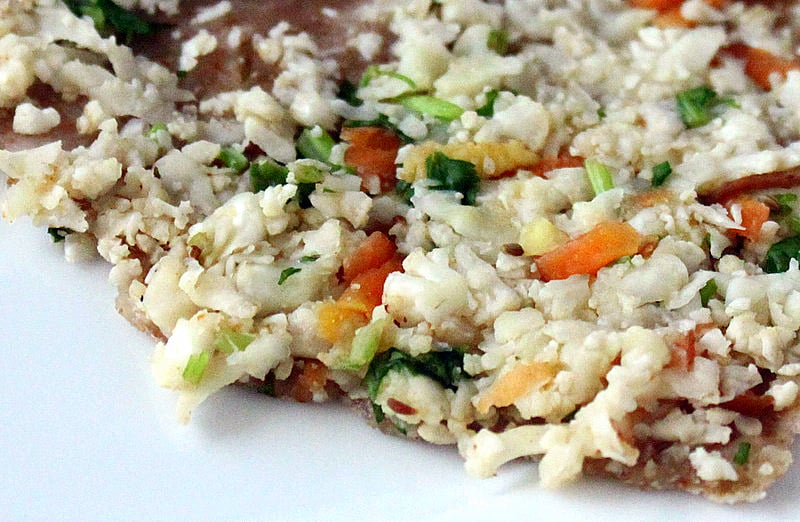 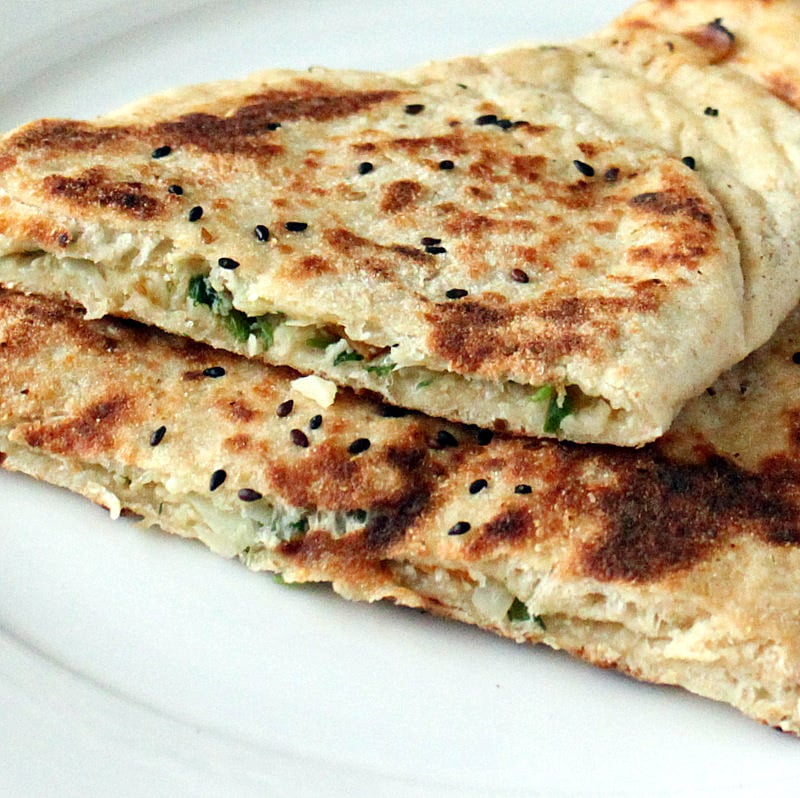 Stuffed Naan:
Stuffing( can be any stuffing you use in Parathas.. some grated veggies, herbs and spices)!
Pictured stuffing
1.5-2 cups Grated cauliflower
1 green chili chopped
1 teaspoon ginger grated
1/4 cup cilantro chopped
1/2 teaspoon salt
1/4 teaspoon black salt(kala namak)
1/2 teaspoon carom seeds(ajwain)
1/2 teaspoon cumin powder
Add 1/2 cup finely chopped greens like spinach, Kale, Chard to amp up the nutrition.
Mix everything and use. If the stuffing feels too damp, you can dry roast it for 2 minutes or microwave for a minute so the veggies absorb the moisture. The moisture is not a problem in Naans, but creates rolling problems when used for parathas(unleavened flat bread), because the dough is rolled quite thin.
Other stuffing ideas: mashed boiled potatoes, grated broccoli, zucchini, potato mixed with Beet, potato and Kale/spinach, grated radish, squash and lots more.
For Stuffed Naan:
Roll out the dough into a circle and place the stuffing like a calzone on one side, half inch away from the edge.
Apply a little water on the edge, Fold the other side and seal. press edges well.
Roll out this semicircle a little to form an oval and also distribute the stuffing.
Proceed to cook like regular Naan above.