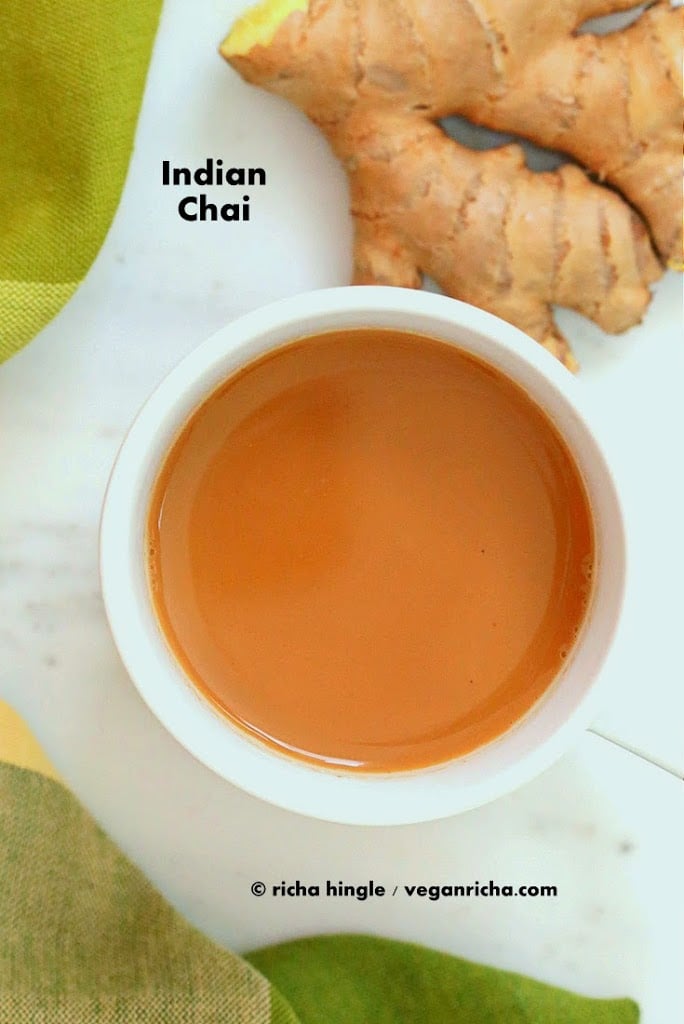 Masala Chai was the last of the non-vegan foods to be eliminated from our diet. Hubbs and me both grew up  guzzling cups of chai every morning with breakfast. It would be mostly milk and lightly flavored with tea till we hit the teens, then it was small cups every now then with friends, every time we visited anyone, at evening hang outs, in the wee hours of the morning during exams, and on and on. Dad still has a cup every 2-3 hours at work. No wonder we were so stuck to it, or more stuck to the dairy in it. The thick creamy concoction made with dairy milk, boiled for minutes and minutes, had not only the addiction from milk and tea but also several memories associated with it.

I have an older post with a creamer that was the recipe we settled on in the initial transition year. And now after trying several other plant milk options, this is our current vegan chai. The recipe works well with other almond milks and soy milk too. The additives in some of the packaged plant milks though change the texture and consistency of the chai enough that it can go from great to unpalatable if not used correctly(over heated or not heated enough, or curdles at high heat). Some of the preference is also related to the fact that the Chai has to uphold to our strong taste and texture memories. For someone who is flexible with the taste, the recipe will work with a lot of other plant milks as well. We’ve also loved oatmilk and soymilk versions(some brands)

Why the hassle to find the home made or packaged plant milks that works best? Same reason we all look to find cheese alternatives or other things from our pre-gan days. With the preference for steeped in water teas growing in this house, soon we might not be drinking the morning chai at all. It is a great option to have for anyone visiting though. Mom and dad drink Chai 3 to 6 times in the day. Mom loves the easy access to almond breeze when she visits.
There is also the option to use cashew milk, packaged or home made. The thing with cashew milk is that the heat thickens up the cashew milk really quickly and the thick texture might feel too different or new.

For any milk you use, give it some time. Try it a couple of times instead of just once. It takes time to get used to the change.Keep trying different plant milks for the ones that work best for you.

Chai in Hindi literally means tea, so Chai tea is basically tea tea 🙂 This often happens with non Indian (other non english) terms too. Its a translation that is helpful hence Chai tea is much bigger search term than just Chai. 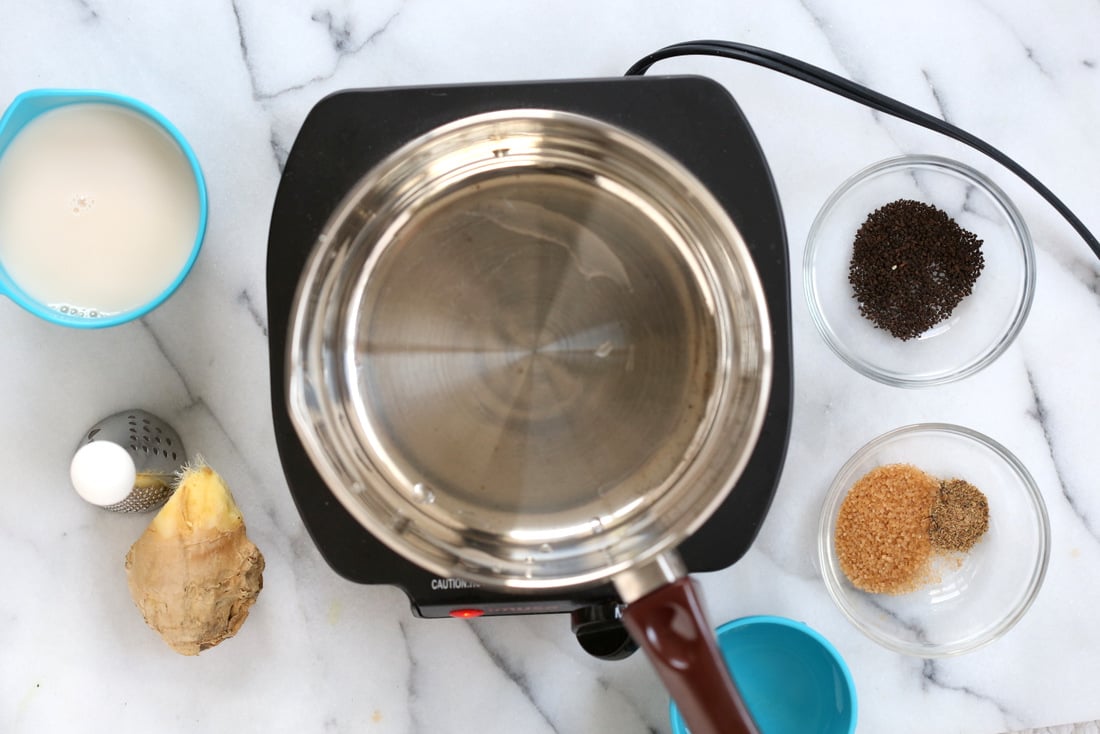 Boil the tea, chai masala, ginger and sugar in water. Bring to a rapid bubbling boil. Bring to just about a boil, then strain and serve.
This creamy Chai Latte. You can also use an infuser. Add the tea and spices to the infuser and keep that in the boiling water. Add the milk, bring to just about a boil. Pour tea in a cup. Remove or keep the infuser in the cup and serve.


How to make a good Vegan Chai Tea 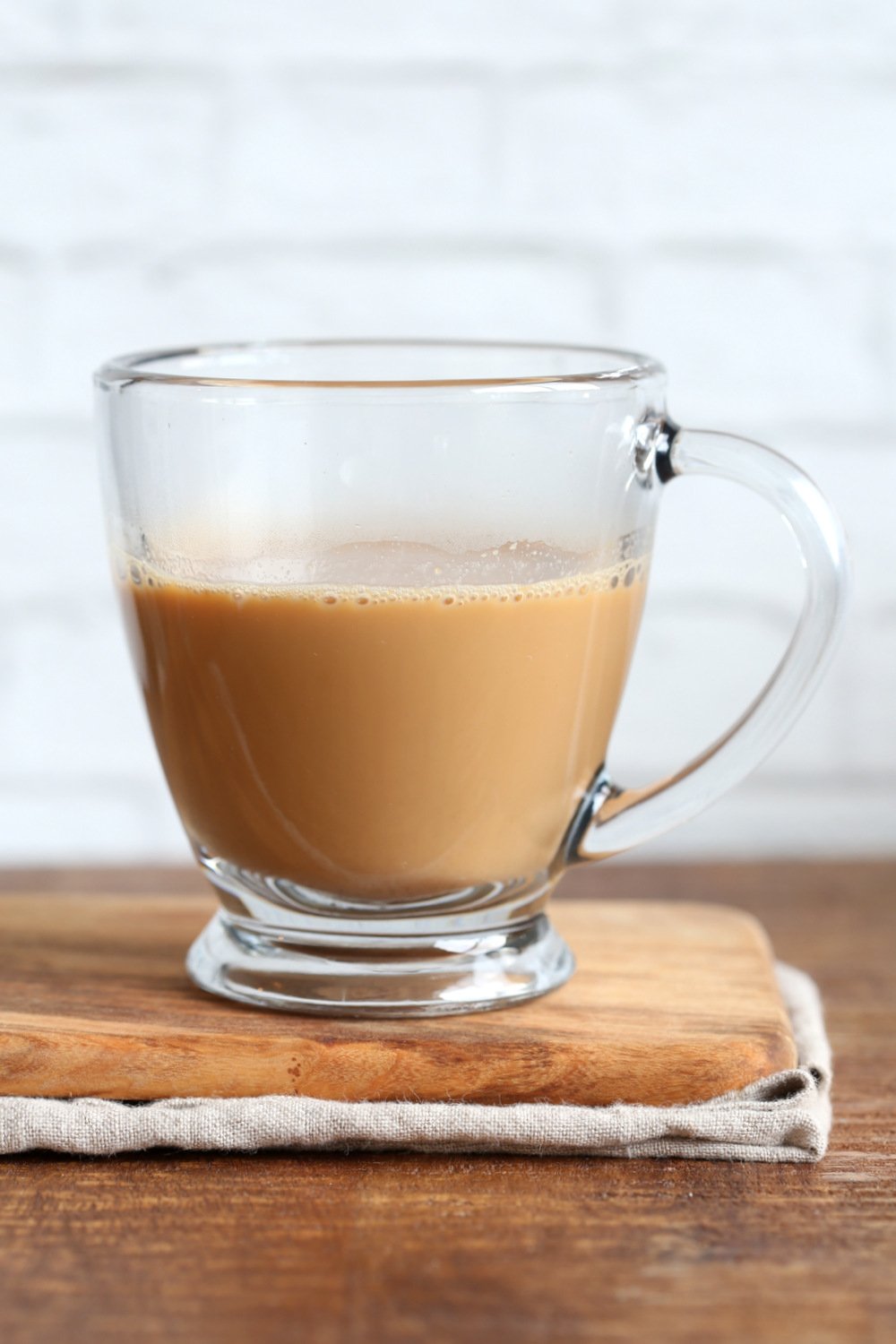 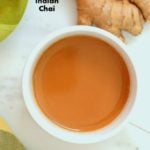