Vegan Keema Naan with Keema Lentils, onion, carrots and walnuts. This lentil mix with the herbs and spices make a vegan version of keema. Serve over Naan bread or Pizza or fill tacos or wraps. Vegan Recipe, Can be gluten-free and soy free.  Jump to Recipe 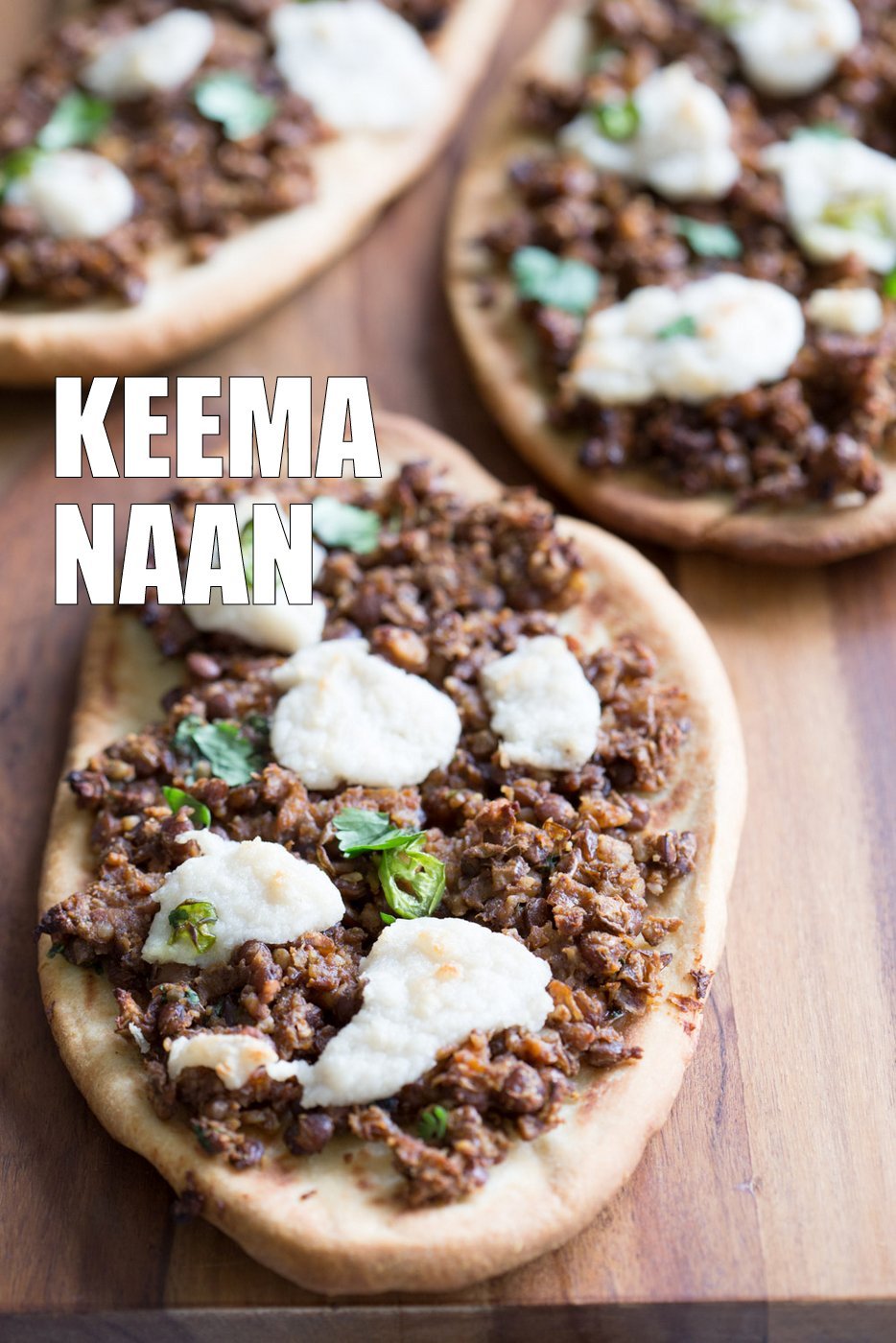 Keema means mince, usually used to refer to meat. Keema as an Indian dish is well spiced, sometimes cooked with a bit of onion tomato or onion sauce, is served as a main with a side of veggies/some curry and some flatbread or rice, or served as a snack. To make a vegan version I use lentils, carrots and walnuts to add the earthy flavor, texture, and spices and sage for flavor. If you add bit of broth and tomatoes to it, the mix would be like thick chili with amazing flavor from the spices/herbse

It doesnt really matter whether this has to stand in for a non vegan keema, because the mix of the ingredients and flavors is so amazingly tasty. Call it whatever you like – Some Fabulous Lentil walnut Mix!. Use the filling as you like, in tacos, wraps, bowls, or just serve with Naan/flatbread and some curry, or as in this post, baked over Naan or Pizza with some vegan mozz. So Good! 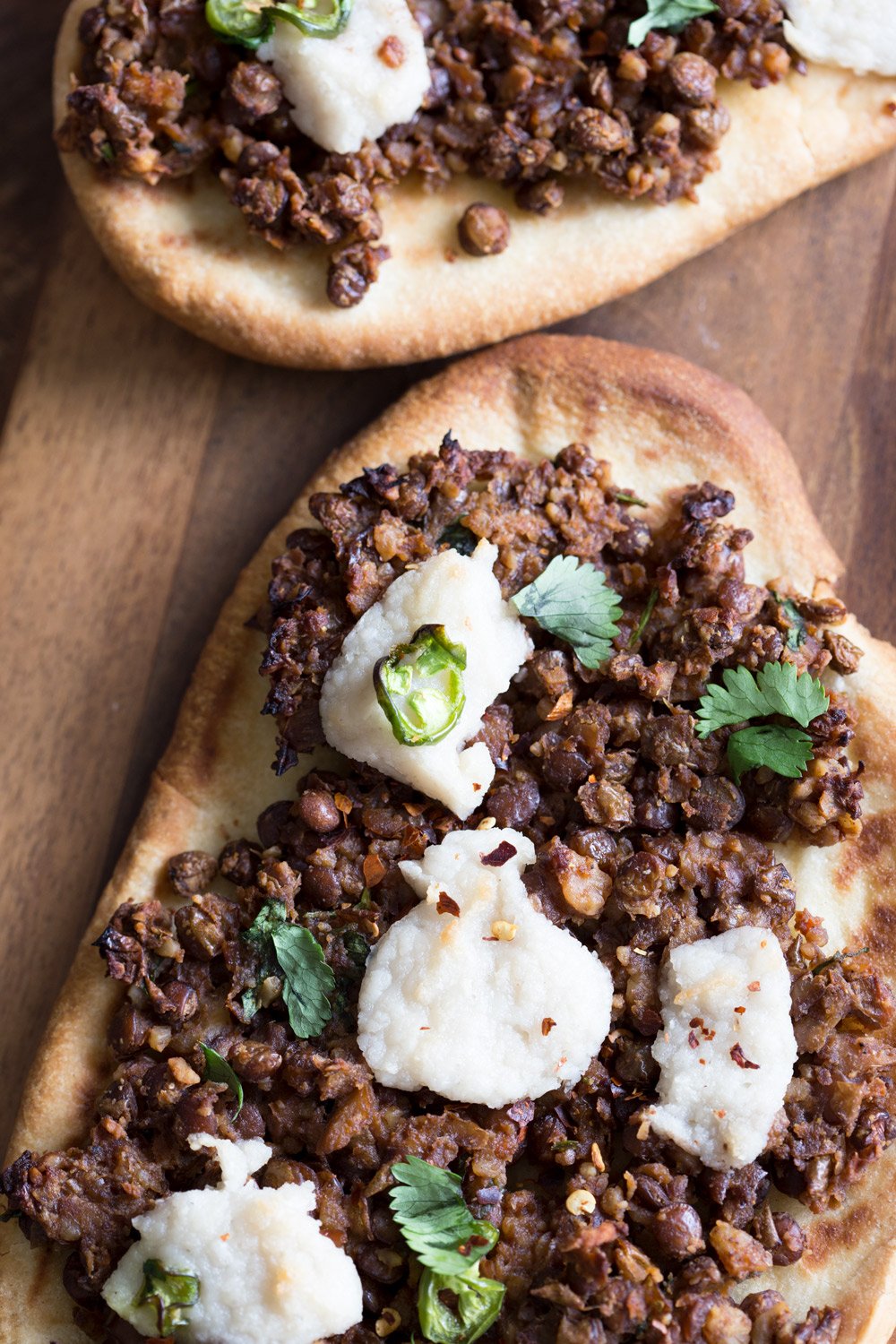 These Keema Lentils are Delicious,
full of flavor, protein (22 Gms!( some of it is from the flour, so the base used will change the number),
come together quickly,
and flexible to additions and use.

The combination of baharat and garam masala adds amazing flavor. If you can find baharat, so use it, else make your own from my Book! it takes 5 mins.. If you make these, do let me know how you served them! 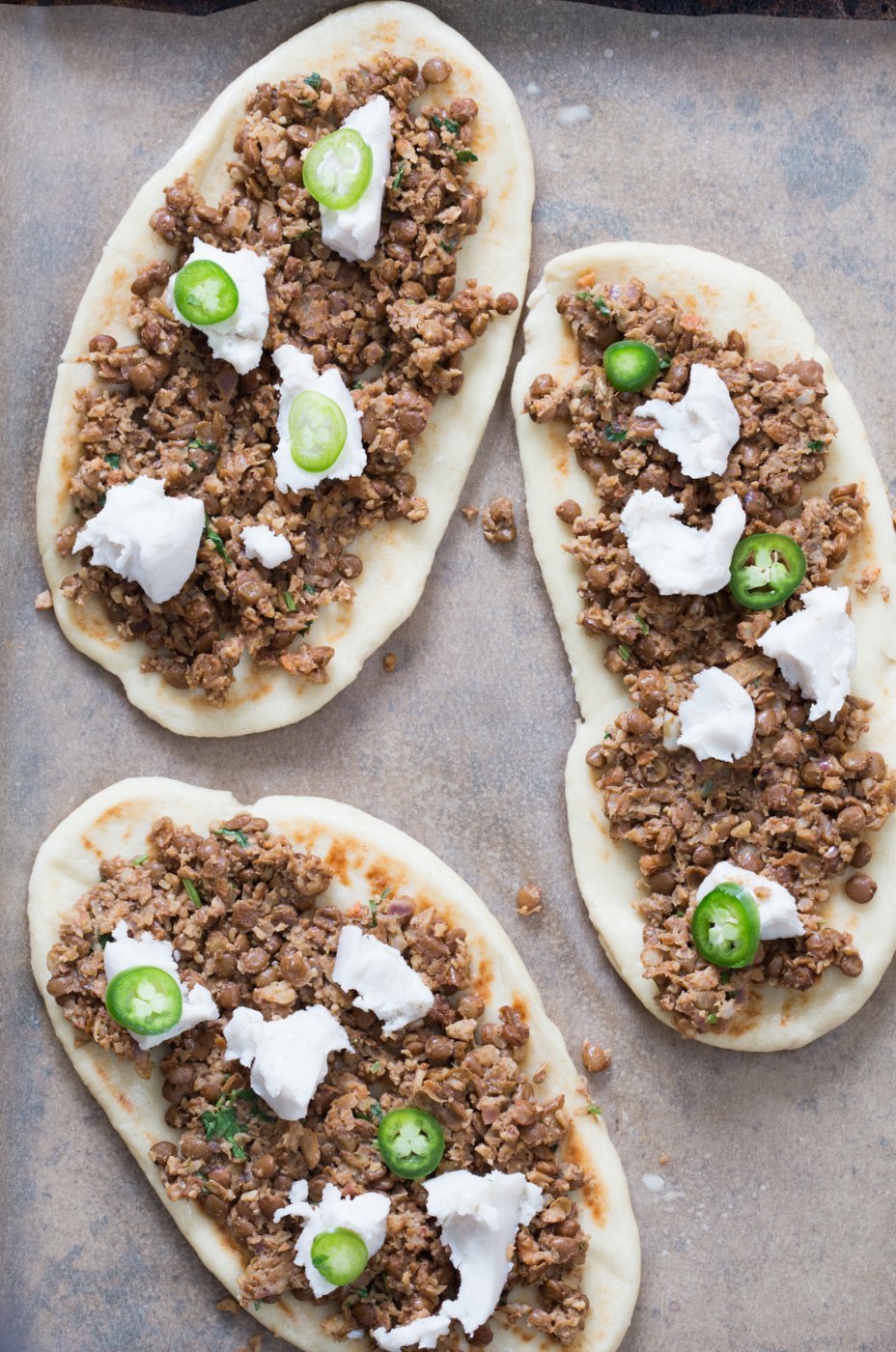 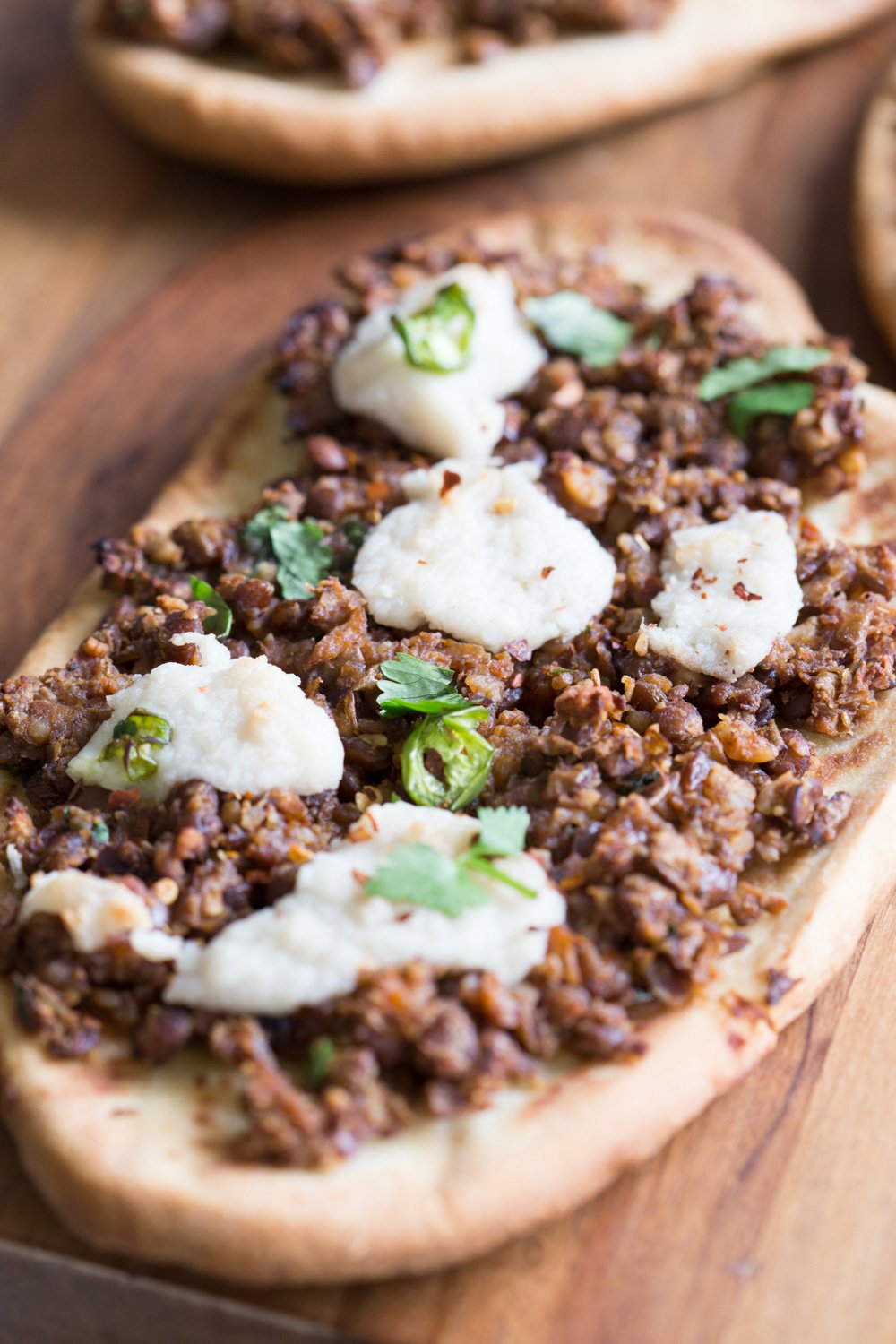 Use a mix of cooked lentils and mung beans/chickpeas for variation.  The keema mix is gluten-free, serve in glutenfree wraps for gf.   For a wet keema dish to serve with rotis, add 1/2 cup water or broth and 1/2 tomato chopped  at step 4 towards the end and simmer for 2-3 mins.   Nutrition is 1 of 3 serves including basic pizza dough 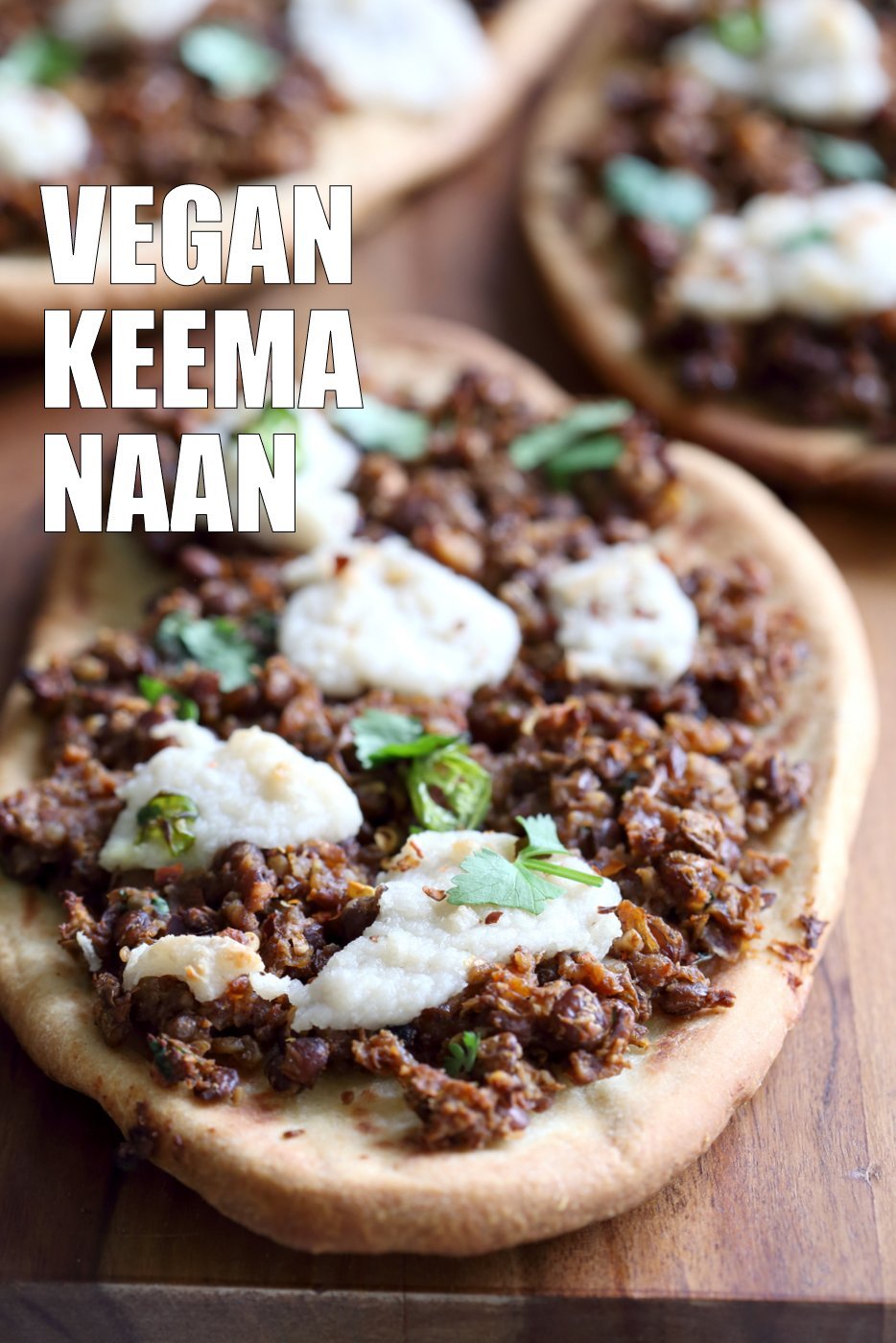