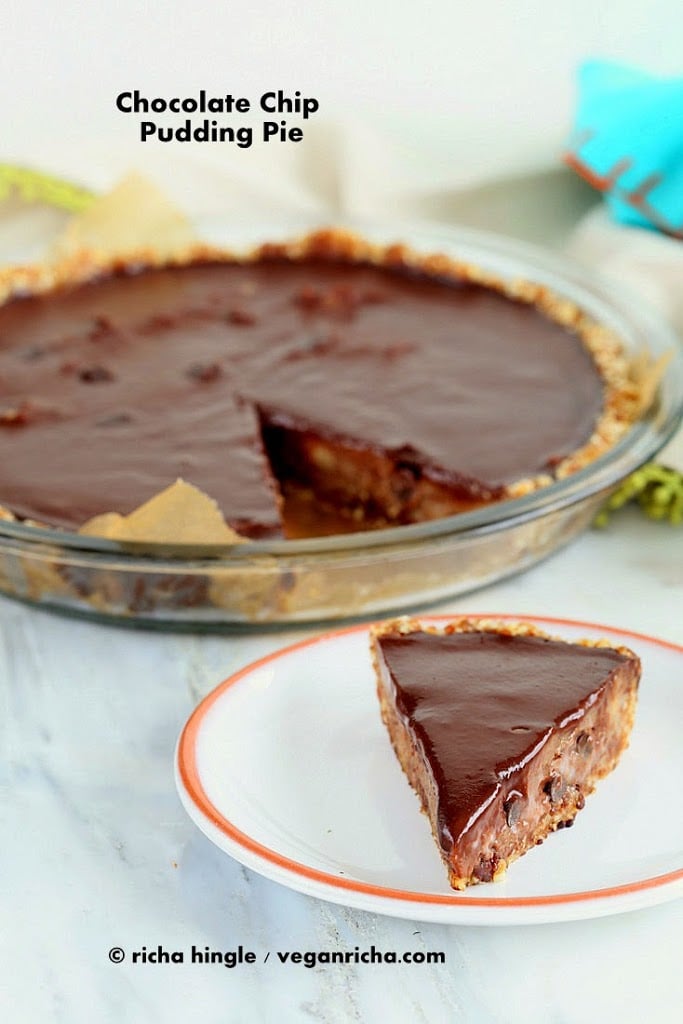 I have been seeing so many pies on the interwebz these days. Some raw made with loads of cashews/nuts and other baked with tofu or nuts or both. I decided to make me one but with less nuts. As I was thinking about what to use as the filling I remembered the banana brown rice pudding.

This pie is filled with a smooth vanilla rice pudding with chocolate chips distributed in it. Crust is almond coconut dates. and topped with a silky dark dark chocolate ganache. Freeze for a bit to slice easily and serve up this melt in your mouth pudding pie. mmm mmm

With no nuts in the pudding, this pie is also lower fat. Did I say it was no bake and mostly all natural sugar. I was wondering about what to call the pie..
Vanilla pudding pie
Chocolate Chip pudding pie.
Chocolate chip Cookie dough pudding pie.

Call it anything really. This deliciousness has to be made.
If you love vanilla and chocolate, you will love this pie! 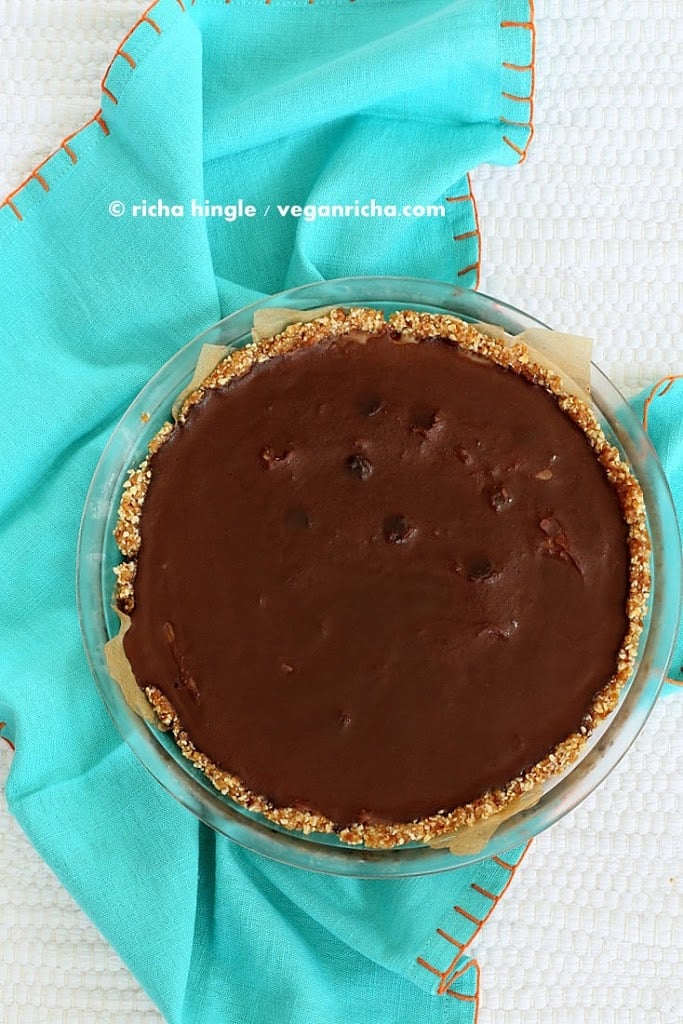 If you are wondering, why I am not so crazy about 2 cups of cashews in the filling, it is because I am one of the vegans whose acne problems did not get better after giving up dairy. We eat almost no fried food, mostly whole grains and limited sugar. And then I read Alicia’s post about how more fat (along with lots of sugar and flours) can be a problem. And surely it is. The week I eat more nuts (snacking goes a bit overboard if there aren’t other snacks in the house), I start breaking out. Also happens after a few continuous days of indulging in high sugar goodies. pfft. I can eat 2 slices of this pie though in the same day without thinking much about them nuts!

First day of Spring yay! and also Meatout day today. Mar 20 is Meat-out day. Eat plant-based all day today and join us to spread the word! Browse through more than 600 recipes on the blog or Try this Vegan Cuts Starter kit!

Eat plant based today for this pretty face 🙂 Our adopted Fluffster, waiting for a carrot. 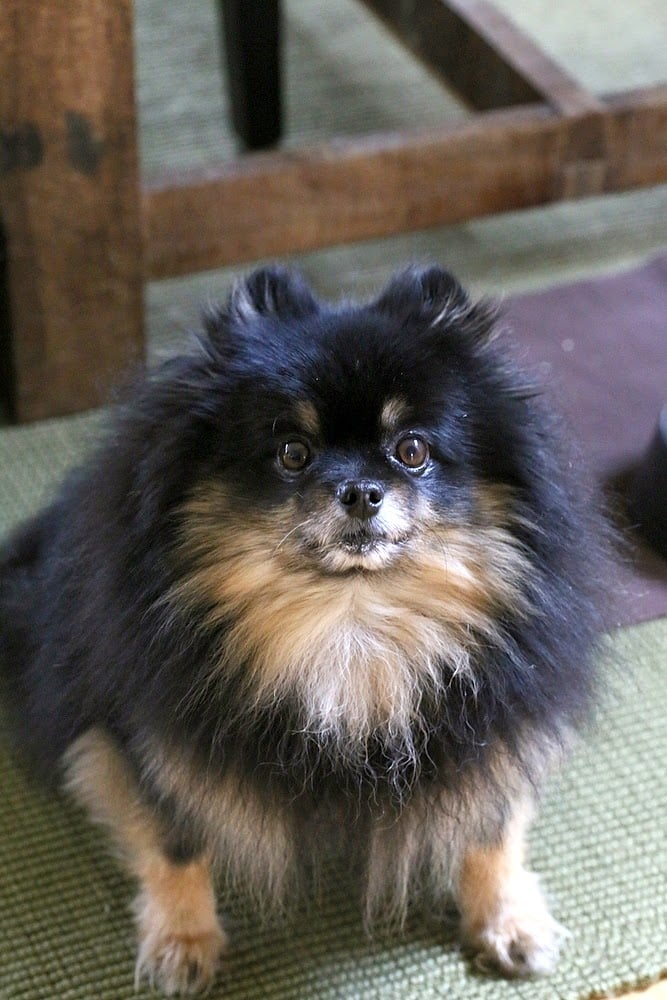 Steps:
Pulse the ingredients for the crust until they come together. Scoop out and shape in the pie dish. 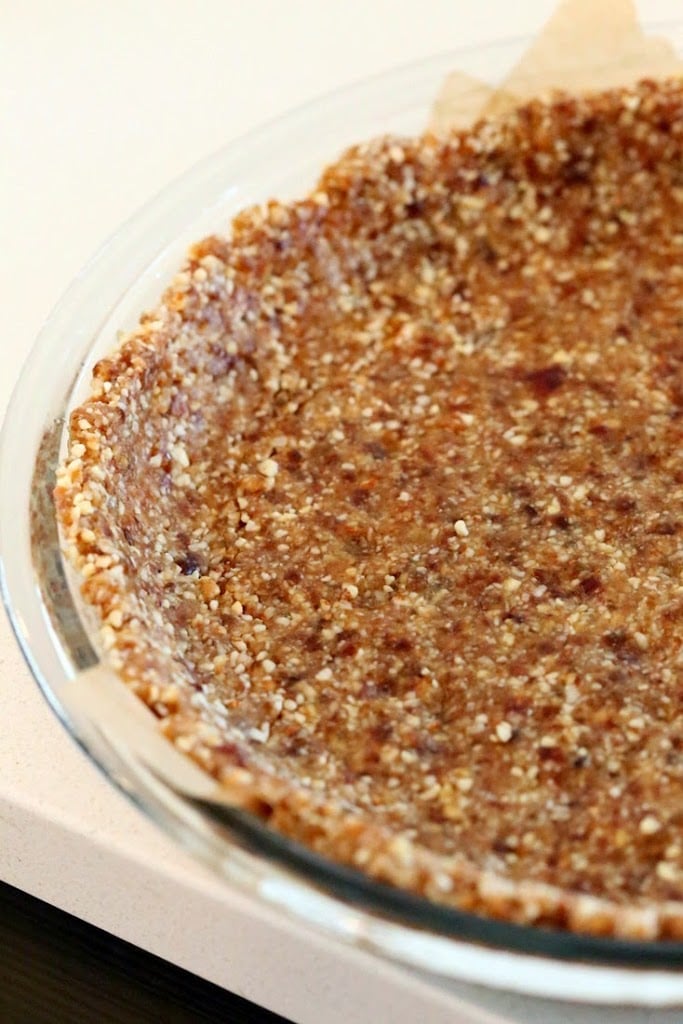 Make the pudding with rice flour, cornstarch and loads of vanilla.

Cool the pudding. Mix in the chocolate chips and chunks and spread on the crust.
Make the ganache and pour out the pudding.
My chunks were from the bottom of the can, so had a lot of  powdered chunks which kind messedd up the pudding a bit by making it more brown than cream colored. To think of it I should just add cocoa powder to the pudding. More chocolate! 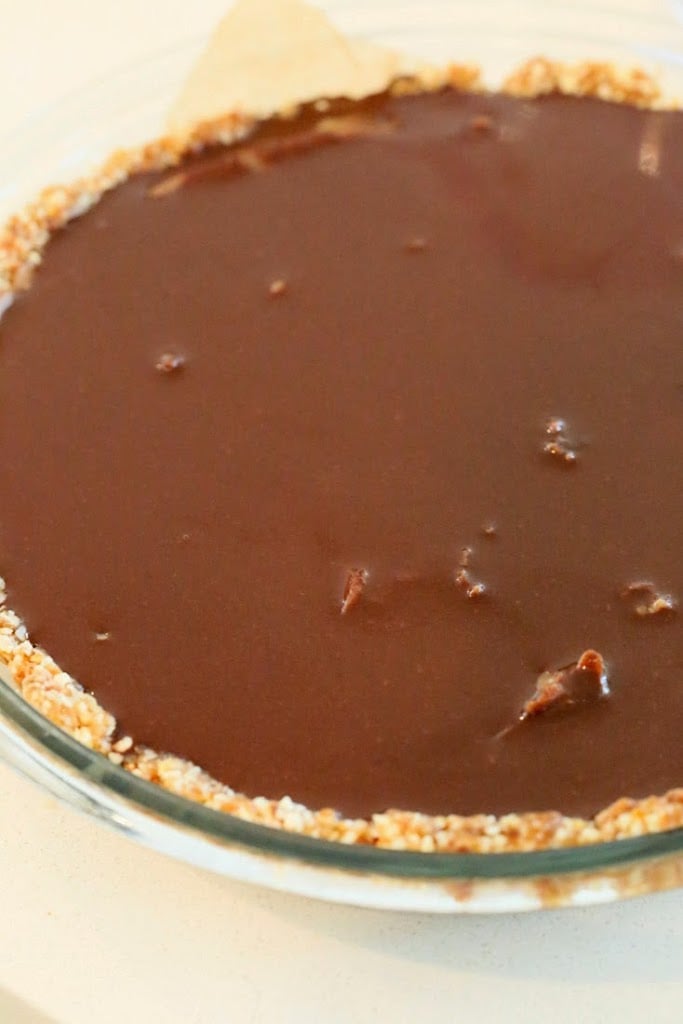 Let set in the freezer for an hour or so. Slice and serve.

Vanilla chocolate chip Pudding:
Heat a pan at medium, add the almond milk. Whisk in the rice flour and cornstarch. Once well combined, add in the maple, sugar and coconut oil and bring to a boil. Stir frequently and cook for another 3 minutes. The coconut oil and maple give a caramel-ish undertone.
Remove from heat and cool completely. Taste and adjust sweet. Mix in the vanilla and chocolate chips and chunks. For variation, mix in 1 Tbsp cocoa powder into the pudding when warm, for a chocolate pudding.
Spread the pudding on the crust evenly.

Ganache:
Heat the milk until just about to boil. Add the chocolate bar and chips and remove from heat. Whisk continuously until the chocolate melts into a smooth mix. Pour this over the pudding.

Freeze for hour or so to make it easier to slice. Serve up extra large slices! Can be kept refrigerated for upto 5 days.
Notes: To make the pie nut-free, use a regular pie crust. Bake it and cool. Use coconut, soy or other non dairy milk to make the pudding and ganache nut free. Fill the pie shell, refrigerate, slice and serve. 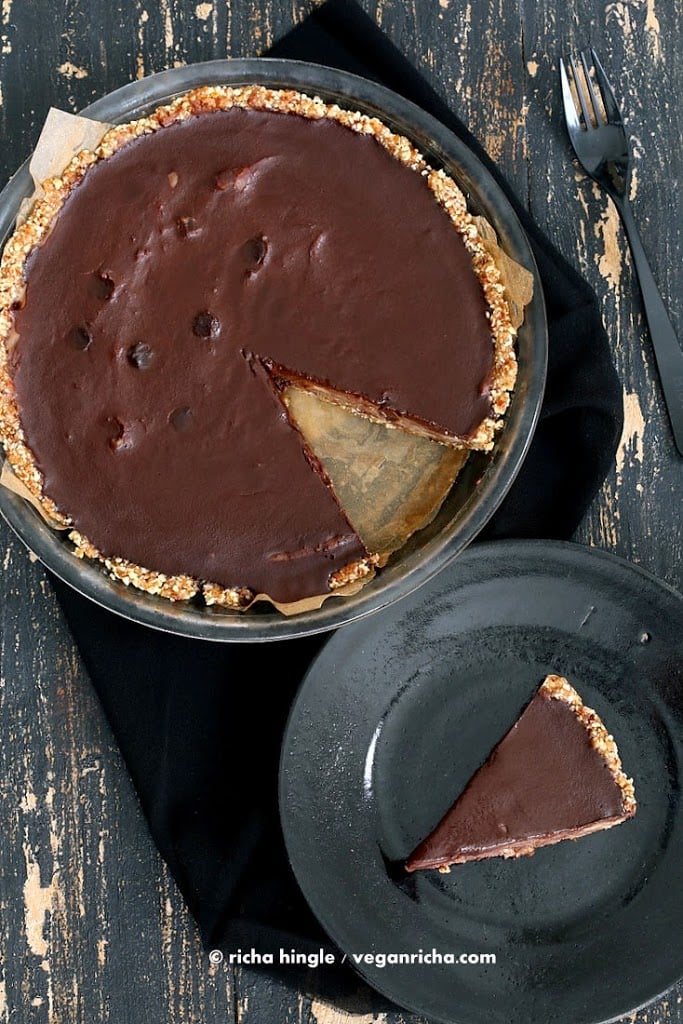 This pie is being shared at Allergy Free Wednesdays, ricki’s wellness weekends. 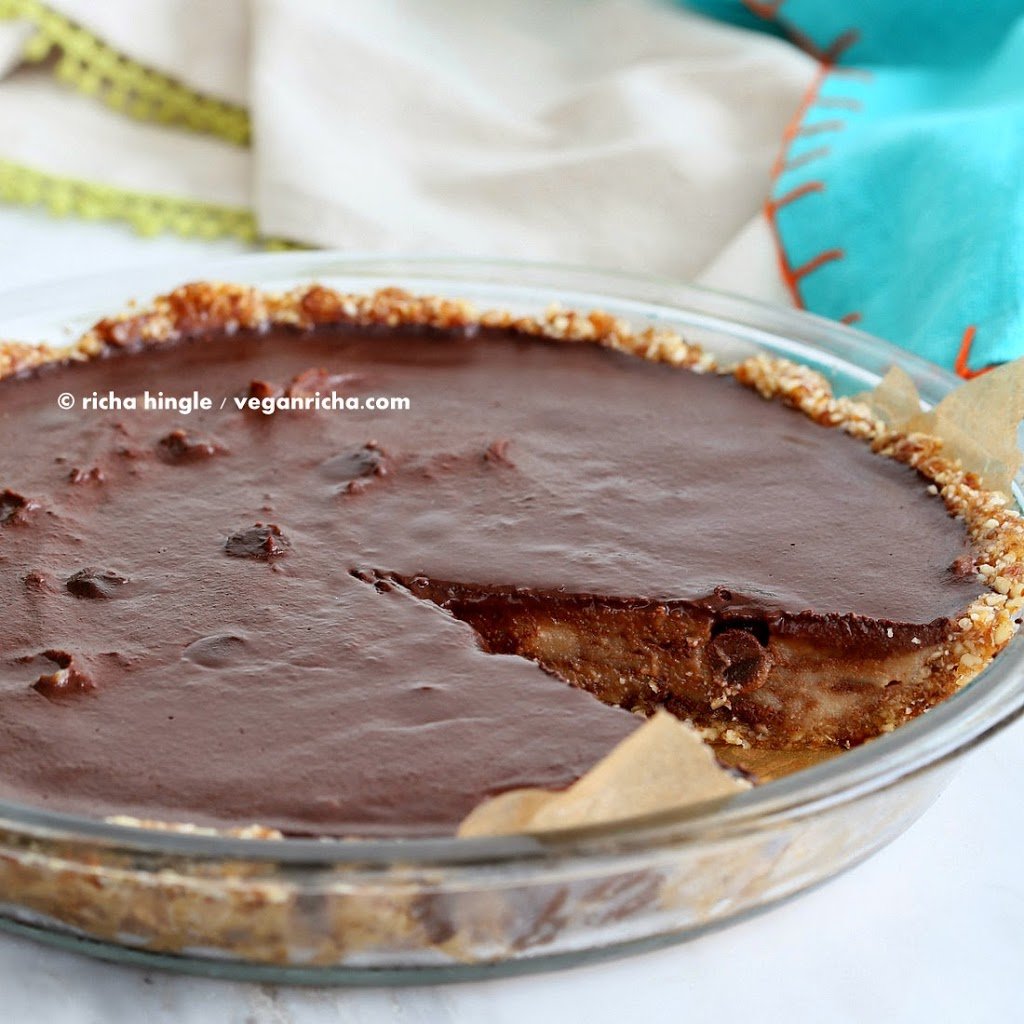