This easy Lentil Brown Rice Soup is a filling meal with carrots, veggies, greens, and spices. Made in 1 pot and takes just 20 minutes active time.

Soak the lentils and rice. Roast up the whole spices, cook onion, ginger and garlic, add in the ground spices, some tomatoes, some veggies, then add in the drained lentils and rice, water, salt and simmer until ready. I used carrots, peppers and some of the broccoflower that was sitting in the fridge. The broccoflower or  Romanesco broccoli has an interesting flavor profile. Use any veggies of choice. Fold in some spinach or baby greens towards the end. Serve this hearty soup with peppery crackers or papadum, or some chopped grilled vegan cheese sandwich croutons.  Use mung beans or black eyed peas for variation. 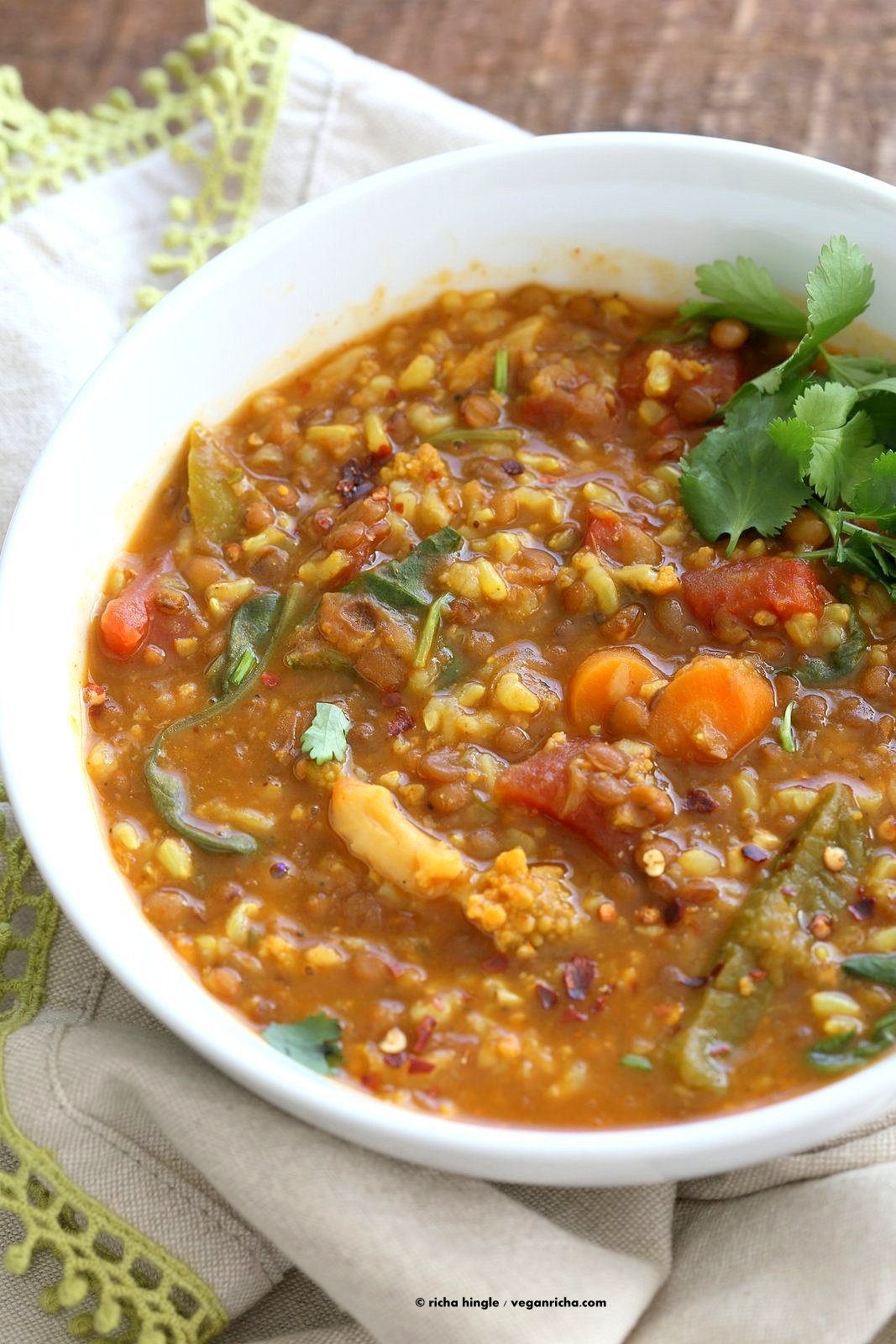 More soups from the blog 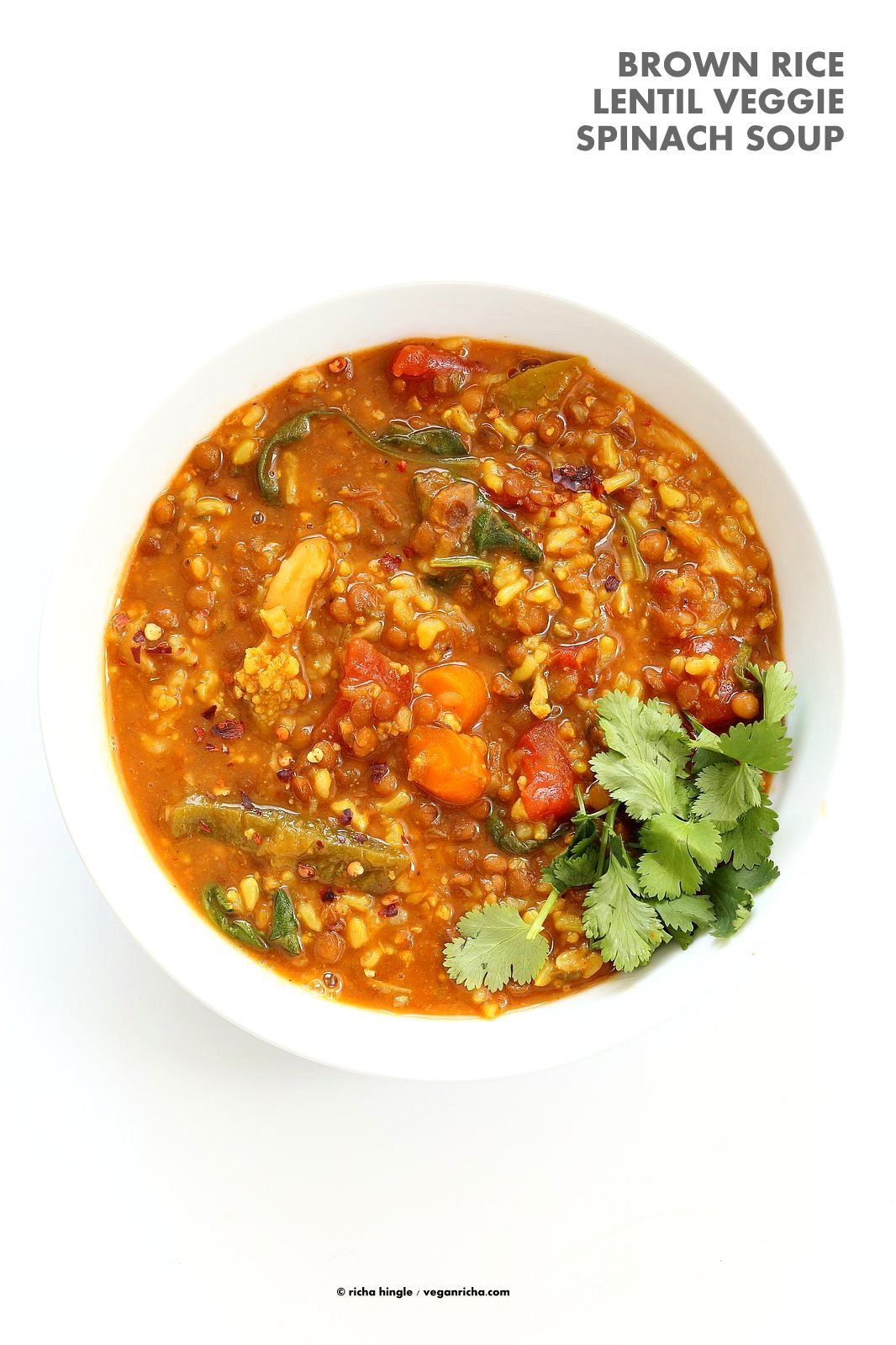 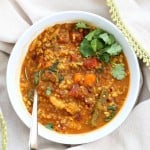 To make this oil free: Saute the onion, garlic, ginger and chile in water or veggie broth. then add all the ground spices, bay leaf and 1/2 tsp ground cumin and continue.   Variation: Use mung beans or black eyed peas instead of lentils.    Nutritional values based on one serving 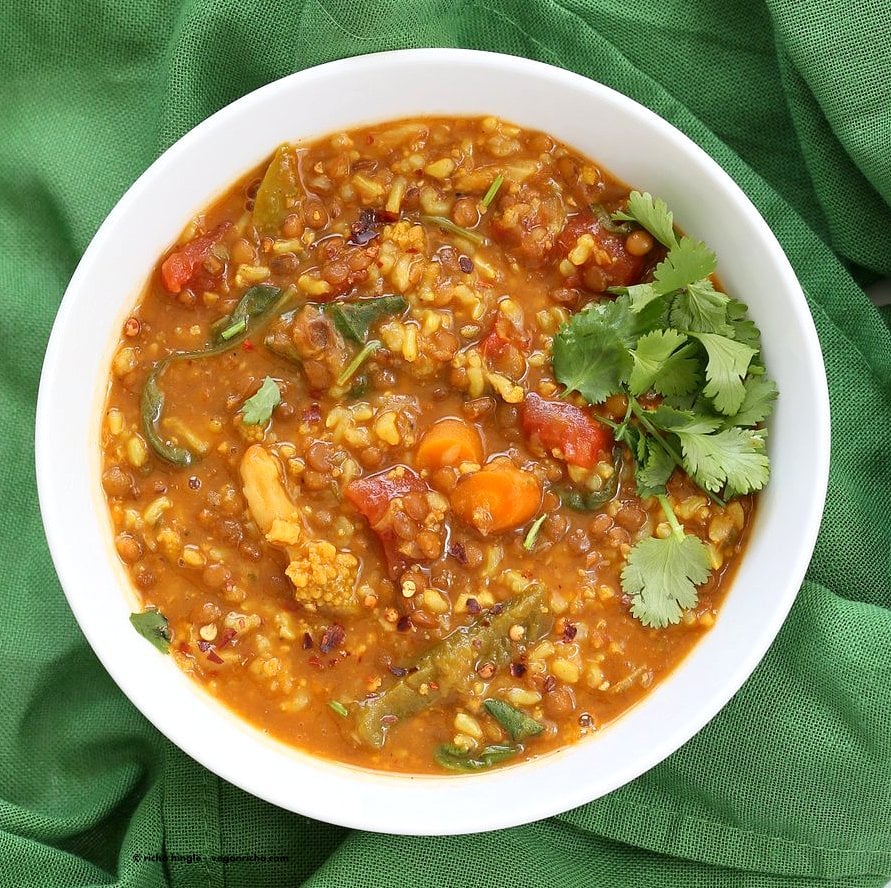 The good stuff. 4 more Circus elephants were rescued from another circus in India! The precious 4 have only seen a life of abuse, torture and malnutrition and the rescue was very complicated and dangerous but eventually worked out. The elephants are responding well to the love by the Wildlife SOS team inspite of decades of abuse. See their story unfold on the Wildlife SOS facebook page.

The Buddhist Tiger Temple in Thailand is being raided right now and all of the 130 Tigers will be rescued and moved to sanctuaries. After many years of undercover investigations, there is enough proof that the temple was illegally breeding tigers,  often inbreeding, trafficking old tigers, and drugging them for people to touch them and take pictures and selfies. Bodies of 40 tiger cubs were found in the freezer in the raid yesterday.

Vegan and eco-friendly clothing store Drizzle and Shine opened in Seattle with items that are kind to the earth and animals and that are made by people who are treated fairly.

Esther, the wonder Pig, the book releases today! Get a copy to read her inspiring story.

Zoos are businesses. Businesses that imprison animals into tiny jails, for people’s entertainment in exchange of money. Contrary to what many people believe, zoos play little role, if any at all, in the conservation of species. The concept of such a for-profit business and entertainment is why Harambe is not with us today.

Who knew that releasing butterflies on events was a thing? Each package holds a butterfly, who had been frozen into a sleep state or forced hibernation. The idea is that as they warmed, they would wake up and released on events. But most butterflies panic and are weak and die. Why would anyone subject those delicate beautiful beings to this.